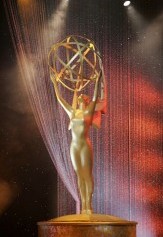 ATI’s, Jim Romanovich spoke to TV Guide Canada’s, Soapgeist, Nelson Branco,  on this year’s Daytime Emmy Telecast.  And while fans were upset over the lack of airtime for soaps, clips of the nominees, and the ATWT’s tribute, plus the insertion of an commercial for the Las Vegas Hilton inside the telecast itself, Romanovich told Branco why it all had to be done this way.  Many industry insiders apparently offered their kudos f on this show being the best telecast in years.  Here are a few excerpts:

Romanovich on saving the Emmys: “Perhaps what many genuine soap fans don’t realize is that the Daytime Emmys were allowed back on TV in spite of the soaps, not because of them. Had we not had a 20-minute tribute to Bandstand (which according to the ratings on the quarter hour was the spike that won the two-time period and the night for CBS) and the Las Vegas Hilton, we would have never had CBS. It would have been over. Therefore, the Daytime Emmys would have been a dinner at the Beverly Hilton. For the daytime community, that’s not a bad thing. It’s still a good, fun night for them. But what the Daytime Emmys represent by being on television is the strength of the content of daytime television. If the soaps have a chance in hell at being looked at as relevant in mainstream America, it has to be [related with what the general public considers] mainstream.  As a soap fan, I’m telling you the sad facts, which is why I have worked so hard to keep the Daytime Emmys on television. The facts are that networks really have lost interest in their soaps. They are not the financial boons they used to be. What’s sadder is that if you poll most television viewers and ask them who Oprah, Judge Judy and Jerry Springer are, they know. Ask them again who Agnes Nixon, Susan Flannery and Maura West are and they don’t know. The soap opera fan alone cannot sustain the Daytime Emmys. Like all awards shows, you need entertainment as that wide net to capture as many fish as possible. If I can do that with some magic and music, while still maintain about an 80 per cent weight to the soaps, then we all win. What I’m hoping to do with the Emmys is prolong their relevance so that these six remaining shows can have a life beyond daytime TV when the Internet and à la carte television options presented to us in the near future is our only way of watching TV. That’s what I tried to do with Guiding Light. ”

Romanovich on ATI and CBS’s plan to make the show relevant in 2010: “If we never came forward and produced the Daytime Emmys in ‘09, what message would that have sent to the broadcast networks? Everything we did for the Daytime Emmys had a grand plan and last weekend was it — to make it big, on a top network, and relevant. Was it the same as 20 years ago? No, because the soaps aren’t the same (or as plentiful) as 20 years ago. As one who is doing everything for soaps I can, I will feature Lion Kings, Kabuki dancers and the roster of Motown if that’s what it takes to keep them on TV.”

Is John Driscoll on his way out at Y&R?

Am I the only person out here that feels a disconnect when listening to Mr. Romanovich’s claims of having the greater good of daytime television in mind when producing these past two years of Daytime Emmy telecasts? Really? Is his goal to represent the best in daytime television or is his goal to simply “air” the Daytime Emmys; because to me, he seems more concerned with the latter than with doing anything substanitive to honor those supposedly gathered. How does he feel his telecasts represent the “strength of the content of daytime television” when a simple element as viewers aren’t… Read more »

Mr. Romanovich’s claims are a big pile of BS!!! I totally agree with the previous writer that they should quit while they’re ahead and go back to the nice dinner/awards ceremony where the people of DAYTIME can be honored and we’re not forced to watch an infomercial of Vegas and a hotel suite and a bunch of Vegas acts that I couldn’t care less about! Using the title DAYTIME EMMY’S as an excuse to air a Vergas informercial is a joke only it’s not funny at all!!! He has his numbers confused because Vegas took up 80%+ of the time… Read more »