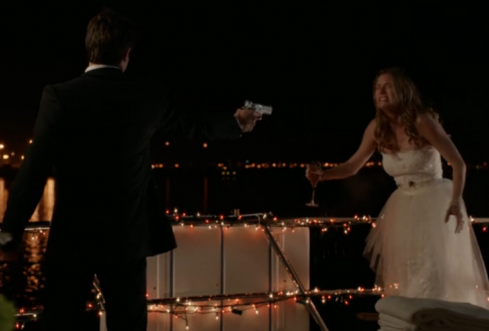 After all was said and done, as viewers watched the set-up go down that was intended to frame Victoria Grayson (Madeleine Stowe) for Emily’s (Emily VanCamp) murder, thanks with an assist from Aiden (Barry Sloane) and some Chloroform, Emily’s plan went awry.   If you read any further, there are spoilers contained, if you have not seen the episode yet!

As all the guests were invited aboard the Grayson yacht post-wedding, Lydia (Amber Valletta) handed Victoria damning evidence showing Emily has been infiltrating her family for years!  Daniel (Josh Bowman) got a phone call from Sara’s (Annabelle Stephenson) roommate that she tried to kill herself!  Patrick (Justin Hartley) came back to the Hamptons and had a reunion of sorts with Nolan (Gabriel Mann), but there is trouble ahead there too!   Can you say, “remote control”?

After Victoria confronts Emily and Aiden executes his part of the plan, lo and behold, Daniel overhears the entire conversation and in a drunken stupor and angry fit over the lies Emily had told to him for two years, including the lie that she is pregnant with their child, takes the gun that is sitting a few feet from Emily, and shoots her twice!  She goes overboard! Daniel throws the gun in the ocean and the cover-up begins!

Revenge showrunner, Sunil Nayar who spoke with various press outlets last week, revealed why the choice of Josh Bowman’s Daniel to have done the deed!  Plus, he addresses, Bowman’s recent statements that the actor wants to be written-off the show! Here are a couple choice excerpts from TVLine!

Nayar on how Josh Bowman reacted when he learned he was to be Emily’s shooter:  “He was blown away… Once we knew were doing the storyline, we thought, ‘We have to talk to Josh before anybody,’ because from his acting standpoint, we wanted to give him as much time to prepare for it and make sure he was nuanceing his performance as he got up to it. He was obviously very concerned, because it’s a big move, and we kept assuring him, ‘We’re going to get you to an emotional place where we’re going to believe that you did it, and hopefully all you guys watching actually believed that he got there. I think he did. He did a fabulous job, but he was knocked out that he was going to be the shooter. But also, in a very legitimate way, we wanted to make sure we were going to attend to the nature of his character going forward, and it wasn’t going to be for simply sensational effect like, ‘Holy moly, I can’t believe it’s Daniel’; it actually informs his character going forward, and the dynamic between Emily and all of the Graysons. With his input, we really got to the right place for it, and you’ll see where we get to going forward.”

Nayar on Josh Bowman’s statement that he wanted to be killed-off: “Josh had gotten himself into a space, because he knew he was doing this storyline, that some of the darkness was in his remarks in a way. He had just such a commitment to where his character was going that he, in his mind, just let it go to the nth degree. When he was just talking to the reporter, he let his imagination get away from him a little bit, just because he was living in the darkest place his character’s ever going to be. Coming out of it, anybody could die on Revenge at any time, so it wasn’t an insane thing to say, but we love Josh and obviously we have plans for his character.”

So, what did you think of the choice of Daniel shooting Emily?  Were you surprised?  When Revenge returns with all-new episodes in January, Emily will have amnesia, which will pave the way for a whole new set of circumstances! What do you think of that plot twist? Comment below!

One Life to Live and Guiding Light's Crystal Hunt Arrested For Smashing Glass On Woman's Face!

I loved it! Love the show; while some may say Revenge has had its day, I’m still an ardent fan. I’ve also liked Daniel; I thought and still think he was an innocent victim of Emily/Amanda…and I had hoped at some point she’d fall in love with him. That would have made for an interesting turn of events as well. As for Daniel shooting her, he was already in a conflicted state-of-mind…feeling intensely for his ex, doing the right thing by marrying Emily, promising to be loyal and a good father…only to feel betrayed. Everyone on this show is trigger-happy… Read more »

Can’t hardly wait for the next season!!
Revenge is a great primetime soap!!
The cliffhanger ending was not expected, not at all..
Everything took a big turn from what was planned,,

In NYC it was preempted right at the moment Patrick reaches for a remote control in Nolans house, what happened? It came back for the end, but a couple of minutes were missed

you can catch the whole episode on hulu.com

@Rob Patrick opened the drawer and found the remote that exposes the safe in the wall with Em’s infinity box, the one behind the painting.

I can not believe that the promos didn’t actually give the whole thing away. I am so happy about that. Everything I saw in the ads was really Emily and Adien’s vision of how the plan should go. Loved the double-cross so that we really didn’t know what was going to happen until it actually did.

if daniel is gone then thier wont be any revenge to have,victoria’s other son is gay and in love with nolan so its gotta be the last season

The revenge was never about Daniel, it’s about destroying Victoria & Conrad. And everyone else that was complicit in David Clark’s destruction/death. So, the show could go on for a very long time if they choose to continue. The writers are very clever and always come up with ways to continue the plotting.

IF Emily had actually pulled off her plan, then I would say the show was ending, but I don’t think that’s the case.

HUH?/ I DIDNT SAY IT WAS ABOUT DANIEL!! I KNOW REVENGE IS ABOUT GETTING REVENGE ON VIC AND CON AND EVERYBODY KNOWS THAT THE BEST WAY TO GET SOMEONE WITH KIDS BACK IS TO HARM THIER KIDS HELLOOO.

As a longtime fan of Emily VanCamp since she was on Brothers & Sisters, I thought it was funny at the wedding when the minister referred to her as Emily REBECCA Thorne.