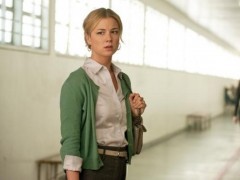 On-Air On-Soaps caught up with some of the dazzling stars of Revenge, and the executive behind the scenes, to get some inside scoops of what is to come, how they like working with each other, why the series has become such a runaway hit, their thoughts on daytime soaps, and of course, some dishy and fun tidbits!  Throughout the week, you will read how these steamy stars truly know how to show us … The art of revenge!

We start with the woman who is at the epicenter of all the bitter vitriol and drama, and who has made Emily Thorne, one gal we would not want to tangle with!  After all, she probably has more up her sleeve than anyone knows, or does she?  Here is our  “quickie” chat with the beautiful, charming, and beguiling, Emily VanCamp!

Your role is so juicy! You must find a way to channel your inner bitch in it.  And what is so great is Emily Thorne vacillates between icy, to being conflicted, in executing her agenda for revenge.

EMILY:  It is a lot of fun playing this part, because any kind of tension I feel in my day-to-day life I get to release that in my work! (Laughs)  I don’t know where that “inner bitch” comes from, but I guess everyone has it somewhere in them, and I get to kind of unleash it every day at work, and that it is fun.

And it’s so different than your role on Brothers  & Sisters!

EMILY:  I needed something different.  I really needed a change and I waited it out.  I didn’t want to just jump into the next project unless I really felt excited about it.  I just fell in love with the script for Revenge immediately.  And actually, it wasn’t one of the favorites that is for sure.  Nobody really knew if people would respond to it and if it would do well, and yet, I just wanted to do the pilot and see where it went from there, because it really spoke to me.  It was certainly the most challenging role I had read that pilot season and the most “juicy” and exciting part.  I could see myself enjoying it for a long time.

There is a big moment in episode 16 called “Scandal” when Takeda is beating Emily  up and he throws her against a wall.  Was that fun to do?  It looked dangerous!

EMILY: Oh my God!  I thought I broke my jaw during that scene!  I woke up the next morning and had a hard time speaking.  So I guess because your adrenaline is running so much, you don’t feel a lot of pain shooting it.  Then the next morning, I was all bruised up. And as an actress, you really want to go for it.  But now I am thinking, “Maybe I should tone it down next time and fake it a little bit,” I suppose.  But we had a great time and Hiroyuki Sanada (Takeda) is incredible to work with!

When you and Madeline Stowe go through scenes together that call for you to be both steely and bitchy with each other, you must laugh after the director yells, “Cut”!

EMILY: Of course we have to laugh.  You have to laugh because it’s so absurd.  I love Madeline so much. We have this great relationship on set and we have this great relationship off set.  So how can you be so evil to this person?  I don’t know, but we manage to do it with a smile, and it’s a lot of fun to play.  However, you have to remember you are acting, because it’s funny. (Laughs)

EMILY: I think so.  But, there is a big game-changer coming up that will be surprising to her and surprising for the viewers that might help gather a few more Team Jack followers!

What do you think about the glamorous clothes you wear as Emily?  She actually is quite the fashion-plate!

EMILY: We get to wear such beautiful clothing, and it’s hilarious because I am not a fashion forward person.  I get to wear this sexy clothing and then put my t-shirt and jeans on to go home.

Why do you think Revenge is so popular worldwide?

EMILY:  I think revenge is just a universal theme.  You say “revenge” and you think of The Hamptons and all the beautiful people and the rich.  And also with this time in America with a bad economy, and people looking for an escape, it all came together with perfect timing for us.  The show has really caught on!

An all–new episode of Revenge airs on Wednesday, April 18th at 10PM EST only on ABC called “Doubt”.   Here is the lowdown:  Daniel’s imprisonment sends Victoria to depths that no one thought possible, as the surprise return of a past love provides a destructive but welcome distraction from her family’s struggles.  Meanwhile, Jack’s search for Amanda grows more desperate as he comes under suspicion for murder, on “Revenge”.

So are you enjoying Emily VanCamp on Revenge?  Who do you want Emily Thorne to end up with Daniel or Jack?  Let us know your thoughts!

Jack Wagner Debuts on Dancing with the Stars! – Watch the Video!

Boss was out sick today-I was bored at work this afternoon with no OLTL, killing time waiting for GH to come on & I thought about Revenge because I recently got hooked on Brothers & Sisters & loved Emily VanCamp so I decided to take a look at Revenge-watched the pilot-had never seen a minute of this show & boy I got hooked, watched 3 episodes in a row-could not turn it off! Sorry GH! Had to tape you for later. LOVE this show!

Thanks so much for this amazing interview! I love this show so much! Might be my favourite new show of all time! Emily Van Camp is amazing in her portrayal of Emily Thorne!! Can`t wait for April 18th!! Revenge is sweet! 🙂

This is a brilliantly written prime-time soap. By far it is the best show on air.
I LOVE this show.
My one qualm, is it goes weeks and weeks without a show, and it takes awhile to catch on what is going on due to the time lapse from the last show.

Ok is that conservitave B liberal B christian b what is it? Enough already remove the B word from your vocubalary!!!

I WANT EMILY TO END UP WITH DANIEL!! They look awesome tofether

I want Emily and Daniel too. They are so cute and happy to know they are dating in real life. Amazing!