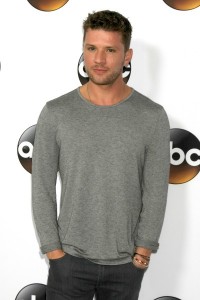 One Life to Live fans will always remember the then groundbreaking performance of a young teenaged Ryan Phillipe as Billy Douglas, the Llanview resident who came out to Reverend Andrew Carpenter.  That  storyline then dove-tailed into one of the most important soap storylines of our time, the beautiful and haunting AIDS Quilt storyline delivered by One Life.

Now after successful motion picture and television roles, Ryan return to TV and ABC with his brand new series Secrets and Lies which looks to have on its surface plenty of sudsy drama for the most ardent of soap fans!

Ryan plays the role of Ben Garner, who becomes a murder suspect in a young boy’s death.  Juliette Lewis plays the detective trying to solve the murder and add up the clues.  The entire series is scene from the vantage point of Phillipe who is in every scene of it!

During yesterday’s ABC TCA winter tour press conference on the series, Phillipe told those in attendance: “This was a completely different work experience, because it’s a forced-perspective show, it’s all from my character’s point of view, which is exhausting. There’s no days off and no scenes off, so in that regard it was a completely different experience.”  He went on to say, “I felt very much in the throes of the material throughout the experience. I mean, every day I was playing a guy whose life was falling apart, who was being accused, who was being slandered … so much negativity in the material.”

But Phillipe then related he knew what got himself into, and how it would be hard to shake when he would leave the set, and was excited for the challenge: “I knew that before I signed on, that that would be a part of it. It seemed like an enormous workload from day one, and it was.”

So, will you be checking out Ryan on Secrets and Lies? Comment below!

Rosie Perez Expected To Be Dropped From THE VIEW!

Have high hopes for this one.