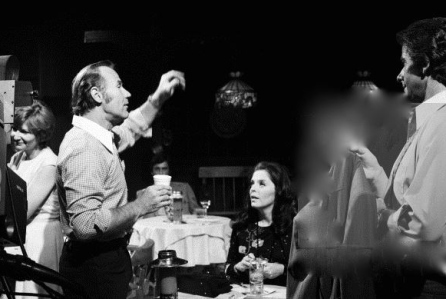 Another one of soap opera greats behind the scenes has passed away.  Fans have learned of the passing of H. Wes Kenney, a seven time Daytime Emmy winner known best for his work on NBC’s Days of our Lives.  Throughout his career, Kenney would also work on The Young and the Restless, General Hospital, and The Doctors.

Kenney died of cardiac arrest on Tuesday of this week at Saint John’s Health Center in Santa Monica, California. He was 89 years old.  Wes had related on the love of his job during an interview with the Archive of American Television: “I  love people. I love actors. I love doing the dramatic shows.  So that’s how I’d like to be remembered, working with terrific people, great talented people.”

And one of those actors who Kenney worked with time and time again was the one and only Susan Seaforth Hayes (Julie Williams) of Days of our Lives.

On the news of his passing, Seaforth Hayes took to Twitter and shared these sentiments and her sorrow:  “Just heard the sad news that Days Producer/Director Wes Kenney went to his rest yesterday. Wes was SO important to DOOL and our lives! My relationship to Wes Kenney goes back to the mid-50s when he was in NYC directing a TV series called MY TRUE STORY. We did one together! Wes Kenney was an Emmy Award winner who directed hundreds of Days episodes in the 60s and 70s. He directed Doug’s first appearance. Wes Kenney was not only talented, he was an energetic, creative, loving man. He was one of the 16 people at our wedding; to us he’s an icon! Wes Kenney produced the first Doug/Julie wedding (in 1976); Al Rabin was the Director. Wes asked us to use our own wedding vows. Wes Kenney produced the wonderful DOOL Variety Show; Al Rabin directed, Ann Marcus was the Head Writer, Jack Bunch staged the numbers..”

Share your thoughts on the passing of Wes Kenney below and Susan Seaforth Hayes’ tweets honoring his memory and his importance below!

Lawrence Saint-Victor Writes Episode Of The Bold and The Beautiful!

Another sad loss from soaps golden area…condalances to his family…NOTE: Heather North was the first Sandy Horton, daughter of Tommy and Kitty Horton, grandaughter of Tom and Alice, on Days back in the 60s and was also the voice of Daphne in the scooby doo cartoon series for many years!!!

My condolences to the family of Wes Kenney and to the Days of our lives family regarding the death of Wes. I am a long time fan of Days dating back to 1966. So many of the episodes I enjoyed during the 1960s and 1970s were because of Wes Kenney. So I guess at least part of his legacy are fans of Days who enjoyed the show during his time there and are still watching today.

H. Wesley Kenney was also the staff director for the 1974-1975 fifth season of ALL IN THE FAMILY.

He was absolutely fantastic on YR in the 80’s. Loved his vision.

R.I.P. Wes Kenney. He was also GH’s Executive Producer from 1987-89, and interim head writer during the writers’ strike in 1988. During his tenure, classic stories and episodes included the Duke/Anna/Jerome story, the Ned/Monica affair, Robin held by Grant Putnam’s dog Satan, the Frisco/Felicia/Colton triangle (my favorite at the time), interracial couple Tom & Simone, the classic/infamous Dragon Bone adventure, and who can forget Sean and Tiffany’s wedding (youtube that one if you haven’t seen it!)?

When you watch soaps properly there are ALWAYS writers and producers you followed even in the pre-VCR days. You missed another show to watch a person you loved switch to a show you never thought of watching…AND GOT HOOKED…R.I.P. WESKENNEY…you got BILLBELL with you now to talk over all the wonderful memories.

Wes Kenney will surely be missed by all the people on all the soaps he worked on. He sounds like he was an amazing man. I will keep him and his family but especially him in my prayers.