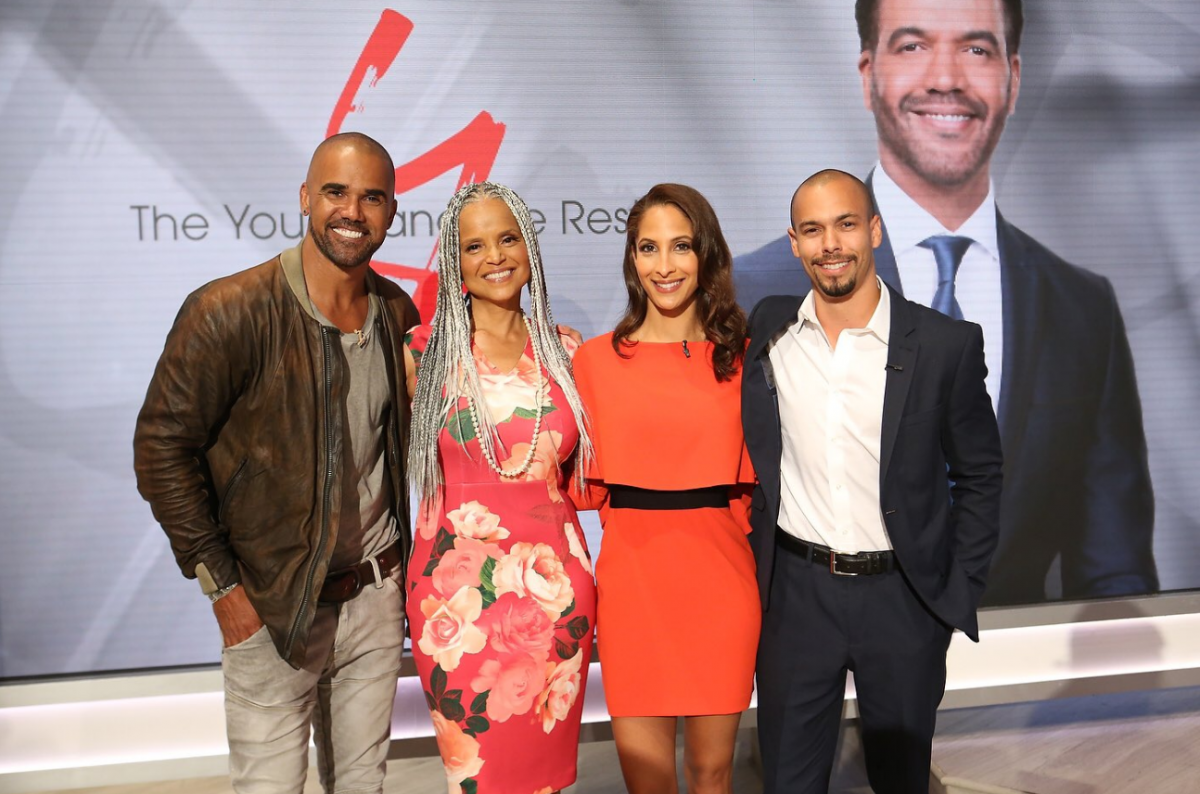 For the first time in more than a decade, Kristoff St. John’s TV family was reunited on television on Friday’s episode of The Talk.  Shemar Moore (Ex-Malcom), Victoria Rowell (Ex-Drucilla), Bryton James (Devon) and Christel Khalil (Lily) chatted with the ladies of The Talk and reflected on what the late Kristoff St. John meant to them personally and professionally.  Each actor shared stories and the emotional impact St. John has had on them.

Shemar Moore revealed the audition process for the role of Malcolm Winters, his first big break.  Moore shared that it was Kristoff who wanted him for the part and how he owes his career to his TV big brothers. “I danced with him for 10 years and we’ve been brothers and so close for 20.  It’s sad to say goodbye, but we have to celebrate all that is good in his heart — his heart was huge for so many of us.  Without him I honestly wouldn’t be in this business the way that I am — or maybe, not even at all. He picked me on April 6, 1994, he told creator William J. Bell that he wanted me to play his brother,”  expressed Moore.

Victoria Rowell reflected on her fourteen years working with Kristoff as his on-screen love interest: “I just want to say, being here is family, this is family… this is incredible for all of usto be here.  And also, I want to just remind everyone that the fan family is also mourning at this time.  There was an instant connection… from the start it was effortless to work with him. He was very serious about his work, I could see that instantly.  And I was very nervous, like Shemar, because it was my first love interest on television.  He just made it fun and he just always protected me. And as a woman in entertainment, it meant so much to me that for fourteen years my TV husband was just always respectful and loving.”

Christel Khalil was overcome with tears, when speaking of St. John and how he was like a true father figure to her, and how, if it were not for St. John, she would not have gotten the role of Lily and had the career she has had.  Bryton James talked about how St. John was both like a father and a friend to him.

Following the airing of The Talk, Moore posted a video on Instagram and shared one of the final texts that St. John had to send to him.  You can watch him read it below.  Then check out two clips from The Talk featuring the Winters foursome, and finally, and the Instagram post that Moore shared with Kristoff’s words from the text message from St. John.

“So it’s sad to say good-bye but we have to celebrate all that is good in his heart. His heart was huge for so many of us. And so I wanna read to you one of the most recent and last texts I got from him.” – @shemarmoore on his last text from @YandR_CBS star Kristoff St. John. pic.twitter.com/K0bRB3BfFa

A TEXT recently before his passing…. FROM….. KRISTOFF to ME….. there is NO EGO intended with this post!! ONLY….. UNCONDITIONAL LOVE… FRIENDSHIP….. BROTHERHOOD… MUTUAL SUPPORT…. PRIDE… LOYALTY… NO JEALOUSY… HUMILITY…… and…. KRISTOFF’S insanely HUGE HEART…. and…. represents HIS BELIEF IN ME and HIS IMPACT on MY LIFE!!! ❤️❤️❤️👊🏾👊🏾🙏🏾😇🦅 #neverforgotten 🕊🕊🕊

So, what did you think about Friday’s segment on The Talk? What do you think about the heartbreaking last text received by Moore from his on-screen brother. mentor, and friend, Kristoff St. John? Share your thoughts via the comment section below.

It is a sadness and loss when a loved one passes on..
Kristoff St.John will be remembered and missed, but his death has become too much fanfare; tipping on overkill.
And-
I really dislike when people say ”Rest In Peace”
is a soul to rest slumber and that’s that
I see an onward- the proper send-off;
”Have A Blessed Journey”

I told family/friends; do not give me ‘rest in peace’ but bless my journey to whatever lies ahead.
I’m not going to Rest I’m moving onward.

Ok you could be no more wrong a business that does not want you? Absolutely false I have never seen so much love expressed! Stop with the color of your skin !!! We are all children of God he loves us all!

I’ll just say it: this is way too much. A tribute doesn’t hurt anything, because the show is on 52 weeks a year. But this is ridiculous; he wasn’t Tom Hanks or Denzel Washington or Meryl Streep. He was a C-list actor on a soap opera. If they did this much for Braeden I could understand. Months and months would go by and he wasn’t even on the stupid program.

A tender,loving, genuinely beautiful tribute. Peace be yours