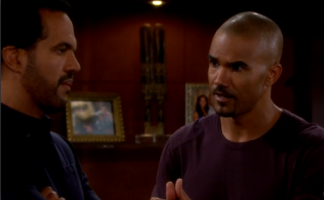 Day two of the return of Shemar Moore (Malcolm) to The Young and the Restless packed an emotional wallop … as Malcolm finally wore down his big brother enough to get him to finally admit he is scared that he may never see again!

Neil (Kristoff St. John), who has been blind since his accident, has been pushing the entire family away and his new wife, Hilary (Mishael Morgan).  The now very-wise version of Malcolm gets Neil to see what he is doing, and to let people help him, and to take a hold of what has become a handicap and turn it around, and learn what he can to help him participate in the world again, i.e. learning braille, etc!

Later, after Neil has his long overdue emotional meltdown over his blindness, the two brothers are listening to some music per the album Malcolm brought Neil as in walks Devon (Bryton James), Lily (Christel Khalil) and Hilary.   Malcolm asks Devon before he leaves if Hilary is a good woman, and Devon says, “yes”.   Of course, Malcolm has no idea that Hilary and Devon are in love.

In more emotional scenes, Malcolm says goodbye to his family, and his big brother, before heading off to his next photography assignment.  Major acting kudos go to Kristoff St. John and Shemar Moore for some hankie-filled moments making us all realize how talented, and how great it was to see them share screen together, and the bond that they share.

Watch two major moments from today’s conclusion of Shemar Moore’s return visit to Y&R! Then let us know, what you thought of the performances and scenes today between Kristoff and Shemar as Neil and Malcolm Winters!

George Clooney To Appear On Special Episode Of Downton Abbey!

DAYS Casting Two New Roles! Who Would You Suggest To Play Them?

It was refreshing to finally see some good old fashioned character driven scenes.
I thought the scenes between these two brothers was well acted and well written.
Malcolm has grown up–the former screw up is now the wiser of the two brothers.
Well done–more please.

The actors made the most of what they were given (which was pretty thin) but all I could think about was that totally random scene at the Park Cafe — it looked like the old terrace doors from Brad’s house collided with the Chancellor Park set (and not in a good way).

Alan, You said the following, “The actors made the most of what they were given (which was pretty thin)…..” Just to let you know, Kristoff and Shemar did not like the original scripts that they were given. Which leads us to know that both guys went to Jill Farren Phelps and asked her about redoing the scripts because they really didn’t do a very good job of really addressing the long history between the two characters of Neil and Malcolm. So, these scripts that they did shoot was a major improvement over what they originally had to work with. I… Read more »

These two days with Shemar Moore back as Malcolm was superb and sublime! Wow! Talk about mining the long history between these two characters and the actor’s themselves as well. Neil finally coming to terms and acknowledging FINALLY that he is scared that he will never be able to see again had me in tears. Kristoff St. John had better get an Emmy nomination next year. If not, he will have been robbed. This is a fantastic storyline for Kristoff and I can see the Academy handing him an Emmy nod next spring.

I agree with your every word, Michael. I have to admit that I never thought Mr. St. John was much of an actor but those two episodes with his brother proved me wrong.
Those scenes reminded me of what hooked many of us onto soaps in the first place.

Because of Shemar’s work in primetime and films his actor’s energy now has game and brought up all around him. Same thing with Meredith Baxter, may I add. It’s not the soap stars’ faults per se, but the recent jolt on Y & R has been exhilerating and fascinating…yep, everyone rose to the occassion.