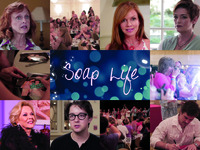 Lest you think that the emotional toll the last few years have taken on soap fans, soap actors, producers, and anyone involved with the medium, is not going to be documented or has somehow gone unnoticed by an entity that wants to shed some light on the culture to the mainstream! Well, On-Air On-Soaps is here to tell you that a new documentary about the changes taking place in the world of daytime drama is prepping itself for distribution.

The title of the documentary project is: Soap Life – A Documentary on Daytime, and as we have all collectively watched, or have been a part of,  more classic soap operas have been cancelled.  So the company behind this documentary, NYPS.TV has interviewed many of your daytime favorites in front of the camera and fans around the country about the landscape of American television that is going through unprecedented changes. They’ve spoken with executives, and a number of current and former daytime stars to get their perspective on what it all means and what lies ahead.

Right now, they are trying to raise the last amount of funds needed to finish their documentary.  So they have posted their project on Kickstarter.com, with the hopes that within next few months,  the money they raise will help this film become a reality. The donor gifts include a pre-order of the DVD, a collectible poster, an invite to the film’s premier, a special thanks in the credits, and the chance to make an appearance in the documentary.

Watch a trailer for the film below and then let us know, what you think of the concept? Don’t you think its time that people should know what viewers around the country, and the stars that have made the characters you love to love and love to hate, feel about the downturn in the soaps and losing these legacy shows that are like family members?

Is Kirsten Storms getting ready to check back in to General Hospital?

James DePaiva added to the list of guests on The View Salutes OLTL!

I look forward in looking to this documentary.

me to from canada

Why Gary Tomlin? All he knows how to do is ruin soaps.

Excellent concept. Video looks good. This should be of interest to everyone interested in daytime drama.

This is great! Maybe it can shed some light for me as well. Is this an era of higher and higher shareholder profits and shows with low production costs (i.e., talk, reality & variety shows) or are soaps really a dead genre? I dunno. Spanish-language soaps (telenovelas) and the UK soaps (“EastEnders,” “Coronation Street,” “Hollyoaks,” etc.) seem to still be doing well, although certainly not at their zenith. Perhaps it’s a corporate America greed thing. It still boggles my mind that we’re down to only four soaps! When I started sampling the daytime drama buffet in the 1970s, there were… Read more »

Sounds interesting although I would have liked a little more variety. Of the names I recognized only Eileen Fulton was from a non-ABC soap (although Bobbie Eakes and Crystal Hunt did have prominent roles on another network in addition to ABC).

Hey Michael, when does the “RIP” go up next to All My Children?

He’s probably waiting for OLTL to end to do it in one shot.

I don’t think you actually watched the promo. Eileen Fulton does not appear in the promo. The actual promo (if you click on the video link) features Rick Hearst from B&B as well as Gary Tomlin from DAYS.

If it can show people how valuable these shows are, I can’t wait to see this documentary either! I’m all for it!