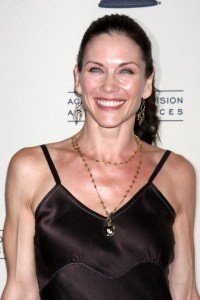 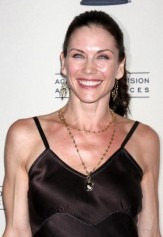 There is no doubt that Stacy Haiduk can be handed material so crazy, so absurd, and yet make it so tangible, compelling, dramatic and incredibly powerful and sad.  And yet through all the convoluted storylines and plot twists, and the multiple times The Young and the Restless have written her dual role of Stacy and Emily into a corner,  Stace and Em seem to keep popping back in to Genoa City, only to once again be thrown to the wolves.   So what gives?  In the new issue of Nelson Branco’s Soap Opera Uncensored he talks to the talented Haiduk to get the lowdown on what went wrong at Y&R.  Here are a few interesting excerpts!

Haiduk on her last big reveal where Patty shot Jack at his and Genevieve’s wedding, in which in turn that cliffhanger caused a ratings spike:  “Yes they did!  And then, goodbye Stacy! It’s hard as an actor to deal with going back and forth to a show, especially when you really like the people you work with. You start putting up these guards up or shields because you don’t want to get hurt. It’s hard… the first time I was let go, it was devastating Out of the blue Y&R changed my storyline dramatically and drastically.  They didn’t go down this path with Emily, who was supposed to become dark. Remember Emily was becoming anxiety-ridden when she thought someone was following her? Well, that story ended rather abruptly. There was a bigger arc to it…”

Haiduk on what her status with Y&R is at this point:  “My contract was for six months. To be very blunt and honest, I was scheduled until March to fulfil my six month contract but they didn’t do anything past January. I basically worked for three months. I haven’t been asked back since my contract ran out. They never called to say, ‘Thanks very much, but that’s it.’ Shocking, right? But it’s funny because a lot of fans have been asking me what is up because they didn’t really write me out of the show.   I would like to see Patty like she was when she was Mary Jane. “I’d like to see her more romantic. I’d like to see her fall in love with someone — someone who isn’t Jack! There is so much to the character because Patty is not a bad person.  She’s very smart.  If Adam and Victor Newman could be redeemed, so can Patty.

So what do you think of Haiduk being ushered off the canvas? Would you like to see Emily or Patty return to GC?  Let us know your thoughts!  In the meantime, Haiduk is working again and has landed a role  a new series for A&E called Longmire! She begins shooting next week in Santa Fe, New Mexico!

It is a mess over there and my understanding is they write for two weeks and then wing it and trust me it shows. This show redeemed Kevin, Michael & now Adam all men . Let’s see Maura West they treated like crap and EIleen Davidson twice. Stacy get a nightime gig and move away from this mess.

I do think they did rectify Patty as Mary Jane until she went psycho again. I do think she can be redeemed so I hope they do give her the respect she deserves.

Stacy Haiduk would be a welcome return as Mary Jane, Patty, or Emily. She is so talented.

And poor Paul really needs at least ONE of his family members to get straightened out.

Maybe after someone fires Maria Arena Bell and gets this show back to what it once was, its a TOTAL mess.

She probably wont be re-hired because MAB prob has Tom Wopat and John Schneider waiting to reunite with Daisy Duke.

“She probably wont be re-hired because MAB prob has Tom Wopat and John Schneider waiting to reunite with Daisy Duke.”

As much as I adore and admire the actress, the characters and shenangians were so way over the top, I could not take any more. Such larger-than-life characters and plots are fun for awhile but then they really strain credulity — particularly when not carefully thought through or considered for the future — and it all finally becomes annoying and tiresome. (I cite as current example Sheila and her descendants and their unhealthy fixation on Genoa City. Enough!) I would have loved to see Emily remain on the GC canvas as that rare someone with no past connections by blood… Read more »

I love Stacy and would like her back as Emily, but Patty was just too crazy at the end. Stacy should just count herself lucky to be off this mess of a show and persue some primetime gigs.

They have too many storylines. I actually liked Patty and wondered what happened to her. The show is a mess and I don’t know why they allow it to continue. I guess because it’s still number 1. I think people watch out of habit rather than it’s must-see.

It makes me sad that we didn’t see much of her in her six month contract; Stacy Haiduk is such a rare and talented actress; not to mention jaw-droppingly beautiful. I always looked forward to her scenes and the way she so deftly went from completely off the rails, to tender and compassionate and back again. PLEASE bring Stacy back to Y&R….. PLEASE!!!! 🙂 I am loving Y&R right now, though, and the upcoming story surrounding Phyllis’s past deeds coming to light has got me on the edge of my seat. Bringing back Emily would just make it that much… Read more »

You know the show is run by idiots when they get a powerhouse of talent like Stacy Haiduk and put her in the most horrendous storylines. The only thing that made any of those storylines tolerable was Stacy herself. Watching her perform was mesmerizing. But other than that. . . it was all horrible. Stacy Haiduk deserves better. And so does the show.

Please Bill Bell, Jr., for the sake of the show and your father’s legacy, FIRE your wife. No matter how much it hurts, it has to be done.

I think the only thing that will save Y&R is to get rid of MAB. She gets all these talented actors to come on the show then doesn’t know how to write for them. How on earth did she ever get this job? Oh yeah…she married a Bell.