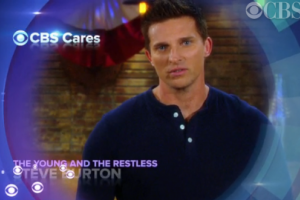 The Young and the Restless, will observe Veterans Day with two episodes featuring U.S. veterans, as well as a CBS Cares PSA that directs viewers to www.VA.gov, beginning on Monday, November 11th featuring Steve Burton (Dylan McAvoy) that raises awareness of education and employment for our U.S Veterans.

In these special Y&R  episodes, Nikki Newman (Melody Thomas Scott) hosts a fundraiser to honor veterans, while also hoping to get closer to her long-lost son, Dylan McAvoy (Steve Burton), who recently completed a tour in Afghanistan. Nikki’s husband, Victor (Eric Braeden), announces a plan to have his company, Newman-Chancellor Enterprises, provide jobs for qualified U.S. veterans, letting people know that he values veterans as driven, goal-oriented employees and advising other employers to seek out these proven leaders.

Y&R invited 12 U.S. veterans from the Army, Navy and Marines and who served in World War II, Vietnam, the Gulf War and Iraq to participate in these memorable scenes, along with actors Peter Bergman and Sean Carrigan, who play veterans on the series.  The show worked in conjunction with the U.S. Department of Veterans Affairs for authenticity purposes with this storyline.

Watch the CBS Cares PSA with Steve Burton after the jump! Then, let us know if you will be watching these very special Veteran’s Day episodes of The Young and the Restless?

I feel Steve Burton /Dylan is very happy, pleased, with his decision to move on to Y&R in a roll that at the least has some depth and meaning to the character Dylan.. Steve Burton as Jason the hit man on GH was not very rewarding for him, a dead end.. Dylan has heart, problems, depth, a life.. Now that Dylan will be involved with the Newman’s as Nikki’s son, I see him doing very well on Y&R and that it is much better for him than being Jason, Sonny’s hit man.. As for Sam’s future, I love the newness… Read more »

I love/ the chemistry between Michael Easton and Kelly Monaco!!!!!

If Ron or Frank can her a baby storyline, I’ll be estastic!!!

Steve burton is donig great things with this story. He brings life to this caricature.

Jason did have heart and he did show emotions. All Dylan does is mope around and is a flat out wuss. He’s boring as hell as Dylan. Sorry, but that’s my opinion. He’s better on GH as Jason.

But having said that, I don’t want steroid boy back in Port Charles. He ruined everything he touched.

Haha, very true. I have come to enjoy General Hospital with him not on it. They are doing just fine without him. The days that he’s on Y&R, I don’t really enjoy. I haven’t enjoyed one storyline of his yet, on the show. But, when he was on GH, I didn’t feel that way. It all comes down to this, where ever JFP goes, Steve goes.

So what is Steve Burton doing for the vets? A scripted PSA gosh I am so over this guy. Try Gary Sinise the actor who has the Lt. Dan Band for 10 years and has done non-stop help for our veterans building homes etc. Tell me has he been to one Veterans home to assist in their needs just another prop by him and that stupid woman he calls his friend.

OMG! GET OVER YOURSELVES!!!! This is about episode to honor our vets you make it about you and you angrier or him leaving Stupid GH. Move on already.

It’s not. It’s gonna be about him. Believe me, I lost whatever ounce of respect I had for Steve. We’re not making it about us. We’d be fine, if this were to honor the amazing men and women who fought for our country, believe me, I have nothing but the utmost respect for them. But, the bottom line is, this is just another way to prop Dylan which is beyond sad.

You bet I’ll be watching the special Veteran’s Day episodes of #YR…and not just because Dylan McAvoy is my favorite character (and Steve Burton my favorite actor) on Y&R. Kudos to Y&R & CBS Daytime for honoring our Veterans in this way and through characters like Dylan & Stitch & their storylines!

Nice to see YR doing something like this and good to know they went to Veterans Affairs to make sure they were doing things right. Look forward to seeing these episodes.

Looking much forward to it!

Well getting used to this character. Loved Jason but this one brings out a huge heart that was hid in GH. Love this story line and working with the V ETS well you ROCK! Anything that joins our Vets into a storyline is huge. Respect all the way. XO

Yes… will be watching! Love Steve Burton and loving him as Dylan! Miss him so much as Jason on GH!!! However I agree with the above posts… this is a better fit for him and a chance to be a different character. Happy to see CBS cares about Veterans and love that they are incorporating it into the show!!! Veterans deserve so much more… but this is a great start in the right direction!!! Soap fans care too!!!

As always, I’m happy that Y&R is at the forefront of something that needs national attention.

Steve Burton is doing great things with this story line. The emotions and heart he brings to this roll are amazing.

Yes, it’s great that Y&R is incorporating the War Vets into the storyline. However, it’s to prop Dylan even more. Which is sad.

I can’t wait. This will get a lot of national attention.

So I’m sure I’ll get hate for this, but do you think Phelps would be doing it if it wasn’t one more way to showcase Burton and his character? I mean c’mon.

I watch YR and will be thinking of my Uncle who served in Vietnam.

You won’t get any hate from me. I completely agree with you. This is all just to prop Dylan even more. Can’t wait till the day he leaves.

Thank you. If he had been introduced slowly like most new characters (especially how YR historically does so) instead of thrust into almost every story, (he interacts with more characters in less than a year than vets do), I think more long time fans may be a little more tolerant of this FOJ.

Jessica, honey, I AGREE!!!!! Forgive me for saying this, but this is not about Veteran’s Day. It’s MORE LIKE about that insufferable soap opera killing W-I-T-C-H Jill Farren Phelps giving her VERY BLAND AS HELL golden boy/lovesick puppy/soap opera pet Steve Burton YET MORE air time. OMG AND YIKES!!!!! How much more soap opera air time does that arrogant and conceited SB need?!?!? And, Jessica…YES…I, also, will be glad once SB is gone (along with that insufferable soap W-I-T-C-H JFP). ENOUGH IS ENOUGH!!!!!!!!!!!

P~ who has the patience anymore because mine is tapped out for YR…It is to simply as perfectly put “to prop up” Steve because JFP needs to try give SB a Emmy nod you know…wink wink!

It’s funny how hard it is to not associate actors with a role after so many years of playing a character. SB will always be Jason to me. He may be great in Y&R but someday if he returns to GH I will welcome home back. Of course I thought the same thing about Cliff left AMC too and we know how that ended up.