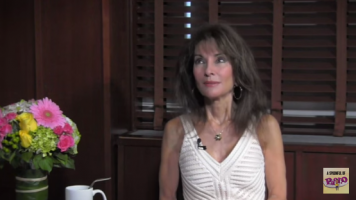 Devious Maids made its season four debut on Monday, and series star and former All My Children favorite, Susan Lucci sat down for a chitchat in the latest installment of  A Spoonful of Paolo, taped in New York City.

During the episode, host Paolo Presta talks with La Lucci about the new season of ‘Maids’.  However, of interest to AMC and daytime fans is Susan’s response when asked if she would ever consider returning to daytime on another soap opera in another role, what she thought of ABC’s ending of All My Children where Erica was possibly shot, and what was one of the most special moments in her career.  In addition, Susan talks about her 7-year-old grandchild Brenden, who suffers from the condition of cerebal palsy, and more.  Here are a few interesting quotes from the interview below!

Susan on if she would ever consider doing another daytime soap: “The door is still open, but I will say when All My Children went off the air, the other shows that have survived and are still on the air, and that have great writers, they had asked if I would be (interested), and my feeling was, you know, Erica Kane was such a special part, and I had the opportunity to play her, and so I wasn’t ready then to go there.   And I wouldn’t do a guest star role.  I just think Erica is a particular character, and I love her, and I don’t want to play another part on daytime other than Erica Kane.  But in terms of now, as Marc Cherry (Creator, Devious Maids) says:  “Genevieve Delatour is a cousin of Erica Kane”.  I get to play a part that the audience loves for the glamour, and she is looking for love in all the wrong places, and yet Genevieve is not street smart like Erica Kane. She is vulnerable and she is romantic, and she’s even a little naive, and she does some self-medicating, so she’s different! (Laughs).

Susan on what was one of the most special moments in her iconic career:  “Certainly, the outpouring from the public and the press during all the Emmy time, and when I did win the Emmy that night will remain with me forever.   First of all,  I didn’t hear it once they read my name … I thought Shemar Moore (Ex-Malcolm Y&R and Ex-Criminal Minds) was announcing the playoff scores!”

Watch Susan’s complete interview on A Spoonful of Paolo after the jump!  Then let us know .. would you have liked to have seen Susan join Y&R, GH, DAYS, or B&B after All My Children?  Do you think Erica lived on following the shooting in the ABC finale of All My Children? Comment below!

Well, I still miss ALL MY CHILDREN and wish that the re-launch on-line by Prospect Park had gone better–Had they secured Susan Lucci – I feel that maybe if they had had Erica Kane maybe the on-line version might have been more successful. Of course, I don’t know for sure if it would have made a difference since the On-line Network was having so many problems. Happy though to see Susan Lucci on Devious Maids, though that show has a loooong lapse between seasons, I almost can’t remember how season three ended.

That was a fun interview. I really miss seeing Susan…and I do love Devious Maids….it’s absolutely hilarious! 🙂

Thanks for posting such a great interview. Long live Erica Kane. And long live All My Children.

She would be great on GH of ABC can somehow get Erica Kane back!

I love SL on Devious Maids. Mark Cherry clearly writes well for Susan, and I enjoy Genevieve more than I used to enjoy Erica. As for the question about whether Erica was shot, I LOVE LOVE LOVE that no one gives any attention to the online show which lasted for a second, because the question of who was shot was answered in that production. I was at a fan event about 13 months after the online show last aired, and Cameron Mathison (who was there) was wondering whom JR had shot. When Vincent Irizarry (who was also there) started to… Read more »

One of the best interviews I have ever seen!!!!! I cried at the end of it! LOVED LOVED LOVED!

Oh, I miss Miss Lucci and ALL MY CHILDREN. Erica was a wonderful character and that show was so well done. I particularly was hooked on such stories as Kendall’s return, the death of Mona, Erica and her fierce maternal instincts with Bianca., her friendship with Myrtle. All that romance!

Still missing AMC. I will always miss it. Nothing can take its place but I would like to see the character of Erica come back. ABC /Prospect Park will not let that happen. ABC destroyed it, it will never be back. I am enjoying Vincent I. on DOOLs. Y&R is not using Michael Knight as they should be. Vincent I. is the only actor from AMC that has been cast wisely.

I loved this interview so much. Him and Susan seemed like bff. GREAT Interview and thank you for sharing Michael. I love coming to your website because you always share wonderful things about our favorte daytime peeps.

I didn’t get to see much of the online AMC revival being that I’m in Canada & didn’t have great access to prospect park. Was any mention ever made in the revival as to Erica’s fate?

It would be fun to see Susan make a few guest appearences on GH as Erica Kane. If Brenda was still on the show, they could host some kind of America’s Next Top Model show together.

ABC bring back the soaps and bring Erica Kane back to life.

If there were ever was a need to have some fierce competition in daytime it would be a ‘crossover” from AMC to GH. With the demise of Prospect Park and AMC I’m sure the execs in daytime could find a way to bring Erica Kane to Port Charles. There are so many open ended storylines with LaLucci bringing her back to life. Think of her crossing paths with so many characters on GH. “Buying out Julian Jerome” and running the empire he once helmed. The scenes with Carly over the hotel service. “I’m Erica Kane! The penthouse suite was supposed… Read more »