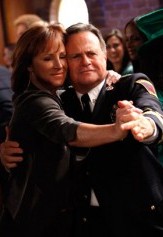 As we head into tomorrow’s final episode of One Life to Live, ABC.com has released a great video package chatting with members of the cast complete with cutting to some memorable clips for each of their characters high drama over the past decades!

Check out what Robert S. Woods and Hillary B. Smith, Michael Easton and Melissa Archer, Bree Williamson, Erika Slezak, Kristen Alderson, Kassie DePaiva, and John-Paul Lavoisier and Farah Fath had to say as they take us down memory lane and bring some tears to our eyes at the same time.

After the jump, view the video package, and then let us what you think were the greatest on-screen moments for:  Bo, Nora, John, Natalie, Jessica, Viki, Starr, Blair, Rex or Gigi?

Phyllis Diller Returns to The Bold and the Beautiful!

Thank you Michael! I am never going to get over the loss of OLTL! Heartbreaking! I am still in disbelief and the thought of going through this again in September. I wish the best for all involved with OLTL! They have been awesome! I am really going to miss them so much! They have been a part of my life since the 60’s. Reality will really set in on Monday the 16th! UNBELIEVABLE!

All of this is so sad, Today on one life to live when vicki was talking during the end of fraternity row,I cried ,erika slezak has made me cry so many times I will miss her ,all the wonderful stories ,the insane stories, the love ,the hate, the fighting ,This is not going to be easy,saying goodbye never is,the thought of never seeing this cast together in this wonderful place called landview ,Im at a loss for words,to explain how I feel.Its like your reading a good book then it comes to the end and you feel a little sad,that… Read more »

Did you know Erika Slezak herself said recently that a soap is like a good book that you never finish? It never ends & that is so true-every day is a new exciting chapter to look forward too. Haven’t we all slowed down at the end of a good book & clasped the book to our chests after the final page, feeling the emotion of it all? Why is our good book of OLTL ending tomorrow? WHY?

I can’t begin to tell you how sad I am that the show is ending I have been there from the beginning, and for it to end this way is so upsetting not only for myself, the fans, the cast, and crew members. With so many people losing their jobs this is just another example of the mighty dollar winning. I want to thank of you for the great job you have done over the years Erika Selezak you are a great actress and will be missed, and far as Michael you are one of the lucky ones to go… Read more »

I’m extremly sad as well, Mad too…….This is sooooooooo wrong. IMO the most horriffic thing ever done to Television…To destroy a program, that, Imo, happens to be the Best Soap on. I haven’t watched GH since They made every single show about Sonny.. Tony Geary was The best Actor on that Program..Love when he is on..But can’t stand the same ole Sonny, Jason Mob Garbage.. I just can’t. Same Looks, same storyline..YUK. I think Geary Should have had never been off of that show..When he left..I did too. I know he came back…and caught some of those episodes, But ALL… Read more »

I’m shocked at how very sad I am…..I’m losing family…….DAMNIT.

I know it. Me too, exactly.

Thanks Michael!!! They could do hours of those kind of moments. It’s really sad and the end is too close. OLTL will be missed!

Maybe the next time Jeanne Cooper is out ill… Erika S could fill in for her… she would be great in that role. I do not wish any illness on Ms Cooper… just think it would be interesting.

While I feel your pain of not seeing the one of a kind dearly loved Erika Slezak every day on OLTL-girl, she is only 65 years old! Jeanne Cooper is 80! Lord, Erika is WAY too young to play Katherine. But I thought Michael Learned did a great job recently replacing Jeanne temporarily. I guess the next oldest women on Y&R would be Jill, Gloria, Niki-they are late 50s to early 60s? There is not really that many women on that show of Erika’s age. Ooh-what if she replaced Stephanie on B&B??? Not wishing illness of her either-but give Erika… Read more »

Forgot to say… thank you Michael for the best soapy site! While we are sad to see our stories go… this is the best place to come and find content and share with like minded people who love the genre and it all starts with you and your love and care of the genre and your fab site! Thanks again Michael!!! This has to be one of your biggest weeks for hits!

Michael… why don’t you do your favorite OLTL moments over the 40+ years you have been watching? That would be fun for all of us. Why doesn’t ABC ask the fans their favorite moments and make a DVD of them for us to have and remember? A DVD of more of the casts favorite moments and then the fans favorites would be great. I’d pay for that! Soapnet could put out the request and compile the list and they could run those episodes on Soapnet and then make some compilations of clips.

What he has done to Millions of Viewers, thousands of Actors, writers, etc with these shows..at a great Financial Loss to Those people..Many from AMC sold their homes, relocated to L.A..Then Cancelled The show.

He has destryed the Lives of many from OLTL..
I hope KARMA GETS HIM.

Do you have an address or emails where I could send a fan letter to Erika Slezak and Jerry Ver Dorn? As they’re no longer at ABC Studios I can’t send it there. Any help you can give would be greatly appreciated, Thanks much!

I have dreaded this day and want time to stand still. I don’t know how I’e made it through the last two weeks, watching the final shows. I want to see the end but yet I don’t because if I don’t it won’t happen, which of course is ludicrous. I feel so bad for the people who will lose their jobs, and wish I could tell each one how sorry I am. I will miss the show so much, wil miss the characters who I have grown to love: Vickie, Clint, Bo, especially, but all the others too. God bless… Read more »

In one of these comments, Carol Painter said that the perpetrator of this dastardly deed is leaving ABC soon. If that is true, I hope Brian Frons is unable to ever find another job and is forced to live under a bridge and eat roadkill!

Remember on Monday, don’t even turn you TV to ABC! I know some might get curious about how bad the new show will be, but the best way to really stick it to the network is not to watch at all. Let’s show ABC, just how big of a mistake they made by canceling OLTL!!!

yes,and thats the way to do it ,no more abc ,unless its general hospital.and there is no way anyone can be curious,The commercials said it all ,dumb dumb and dumber thats how the lineup on abc will be ,the only break from that cheap programing will be general hospital,well not now ,but in feb.and thats right around the corner .one life to live will continue in port charles.very happy victor is alive ,todd is not a killer.let this all play out on general hospital.dont watch abc anymore ,only general hospital.