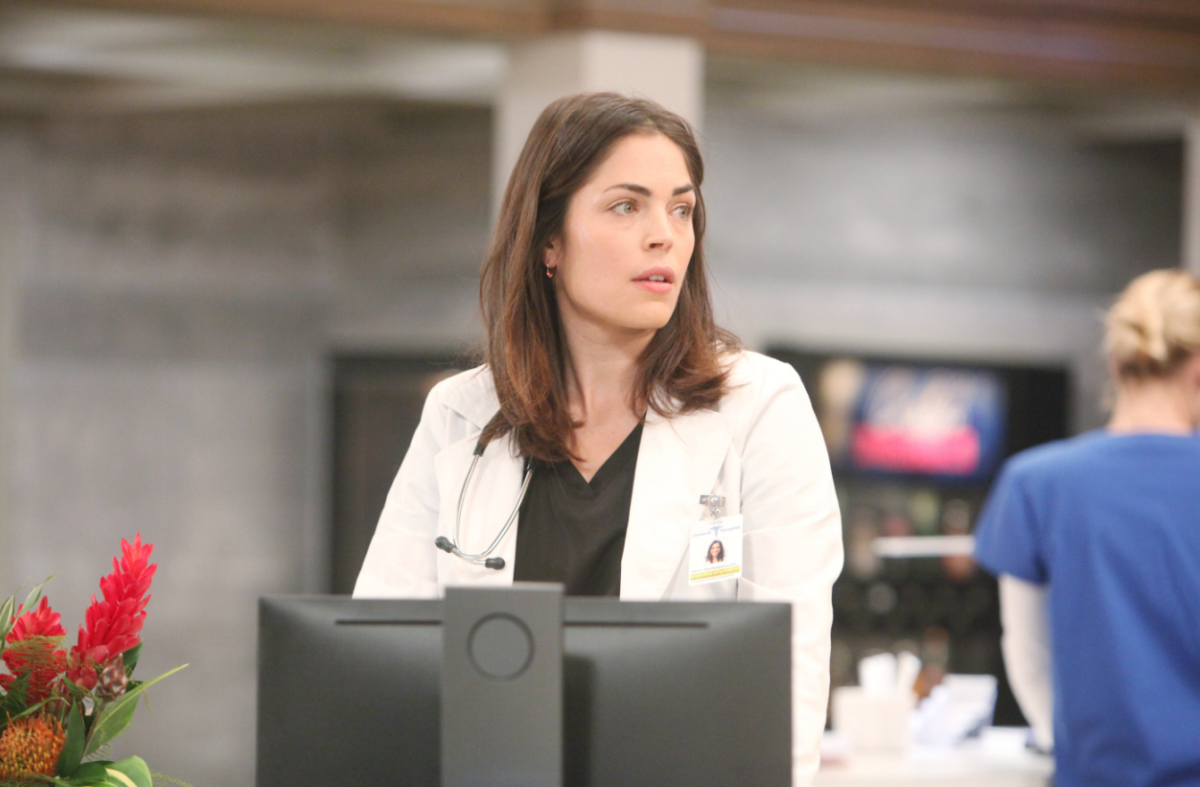 When a shocked Nurse Felix Dubois (Marc Anthony Samuel) exclaimed “Dear lord, the Britch is back,” after seeing none other than Dr. Britt Westbourne with her lab coat hovering around the nurses station at “General Hospital”, you knew things were about to go down on the ABC daytime drama series.

Over the past few weeks, Kelly Thiebaud has been in action on-screen on General Hospital as the the trouble-making, complicated, Britt.   Since returning to the canvas, viewers learned that: Britt has been paroled from her previous crimes, seems to say she believes and actually likes her half-brother, Peter August (Wes Ramsey), has confronted her mutter in jail (Liesl Obrecht played by Kathleen Gati), whom Peter framed, and showed up at Brad’s (Parry Shen) hearing to be there for her bestie, who has been in hot water for the baby switch of Wiley.

But, there have been a lot more intriguing things than even that! Britt is now hitting the sheets with none-other than Julian (William deVry), and also let him know in no uncertain terms she knows his part in the whole Brad cover-up.   But what is her true motive?  We also learned in a run-in at GH, that Neil (Joe Flanigan) and Britt know each other from somewhere.  He is trying to put his finger on just where, but does Britt know? Probably!

However, the best  and most entertaining moment on soaps last week was when Britt arrived in her lab coat to GH and revealed to both Felix and Liz (Rebecca Herbst) that she had worked hard enough to be able to get her medical license restored … and that Monica (Leslie Charleson) brought her on with a provisional acceptance as a temporary replacement for Dr. Kim Nero as an OBGYN for the hospital. Felix says give it two weeks and she will do something to mess things up. 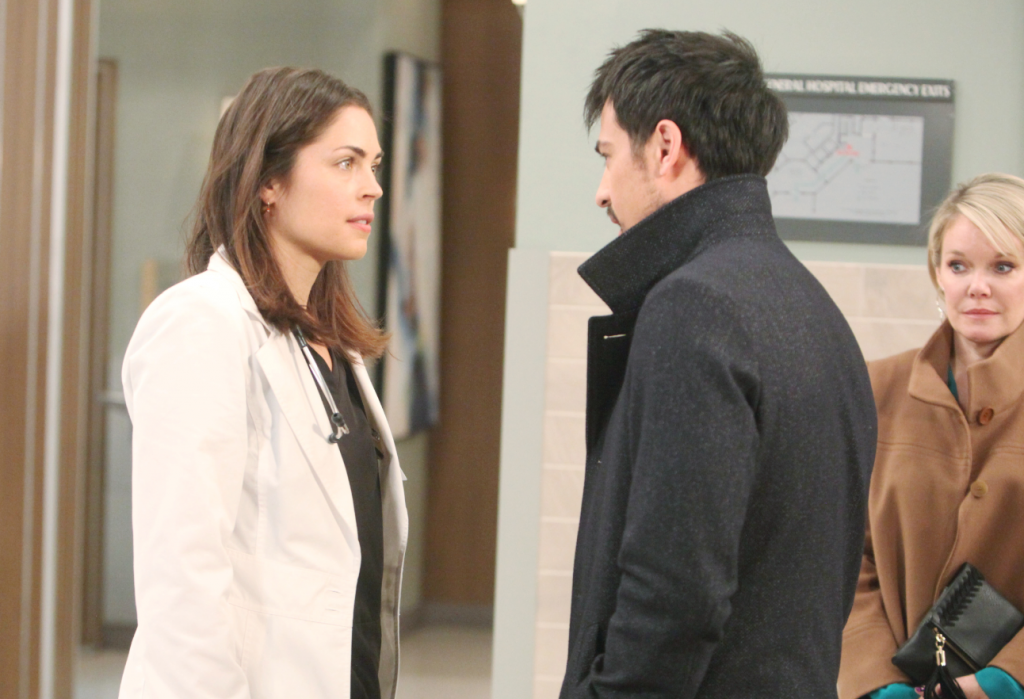 Just then, in our favorite scene of the week, Nikolas (Marcus Coloma) and Ava (Maura West) happen by, and when Britt, who is Nik’s ex, sees him she saunters over to him and slaps him hard across the face and spits out, “That’s for Spencer.”  She goes on to berate him for how he hurt his son; by letting him believe that his father was dead for three years!  Britt tells Nikolas it would serve him right if Spencer knew spoke to him again.

Next, Elizabeth chimes in and tells Britt to stop acting all high and mighty.  Britt fires back that she is not surprised that Liz, another one of Nik’s ex’s, would defend him.  Britt says, “The more things change, the more they stay the same.”

Scene after scene, Kelly Thiebaud has lit up the screen and put the “feisty” back onto the ABC soap opera.  As an actress, Kelly can go from the heavy drama, to the comedic, to the sexy, all with ease.

In the March 30th issue of Soap Opera Digest, Thiebaud said of her return:  “Frank Valentini reached out to me the beginning of the year and mentioned that the writers wanted to bring me back for a bit.  I said,’Of course, I will,  I would love nothing more than that!”‘ I just really connect with Britt and have a blast playing her.”

So let us know, have you been enjoying the return of Kelly as Dr. Britt Westbourne, thus far? What do you think Britt is up to? Comment below.

Ohh!! I like that, Jimmy. I really like Neil—-so, I hope he is given a truly ” can’t wait to watch” storyline. Will Alexis fit into this story? — I love having the Britch back—-so, whatever she brings will be compelling and flawless, I’m sure. –A couple of things, Jimmy—-since you’re the only one who seems to ride my wavelength—What say you about Caly and Brando doing the OOOO-LaLa? It’s due time—either Sonny or Carly should be cheating on each other by now And speaking of Sonny, something weird is going on with me. For the first time, Sonny moved… Read more »

I think Brando and Carly already did when they looked at each other-lol…Well, Sonny has been cheating on her forever with Jason-lol..the scene with Mike reminds me of my bedridden father who passed away 3 years ago!

I knew you would come around and warm up to Sonny like a fresh, tasty cup of Joe from Perks!

I’m liking Britt this time around better than before. I didnt like her friendship with slimy Brad. Now she is doing body shots in the backroom of Charlies Pub with Julian! Love it. Alexis who???

Love her on the show. Hope she sticks around.

I love that the “Britches” is back !! She is such a bad person to Love ! She is great ❣️

Britt has so many connections on the canvas. Great to have Kelly back. From the surprising chemistry with Julian to just the glances between her and Nikolas, KT brings it all

Can Brett please be the one to bust Nelle!

With the way the camera angles were when Alexis and Neil were in NYC, maybe she saw him and Alexis coming out of that hotel room….

Very glad the britch is back, and very glad that Felix is back. Hope they both stay

No such luck. She’s already moved to Salem.

I’m sure the character seems familiar to her already.

Not the best storyline.

I, frankly, hope she stays long term. As you said in the story above, she “lit up the screen” in scene after scene; something really needed on GH. There’s so much history that was swept out the door when they wrote off Britt. I don’t remember if she quit or not, but hope they convince her to stay. Smart, clever, pretty, talented, a great asset to the GH team. Love her! And I love the story they’ve given her, too!

Britt is back! Happy days. Now bring back her mother Liesl Obrecht to take down Nelle.

Her return did not last very long since she is now on Days of Our Lives and being the daughter of another sicko daddy, Orpheus. I really hope that she will come back to GH where she belongs.