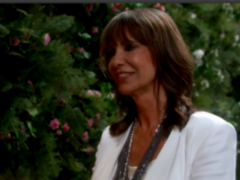 On yesterday’s special episode of The Young and the Restless, the loved ones of Katherine Chancellor gathered together to remember their dear friend and the grand dame of Genoa City at Chancellor Park.  The episode was also to honor the late Jeanne Cooper (Katherine) who passed away last year.

For the one-year remembrance episode, the writers of the series chose to have the characters of Genoa City each write a personal letter, or note, to Katherine about their inner most thoughts, struggles and current state of their lives. The letters were then put together and set a fire up to the heavens for Katherine to receive them.

Actor Michael Fairman (Murphy) made a return and began the ceremony by reading the instructions for the day from Katherine, and as he tried to read it, he was over come by grief, and handed the letter to Michael Baldwin (Christian LeBlanc) who read the rest of Mrs C.’s request out loud to the attendees.

Nikki (Melody Thomas Scott) was now drunk, Neil (Kristoff St. John) was now blind, Kevin (Greg Rikaart) was Chloe-less, Paul (Doug Davidson) and Christine (Lauralee Bell) are at odds … and we could go on.  Things have certainly changed since a year ago!  But Jill (Jess Walton) is now with Colin (Tristan Rogers), who in his letter to Katherine revealed he would do anything to protect Jill and his own family.

At the end of the episode, it was Jess Walton’s (Jill)always exquisite performance who had the final words, as it should be, with Katherine in a private moment.  After trying to figure out what the “Music Box Mystery” that Katherine sent her on a year ago truly meant, she thinks after a conversation with Colin that it was Katherine’s way of having Jill not end up from where she always started (which was basically alone and miserable), but she ended up finding love with Colin.

Jill tells Katherine “Thank you” for the gift she gave her, and teaching her that its about the journey, and helping her find love.  She then says she won’t be needing the “music box”, and leaves it behind and says her final goodbye, for now, to her long time friend and often time nemesis, and exits the park.

As she leaves, someone swipes the music box! So it looks like, as Jess previewed in her interview with On-Air On-Soaps this week, that part of the story is far from over!  So, what did you think of yesterday’s episode honoring Katherine Chancellor and Jeanne Cooper? Jill’s final emotional line of the episode to Katherine was: “I hope whatever journey you’re on right now … you are having the time of your life.”  A beautiful sentiment for Jeanne Cooper, indeed.

Watch the final moments of the episode below … and then share your thoughts on yesterday’s airshow!

It was a good episode…and of all actors not on the show, its Jeanne Cooper i miss the most…i dont often watch but when i do i still can tell the show hasnt been the same without Jeanne/Katherine!!!

I agree, Katherine was THE staple of Y&R, I’ve missed her presence so much. And Jeanne Cooper was amazing, my grandmother watched from the beginning and loved her all the way through. She was truly a gifted actress. And her chemistry with Jess Walton was unbelievable. Katherine and Jill were my favourite pair on this show!

I thought it was a beautiful episode!

Me too. Very moving.

I felt nothing, considering the fact that I cry over everything and anything…I get very weepy when moved, but not this time. “Hillufer ” was so out of place; I mean, she knew Katherine for what? A minute?

Was there a wedding in this episode?

I loved seeing nina who they need to bring back permanently

It was really lovely. The snippets of the letters were amazing. The writers should be very proud.

I thought it was nice, a huge improvement over Katherine’s memorial last year. Jess Walton was perfection ( of course), and Tristan Rogers was excellent as support. It was nice to see Nina again, I wish she could stay. I missed Brock. I wish he could have returned to say a few words. Just the sight of him tears at my heartstrings. He embodies the love and the goodness in Katherine like no other character can. A few flashbacks would have been nice. Not of the Grand Dame version Kay. She was kinda boring. I LOVED Katherine in her prime.… Read more »

It was an episode saluting the actress JC not the character of Katherine. Very sad that they did not do justice to the character with long time story.

Better than last year’s episodes but really that didn’t take much (but I kept wondering where Brock and Phillip were at). I thought the writing of the letters was pretty pointless if at least one didn’t wind up in the wrong hands to reveal a secret. 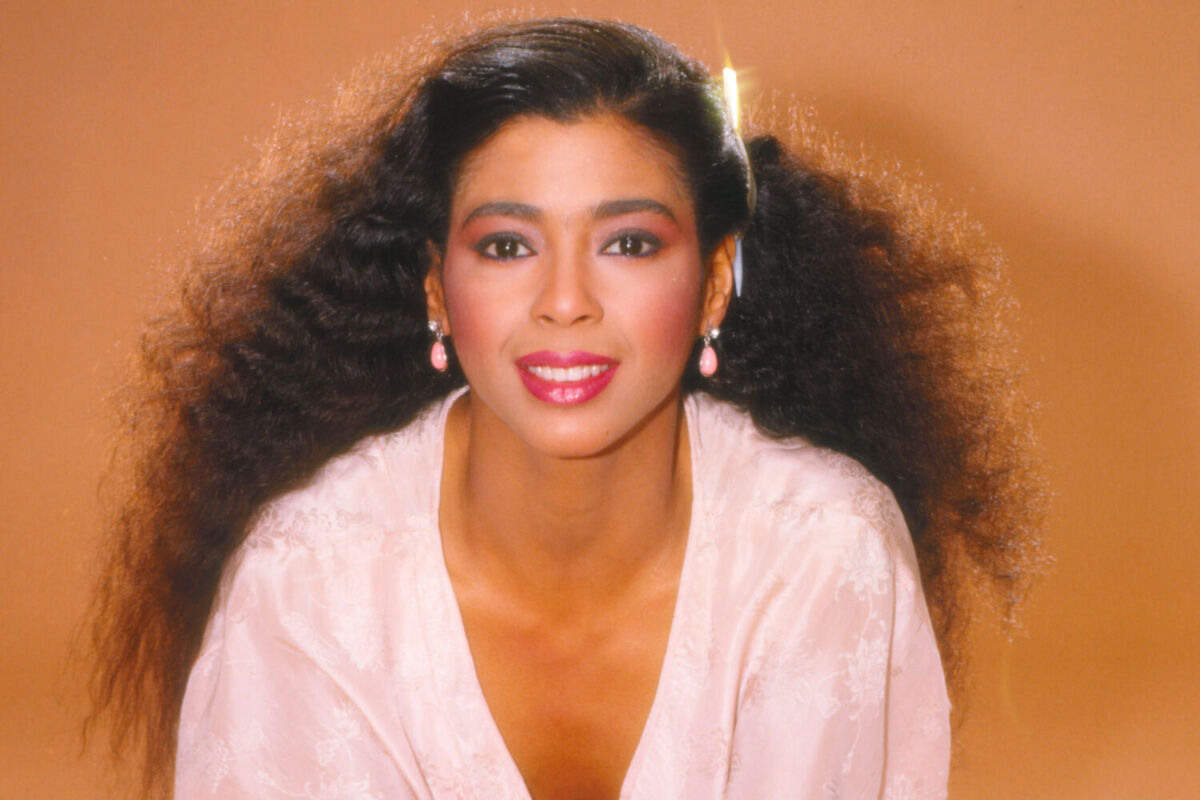 Oscar and Grammy winner, Irene Cara has passed away.  The singer/songwriter/actress, known for her memorable vocal performances to the theme of the hit movie, Fame, and singing the title track to another 80’s blockbuster, Flashdance, apparently died in her Florida home yesterday. The cause of death is not yet known.

According to her publicist, Judith Moore on Twitter, the rep shared: “This is the absolute worst part of being a publicist. I can’t believe I’ve had to write this, let alone release the news.  It is with profound sadness that on behalf of her family I announce the passing of Irene Cara. The Academy Award-winning actress, singer, songwriter and producer passed away in her Florida home.  Irene’s family has requested privacy as they process their grief. She was a beautifully gifted soul whose legacy will live forever through her music and films.”

A little known fact is that Irene’s first acting gig was on the daytime drama, Love of Life from 1970-1971 in the role of Daisy Allen.   She later appeared in TV roles on: What’s Happening, Kojak, Roots: The Next Generations, and in the film, Sparkle and many more.

Later, Cara first rose to prominence when she was cast in the 1980’s musical film Fame, where she sang the title track and starred in as Coco Hernandez.  Her vocal performance in Fame earned her two Grammy Award nominations for Best New Artist and Best Pop Vocal Performance Female in 1981.

Two years later, Cara not only picked up two Grammy Awards for her performance, but also an Oscar for  co-writing, “Flashdance… What a Feeling” from another 80’s pop culture smash, Flashdance.  At the Grammys in 1984, Irene won for Best Pop Vocal Performance, Female, and Best Album of an Original Score Written for a Motion Picture or a Television Special.  She took home the Oscar for Best Original Song at the Academy Awards in 1983.

Cara’s rep added, that at the time of Irene’s death they were working on new projects: “Working on amazing projects that would have made her  and her fans incredibly happy. Her manager and I will finish them. She’d want that.”

This is the absolute worst part of being a publicist. I can’t believe I’ve had to write this, let alone release the news. Please share your thoughts and memories of Irene. I’ll be reading each and every one of them and know she’ll be smiling from Heaven. She adored her fans. – JM pic.twitter.com/TsC5BwZ3fh 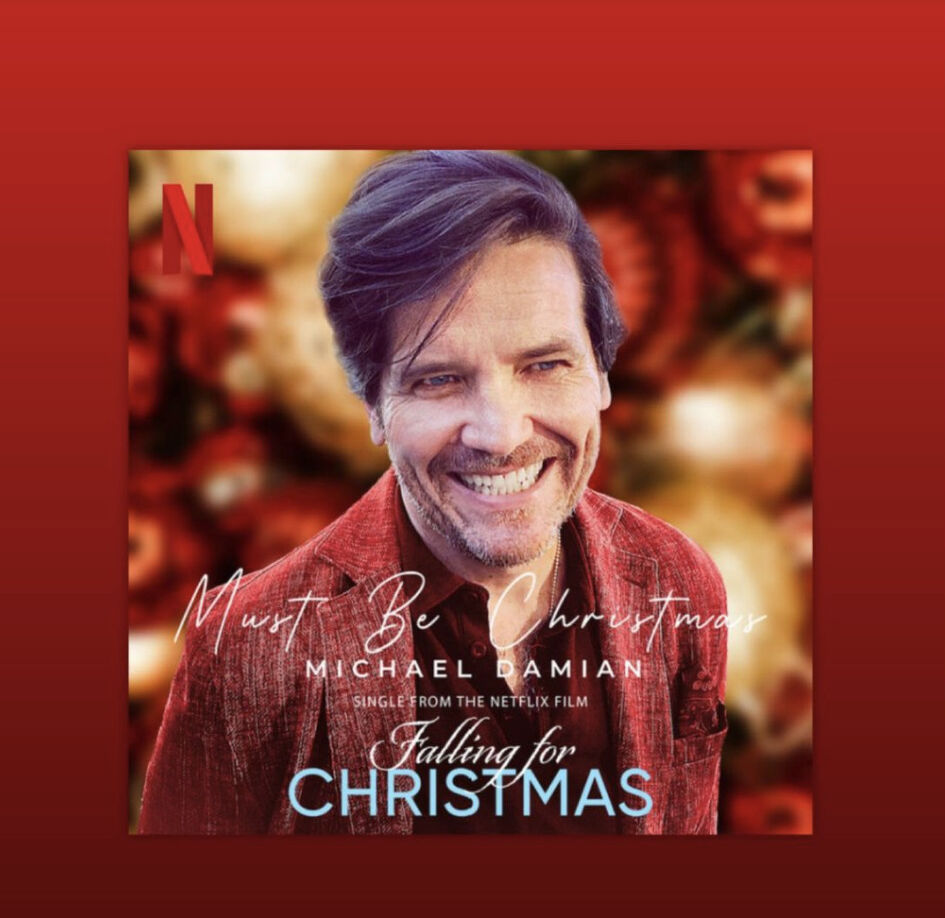 Michael Damian, who is reprising his role as Danny Romalotti on upcoming episodes of The Young and the Restless, has also been very busy producing films including Netflix’s new holiday hit, Falling For Christmas.

Falling for Christmas stars Lindsay Lohan and Chord Overstreet, and was directed by Michael’s wife, Janeen Damian.  In the film, Lohan plays a newly engaged and spoiled heiress who finds herself living away from the luxury she’s used to after an accident at a destination proposal gone wrong leaves her suffering from amnesia. 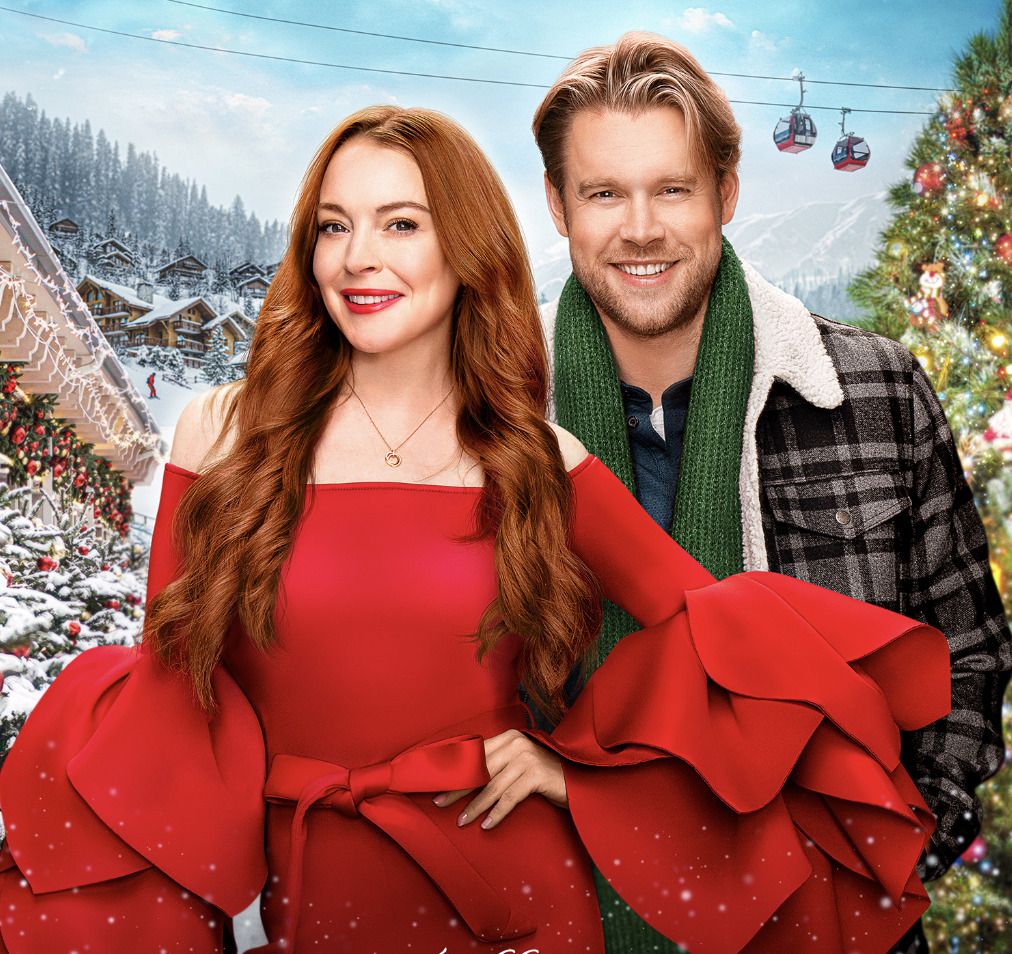 On Black Friday, Damian revealed that his new single from the soundtrack of the film is out and dropped on Spotify and all music streaming platforms.

The track is titled, Must Be Christmas, and for all of Michael’s fans from his singing days as rock star, Danny Romalotti, you will enjoy getting to hear him sing all these years later. 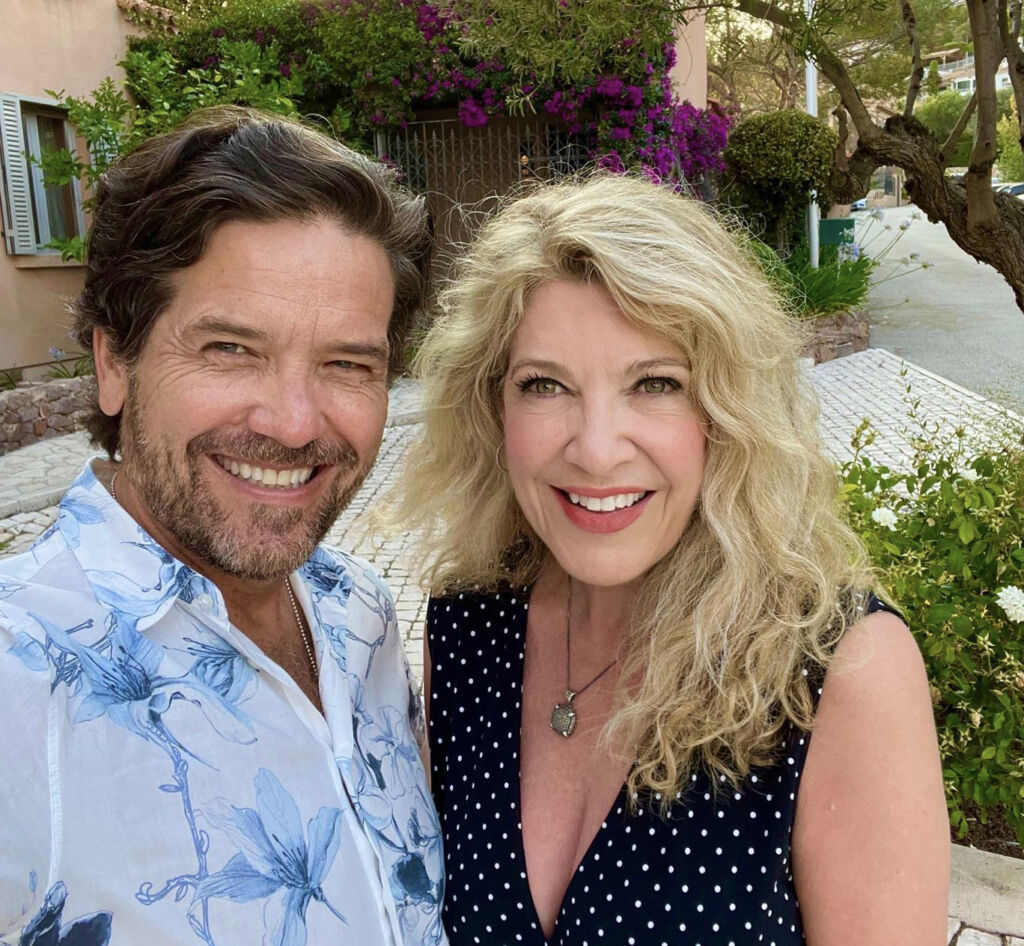 So, will you be adding Michael’s ‘Must Be Christmas’ to your holiday playlist? Let us know in the comment section below. 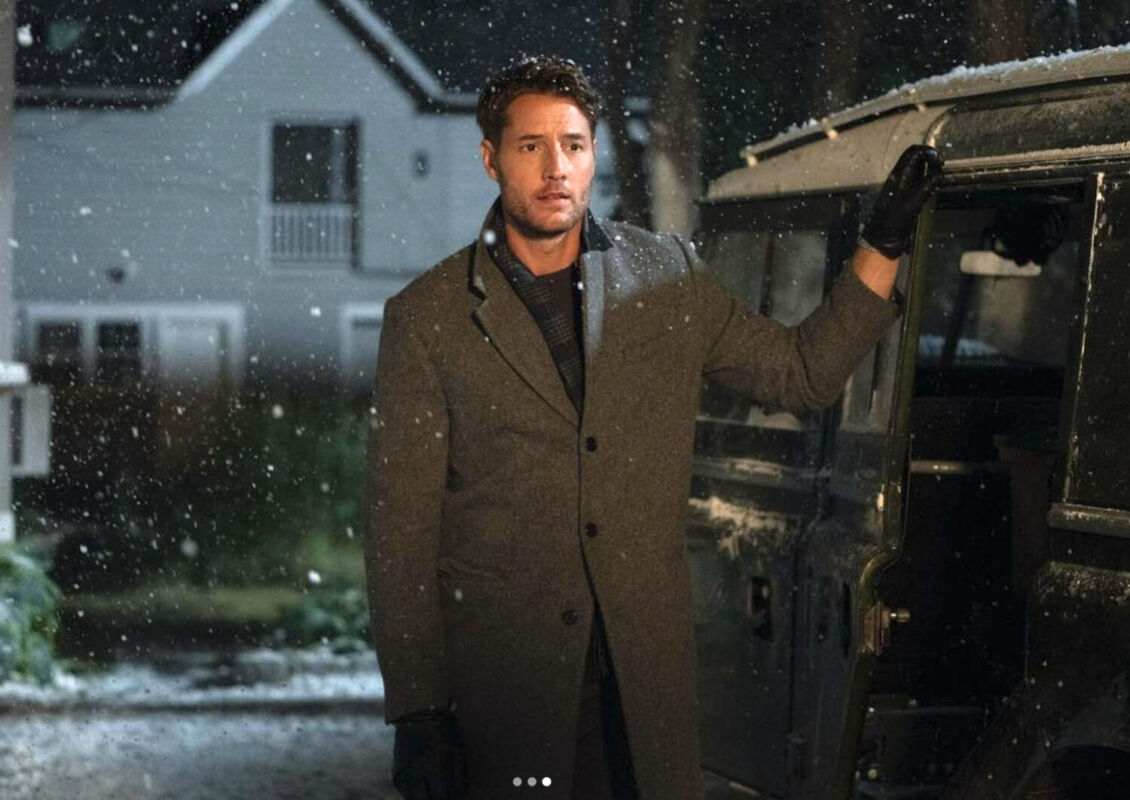 Look for former Y&R and This Is Us star, Justin Hartley (ex-Adam, ex-Kevin) in a holiday film bowing tomorrow, November 24th on Thanksgiving Day.

In Netflix’s The Noel Diary, Hartley takes on the role of Jacob Turner, a successful novelist who gets a shocking phone call from his estranged mother’s lawyer. He informs Jacob that his mother has died.

Now, returning home to settle his mother’s estate, ‘Jake’ meets a young woman named Rachel (Station 19’s, Barrett Doss).  We find out she is searching for information on her birth mother, who she believes worked as the Turner family’s nanny many years ago.  As Jake and Rachel set out together to confront their pasts, an old diary may hold the key to unlocking their connection, while opening up their hearts to an unexpected future.

Hartley posted some pics from the film on his Instagram adding, “Sending out a few images from my upcoming film, #TheNoelDiary! Coming to @Netflix on November 24th.”

Then let us know if ‘The Noel Diary’ may be on your watch list for Turkey Day via the comment section.