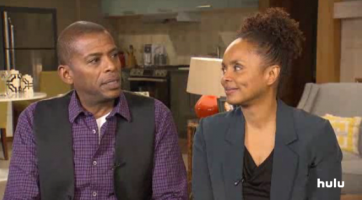 Before you head to bed tonight, or stay up with anticipation and excitement that in only a few more hours brand new episodes of All My Children and One Life to Live will be posted for the first time in their new home – Hulu.com, NBC Today’s Mara Schiavocampo’s report looks at the behind-the-scenes returns of the shows including clips of the production in action in Connecticut in this Xfinity video!

As well, the segment look at the ABC finale cliffhanger of All My Children, where someone is shot after JR fires a bullet from his gun! But just who is it? Will it be revealed in short order on all-new episodes?

And while the NBC report also reminds us that Susan Lucci, the most heralded name in AMC history as Erica Kane, is not back at the moment as part of the reboot, One Life to Live’s major star, Erika Slezak (Viki) is … and so is Viki’s on-screen feud with Dorian played by Robin Strasser.  (would be nice if the voice-over announce on this piece would pronounce “Slezak” and “Strasser” properly, but that’s a whole other story!)

All My Children legacy stars, Darnell Williams and Debbi Morgan (Jessie and Angie Hubbard) are interviewed for this video package celebrating the returns of the series by letting everyone know how excited the fans truly are:  “They are counting down! We have our own countdown for the show, and they are counting down too!” Darnell added, “It just makes us feel like it’s going to be POW!”

Although this report also called AMC and OLTL “web series”, it has been made very clear by Jeff Kwatinetz and Rich Frank of Prospect Park, that they do not view these two soaps as “web series” but fully realized television style productions. This video also talks about shows moving into the digital age and keeping up with the time,  and series with dedicated fan bases like soap operas! Watch the video report below, and let us know what you thought of it?

Michael Easton Wishes "Success & Happiness" To the New One Life to Live!

N.Y. Times Report: Prospect Park Own The Rights To General Hospital If ABC Cancels It!

Just finished watching both shows and it’s great they are back. It’s fun to see all the familiar faces. This is huge for the future of television. Love all the references to new technology. Both shows have a different vibe than the ABC versions. They both had a few words not allowed on broadcast TV. The OLTL club scenes were a bit too much. Already both shows have had more location shots than ABC did in a whole year. AMC has great credits and theme song. Love the ‘on the next episode.” ABC used to do that until they needed… Read more »

I watched both soaps..
I m more than thrilled!!
The new and improved soaps are more than words of how awesome they were/are!!

((when the shows ends there is ”rate” above the video ..

Just saw episode 1 of oltl – holy cow! They knocked it out of the park! The ending was truly a shocker! No spoiler here!

I just watched OLTL, mixed feelings, not sure it was that great. Maybe they were just getting people acquainted with the characters but loved the appearance at the end of the show.

Just finished watching both AMC and OLTL.
Loved them, picked up where stories left off, and a few surprises.

Great to see Vicki and Dorian and David and Bo and Clint and Nora and Blair and Tea and even Matthew and Destiny.

I did forget one mysteriious character in a hoody.

Watched the both shows this morning:) Really excited they are back !! Love AMC AND OLTL

I just watched both shows and wow! In terms of which one will last, One Life To Live unless the writers at AMC change their tune. I don’t want to give anything away, but AMC felt jumbled and disconnected. OLTL had perfect flow with the writing and the story they set up and picked up with from the end last year. The last scene on OLTL will have you jumping for joy at the future of the show!

I love how they are now ”snap snap snap” moving fast!!!

That looooong old-fashioned drawn out story telling bores me ..

So great to see the soapy back. YAY!!