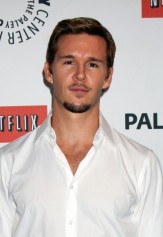 Tonight, HBO’s vamp series, True Blood concludes its 12-episode fifth season!  Recently, TV Guide had ran a piece that in the final two episodes, the vampire war will reach a fever pitch in which no one, even your favorite characters, are safe!

In tonight’s season finale entitled “Save Yourself, ” here is what we know:  Eric embarks on a final, desperate mission to overthrow the Authority – and save Bill from losing his humanity.  Andy faces the consequences of a light pact he made; Alcide readies for a second showdown with J.D. (Louis Herthum); Sam and Luna test their limits in trying to escape the Authority.

In a recent TVG interview with series star, Ryan Kwanten (Jason Stackhouse), who is also key to the finale,  the popular young actor gave this hint about his alter-ego’s fate: “Well, Jason has a very big role.  Like I said before, it’s his family he’s fighting for. It’s the town. It’s for the answers to his parents dying. It’s pretty much do or die for Jason. This finale actually takes us all the way up to a huge cliff-hanger in [the final episode] where you’re not quite sure who’s going to live and who’s going to die. In previous seasons, we had the so-called cliff-hanger in either Episode 10 or 11 and then, Episode 12 is answering that cliff-hanger and then setting up the new season, whereas this one very much leaves us on a big “Oh, my God,” moment.”

Now after the jump, watch a preview of tonight’s episode and then let us know what you would like to see happen? Or, what you think may go down as the action unfolds, Sunday night, August 26 at 9 p.m. ET/PT only on HBO!

Y&R's New EP Jill Farren Phelps To Cast: "I Come In Peace! Not To Rape And Pillage Y&R!"