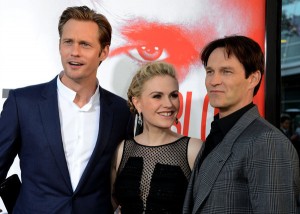 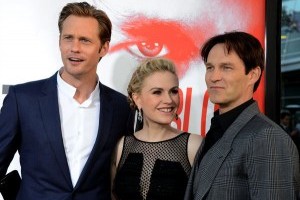 Tonight get ready for blood, sex, drama, and some laughs, and one hell of a good soapy vampire show, when True Blood returns for its kick-off to its fifth season.

A bit of where we left off … at the conclusion of season four of True Blood, Sookie summoned all her resources for a climactic encounter with Marnie, and emerged triumphant. But her showdown with Debbie may have had fatal consequences for Tara. Meanwhile, the denizens of Bon Temps were approaching a new crisis with Russell Edgington, their familiar friend, while new threats from unexpected sources loomed. The Emmy-nominated True Blood is back for a12-episode fifth season  starting tonight, Sunday, June 10 (9:00-10:00 p.m. ET/PT) on HBO.

In the first episode of the new season entitled, “Turn! Turn! Turn!” Sookie and Lafayette clean up the Tara and Debbie Pelt mess; Bill and Eric are visited by the Vampire Authority; Sam and Alcide deal with an angry werewolf pack.  The series follows waitress and part-faerie Sookie Stackhouse (Anna Paquin), who can hear people’s thoughts, vampire Bill Compton (Stephen Moyer) and vampire Eric Northman (Alexander Skarsgard). Alan Ball (creator of the Emmy(R)-winning HBO series “Six Feet Under”) created and executive produces the show, which is based on the bestselling Sookie Stackhouse novels by Charlaine Harris.

Now after the jump watch a preview from tonight’s new episode!

I hope somehow they can have marnie as a ghost from time to time she was my all time favorite!

True Blood is putting nails into its coffin. This show is really resting on its laurels. Most of the fans are horribly dissappointed, and I for one am not sure I will be tuning in, in June ’13.

Now that Alan Ball is gone, it may be different… And I can only pray. This is not show I fell in love with, way back when.