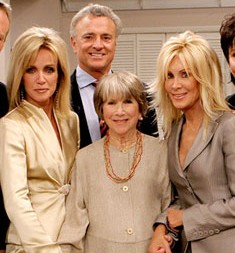 Last night word broke that the five-time Tony Award winning legendary actress, who also appeared on Knots Landing, Julie Harris passed away at age 87.   Harris is one of the most revered performers of all-time.

All My Children’s Francesca James (Evelyn), a long-time friend of Julie Harris’ offered some information and comments to the press on her passing, relating, “Harris died at her West Chatham, Mass., home of congestive heart failure.”   Harris had suffered a stroke in 2001 while she was in Chicago appearing in a production of Claudia Allen’s Fossils.

” She suffered another stroke in 2010,”  James said.  As for Julie’s death yesterday, Francesca sadly added,  “I’m still in sort of a place of shock.  “She was, really, the greatest influence in my life.”

Soap opera fans knew of Julie Harris work from her role as Lilimae Clements, the mother of Valene Ewing played by Joan Van Ark on CBS’ Knots Landing.   Fans loved the trouble Lilimae would find herself in, due to the characters  free-spirit and trying to protect those she loved, often times making horrible decisions.

But for Harris, her career on the Broadway stage no knows peer.  She was awarded the stage’s highest honor for her performances in I Am A Camera,  The Lark, Forty Carats,  The Last Of Mrs. Lincoln, and The Belle of Amherst.   She won a  sixth Tony for a lifetime achievement award in 2002.   Harris also won two Primetime Emmys during the course of her career. And, was awarded a Kennedy Center Honor in 2005!

Now after the jump, watch Lilimae Clements arrival on the cul de sac on Knots Landing in a scene with Michele Lee (Karen).   Then, let us know your thoughts on the passing of Julie Harris, and if you have some favorite moments with Julie as Lilimae!

I have to say that Knots Landing was one of my favorite shows.

God I loved Knots Landing How about a remake.

God, it was I who “loved” knots landing…

LOL. what a gem… a rare treat… what TV was about. Knot’s hit all the right buttons.

no other show… past or present… ever lived up to

A crime they only released two seasons on DVD.

this is the one tv series… i’d buy.

Great actress excellent cast and truly one of my favorite nighttime soaps. NL should have gotten more for being such an excellent show with the best cast.

Another legend passes…sad! A lot of actors coulve shouldve took acting lessons from her!

I saw her in a touring production of the Belle of Amherst. She was so wonderful that my Mother and I cried at her performance. It remains one of the two highlights of my theater going life. The other one was seeing James Earl Jones and Vanessa Redgrave in the Broadway production of Driving Miss Daisy.

Julie Harris was also a movie star too, appearing the classic films “East Of Eden”, “Requiem for a Heavyweight”, and “The Haunting” back in the 50’s and 60’s!

Will always remember her performance in “The Haunting”, she was so fragile playing Nell. Not to mention East of Eden as “Abra” her need to save Cal from himself was palpable. Would that she was recognized for her work on the silver screen. Rest in peace Julie, your work will live on for all to enjoy.

I totally agree. I don’t understand why they’ve only released Seasons 1 and 2. I’m waiting for the other 12.

Julie Harris’. yes, I mainly, know her from the Treasure she was on the superior Knot’s Landing. she is the most celebrated broadway “winner” 5 times Tony award winner…. acknowledged with a 6th lifetime achievement Tony award. and.. w/2 emmy wins…. and a grammy award win… no less. was oscar nominated. awards aside…. this lady… fully embodied her character’s, did she not? another superlative… “Incandescent”. She, like no other… did all the genres in the art world… and made it her own. had to bio how long she was on knot’s…. from 1980-1987. LOL… what a treat… what a treasure…… Read more »

She may done a lot of other work professionally during her life, but she will always be Lillemae. May she rest in peace. My condolences to her family and fellow Knots Landing cast members.

There has never been an Actress better than Julie Harris.

Francesca James still looks fantastic!!!! Know she has been involved in behind-the-scene soap stuff for ages, but would love to see her in front of the camera again!!!!

Geez what a class actress she was! Did great work in movies (Reflections in a Golden Eye was on TCM a few days ago, she was so good in an otherwise uneven movie), The Haunting, East of Eden….Knots of course she was great and all this magnificent stage work. I shall miss Julie Harris very much!

Julie Harris was a grande dame of the stage. Although I will always remember her most in the classic film, Member of the Wedding.

She was a gifted actress and gave us so many wonderful performances.. It was amazing she took the role of Lillimae on Knots Landing. So many marvelous stories told on that classic primetime soap. One of my fav stories was with a young Alec Baldwin as her troubled son.

Julie Harris was amazing. This is a sad time, but fortunately some of those acclaimed performances are captured on screen. I will say I was surprusied when she joined KNOTS LANDING but why not? She had a great character to play and her presence was perfect among the other very storng actors in the company through the 14 seasons. Miss Harris is one reason that primetime series is one of the best ever. And what struck me about Miss Harris was how humble she demiure she was in the press. How fortunate Francesca James is to be her dear friend,… Read more »

I will never forget her in the Chip and Joshua Rush storylines. She was excellent!

Sorry to hear about this. What a great actress!