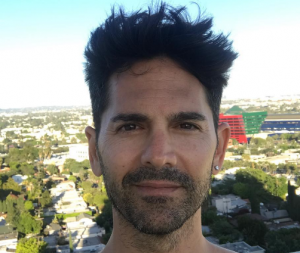 That is when, according to TV Line, who has posted “First Look” photos of Michael Sutton’s return to GH, Sonny (Maurice Benard) will see the late Stone Cates as he continues to be in dire consequences after being pushed into a hole by Sam (Kelly Monaco) on the docks!

Sutton, who was the focal point of one of the soaps most memorable storylines and important social issues topics of our time was killed-off GH when Stone died tragically died in late 1995 ofAIDS.

In story, Sonny and Stone had an incredible bond that played out on-screen. Stone’s relationship with Sonny was definitely ‘brotherly love”.   Sutton last reprised the role back in 2010 on GH, when his former on-screen lady love, Kimberly McCullough (Robin) also found herself in dire straits and Stone came to her in her time of need to help her get through being stuck down well!

So, get the hankies ready as Sutton and Benard are sure to have us in tears on Tuesday’s episode of GH.

Excited to see how the scenes play out? Comment below.

I adore Sutton and Stone but I’m not looking forward to this at all. Sonny is way overexposed & infecting too many stories. Add to that GH continues to exalt this thug who’s never paid for anything, blames everyone else and hasn’t changed/evolved in 20 years. I have no doubt Stone’s dialogue will be a variant of more ‘you’re the best’ , ‘it’s not your fault’, and ‘ everyone would be destroyed without you’. GH needs to reboot itself away from the mob and the criminals as heroes and balance the show. GH needs to fix it before there’s nothing… Read more »

With his litany to his children, Sonny could have mention Lila McCall, his stillborn daughter with Sam (yes, newer viewers, they were actually a couple when she first came on the show). His first wife, Lilly was pregnant when the “click-boom” car explosion occurred.

The GH ghost is back..
He’ll be on screen a total of 20 minutes then gone.

He was before my time so not excited, but! I like ghosts ..
What would be much better and way more exciting would be if the dead ones came back as the Walking Dead.. that would be good..

Yes, and have Sonny fall in love with one of them, su….I like ghosts, too….the friendly ones.
I dreamt of my beautiful cousin ( passed away three years ago) the other night. His was the only visible face….clear as a sunny day, but everyone else around him was faceless.
My Gran said that those were evil spirits ( no face).
Gotta stay away from certain people, I guess? LOL. A warning!!

Hi Celia!
I love the unknown world.. would love to explore it while alive haa!
But- this Stone guy ghost is belittling to all real ghosts!
Just shame on Shelley & Frank for their aged ghost, just shame!!

and GH could use some of those ‘faceless spirits” to liven GH up, give us an exciting creepy adventure!

I’m with you, su….I love ghost stories!!!! I could tell you a few…real ones.
I grew up listening to Norse, Scottish, and Dutch folklore. I still believe!!!!!! There are ghosts among us….call me delusional, LOL, but I see signs—these good spirits do not, necessarily, materialize, but I know they are there.
So, I’ ll take your “exciting creepy adventure”, if GH offers us one….but, not what we just witnessed with Sonny and Stone….too tame and lame.
I know you adore Sonny, SuzieQ; but, to me? He’s a kill-joy. Pardon the pun!! LOL.

But, Su, I wish for you the experience that you missed! Truly one of the best story lines of classic GH–well conceived, well written, flawlessly executed. Oh, I how I pine for the good ol’ days at GH.

Geez, no point of me dieing since ghosts age anyway-lol

Im so happy about this. If Carlos can have 500 twin brothers, why can’t Stone have a just one ? Please? This could actually make me hope for a Robin return.

How does this make we we? He died as a teen, which is how he’s remembered.

Man, this show is struggling right now. I hope the good ship gets righted shortly

Had to be Stone he saw today. Is it Tuesday yet??? THANK you #GH just who my SONNY needed.

Looking forward to this episode. I sure hope Sonny down in the hope “Sonny down the hole” does not go on too long. And isn’t it a little too close to Robin down the well????

Why couldn’t he have been a twin, doppelganger, or just a new character. Dr. Joe brother. Something new.

Hey Patrick…I think because Michael Sutton doesn’t want to return to acting full time. Seems he’s happy with these sporadic, “save the moment” visits” to his loved ones!

He looks so different. I just don’t understand how it’s going to work. A person who dies doesn’t age.

I know, ghosts don’t age!
damn them for writing that ghosts age and ruin the whole concept of a real ghost..
No one, no one should recreate ghostdom, ever.. Casper should sue Shelley & Frank !

No worries, I just put a curse on Shelley..eh ehh !

And—
Stone died; 1995 at age 19 and the ghost aged 23 years, 2 decades,
lol that is more than stupid it’s even too stupid for Shelley and frank.
they outdid themselves on stupid! ahaaa!

My neighbor had the entire soap on CD via Amazon, and gave me a disc at a time took me 2 years or more to watch it and I LOVED it !!
It was campy perfection ! absolute perfection !
Never ever a FF moment , and that is amazing!

su0000, I can’t believe its been that long! WOW! It seriously seems like yesterday, that I was watching Stone’s battle with AIDS play out on General Hospital. The storyline was written with such heart, integrity, and sensitivity.

Ahhh, su….We both said it, many moons ago that ghosts do not age….and, yes, the image is now ruined. Yet, I still ask: why? What was the purpose of this insipid scene, if not to put another notch in Sonny’s ” I’m a good, hallowed guy, deep down”? That’s all it was…boost Sonny’s ‘impeccably golden’ image. Take him to the stars….actually take him where the sun “don’t” shine: underground!! Maybe he will lapse into a coma and see God….Sonny will sit by His right hand, as God extols the praises of Sonny’s earthly goodness. He will consecrate Sonny’s soul? Well,… Read more »

Didn’t look like he had age a bit to me! The only thing different was the clipped hair; stone had those lucious long locks. 🙂

Would be nice to have Sutton back for good, a much more welcome return than Steve Burton.

Despite aging in heaven, Stone (Sutton) looked quite well.

Sonny made the comment about being reunited with Morgan. The writers were careful to allow leeway for Morgan to return down the road. However, if Morgan is dead, Sonny probably wouldn’t be reunited as he’s probably taking the “down elevator” if you know what I mean.

That’s what I said; in other words, on the other site, Steve. Hope to see that “descent”, one day…..

WOW, do I remember rushing home from high school (walking home from the bus stop) to watch General Hospital my Freshman year, in 94-95, just dying in anticipation to see if Sonny and Brenda would be on that day. I loved Sonny, Brenda, Stone, Ned, Lois, and all of the Q’s. The writing and the storylines were based on real human emotions and struggles. Michael Sutton just brought you to tears during Stone’s battle with AIDS and his love for Robin. Brings back such memories, of what used to be a beloved show, IMO.

So beautifully stated; I agree with all of your sentiments.

Michael Sutton is still such a natural. Even in this short visit, his acting was impeccable! He just radiates emotion. Still, the Stone of yesterday will forever be that beautiful boy you just couldn’t help but fall in love with and mourn.