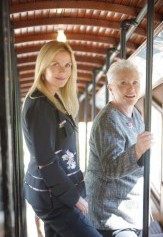 The Bold and the Beautiful’s head honcho Brad Bell, and the series long-time female stars, Susan Flannery (Stephanie) and Katherine Kelly Lang (Brooke) have been named Soap Opera’s Entertainers of the Year by Nelson Branco at TV Guide Canada. From the spellbinding and tantalizing stories of Brooke and Oliver’s party boink during the summer, to Thomas and Brooke’s current “taboo” situation, to Stephanie’s battle with stage four lung cancer, to the dove-tailing into the beautiful homeless plight of the people of Los Angeles,  and Stephanie and Brooke’s relationship coming full circle, the series has truly been at the head of the class for 2010.

In a rare interview conducted jointly, Bell, Flannery and Lang banter back and forth on all the subjects that made this year both bold and beautiful.  Here is just one excerpt of the repartee of the trio below when discussing the burgeoning friendship/flirtation between young Thomas (Adam Gregory) and our Brooke!

Brad Bell: It feels different because everyone is aware of what they are doing [in this new equation]. So much of this story is about Brooke’s character. Taylor is scared to death that Brooke is going to cross the line again with her son; and Ridge has laid down the law that an affair cannot happen between his wife and son. But we know with the history of the show that the incredible always happens and we wonder if it’s going to happen here again. So much of this story is delving into Brooke’s character. Yes, we’re flirting with disaster.

Brad Bell: Brooke is walking the tightrope again, which is always fun.

Susan Flannery: It’s the best way to tell a story; the audience is sitting there hoping it will happen but also hoping it won’t happen because then they’ll have to deal with the aftermath emotionally. I think that’s great storytelling: you don’t know if something is going to come to fruition as far as this relationship between the two of them. Personally, I think it’s very tantalizing and very real! The young prince wants to throw the father off the throne, in a sense. Whether it’s subconscious or not, I think it’s a great story.

So do you agree with B&B’s Bell, Flannery and Lang as choice for Entertainers of the Year? Let us know!

ABC Daytime to run encore episodes for the Christmas holiday – Check the Schedule!

If B&B’s the best, what’s the worst? To finally win a Daytime Emmy, Brad Bell had to kill off Stephen “Storm” Logan Junior. Then he had to kill off Ann Douglas, portrayed by Betty White to get his next Daytime Emmys. Now he hinted at potentially killing off Stephanie for his next bid at the Daytime Emmys. Talk abt the same old crap. The Party Boink was a campy storyline. Steph’s double slap was great. But ultimately the Party Boink was stupid since they made Brooke think 20 something Oliver was Ridge. She should have been drunk instead of hormonal.… Read more »

I watch B&B once in awhile since my ATWT went off the air.The homeless storyline is getting good ,but I hardly think they should win this award.ATWT at its worst had some memorable storylines and at its best it was womderful.While I think Susan Flannery and Katherine Kelly Lang are good actresses.i think ATWT was better.just the story of luke and reid was wonderful to name one and Van Hansis and Eric Sheffer Stevens gave memorable performances! B&B has some good actors,Lang, Flannery, Conroy, and i like Don Diamont…he plays devious so well, but I do think they have too… Read more »