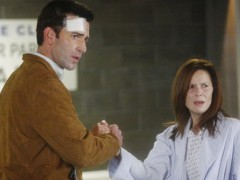 The following encore episodes of All My Children, General Hospital and One Life to Live will be broadcast on the full ABC network on Thursday December 23 and Friday December 24, 2010.  Here is the line-up in case you want to tune-in and relive some memorable moments of three major storylines from each of the soaps.  From AMC, Greenlee’s trial in the David Hayward murder and the shocking twist.  From OLTL, Eli setting off the bomb in the warehouse, Tea and Todd reunite and Cole shoots Eli. And from GH, a blast from the past with two pivotal episodes from the Metro Court saga from 2007.   Here is the line-up below!

All My Children #10504 (original air date 11/22/10)–This episode features the culmination of Greenlee’s trial.  Just when Greenlee is found guilty of David’s murder David walks into the courtroom alive.

One Life To Live #10796 (original air date 10/22/10)–Todd, John and Bo confront Eli at the warehouse where he’s holding Dani and Tea.  Blair sneaks in and is overjoyed to discover that Tea is alive.  James, Ford and Langston plot to rescue Starr.  Destiny learns that her parents are her real parents and her brother is her father.  The warehouse explodes at the end of the episode.

General Hospital #11227 (original air date 2/1/07)–This episode is the first episode of the Metro Court saga and the takes place twelve hours before the Metro Court explosion.  Craig’s mercenaries storm the Metro Court that is filled with people attending the Ball.  After reuniting with Luke, Lulu accuses Alan of killing Rick and framing Laura.

Then on Friday December 24 (Christmas Eve):

All My Children #10505 (original air date 11/23/10)–Pine Valley reels from the news that David is alive and how he pulled it off.  Greenlee is free to be with Ryan.

One Life To Live #10797 (original air date 10/25/10)–Eli sets off the bomb.  Cole, John, Blair, Todd and Tea are all in danger.  Dani is knocked out before she can tell Todd that Tea is alive.  Hannah takes James captive.  At the end of the day Cole shoots Eli.  Dani tells Natalie that Tea is alive and was in the warehouse.

General Hospital #11228  (original air date 2/2/07)–This episode continues the Metro Court saga and takes place eleven hours before the Metro Court Explosion.  Sam is nearly shot when she tries to press the hotel panic button but Sonny talks Craig out of killing her.  Just as AJ is about to give Skye the valuable briefcase code he has a seizure.  At the end of the episode Robin is shot by Craig to prove he means business while Maxie realizes she is stuck inside the Metro Court vault with a ticking briefcase.