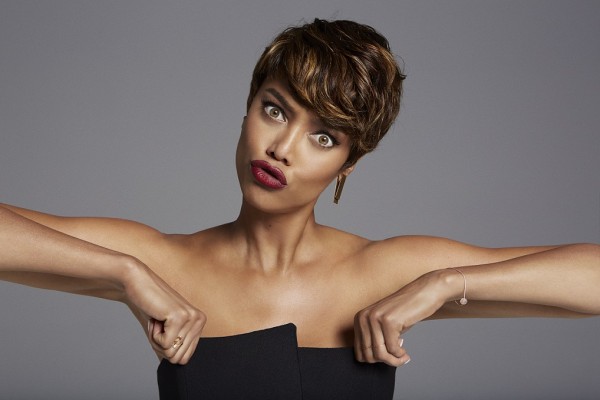 So who got the nod to host daytime’s biggest night? The answer is revealed!

As the 42nd Annual Daytime Emmy Awards returns to television this year, NATAS and the show producers needed to find a fierce host to handle the proceedings to make it a fun and memorable night.  Enter Tyra Banks!  The talk-show host, creator and producer has signed on with her signature style to host the ceremonies live on Pop on Sunday night, April 26th! In an official press release this morning from NATAS the academy announced that Banks is their gal for 2015!

OFFICIAL PRESS RELEASE: Tyra Banks, the fearless, ground-breaking, award-winning mogul, will bring her signature edge and one-of-a-kind style to host the 42nd Annual Daytime Emmy Awards airing live on Pop on Sunday April 26 at 8:00 PM, ET/5:00 PM, PT. The awards, voted on by members of the National Academy of Television Arts & Sciences (NATAS), will be presented in a live televised ceremony honoring more than 350 nominees in daytime television.

“As a network that celebrates talent and personalities who ‘pop’ in fan culture, we couldn’t be more excited to have the multi-talented Tyra Banks as the host of the 42nd Annual Daytime Emmy Awards,” said Paul Adler, Senior Vice President, Original Programming and Development, Pop. “We know she will bring her fun, charismatic energy to the Daytime Emmy Awards ceremony, which promises to be an entertaining show honoring the most notable achievements in daytime television.”

“With Tyra Banks as our host, all the pieces are falling into place for what I believe will be a truly memorable night on the legendary Warner Bros. Studios lot,” said, Bob Mauro, President, NATAS. “The fans on the red carpet on New York Street will have not only the multi-versatile Tyra Banks and some of the most beautiful and talented daytime stars to cheer, they will also have one of television’s most beloved performers, Betty White, as she’s honored for her extraordinary career.  Somebody pinch me!”

“Are you ready to get your Smize on?!!” exclaimed Tyra. “I’m honored to be hosting the Daytime Emmy Awards and can’t wait to bring a fresh edge and lots of surprises to the show. It’s a big year! I’m shaking things up, starting with a new look and a brand-new daytime talk show launching in the fall. I’m pumped to be partnering with a fun, new network like Pop to celebrate daytime TV and the diehard fans that watch every day. Let’s do this!”

The Daytime Emmy Awards recognize outstanding achievement in all fields of daytime television production and are presented to individuals and programs broadcast during the 2014 calendar year. The 42nd Annual Daytime Emmy Awards is a presentation of NATAS in cooperation with the Television Academy.

What do you think about the choice for Tyra Banks to host the 42nd annual Daytime Emmy Awards?  Good choice? Excited by the news? Let us know!

Shes better than that god awful classless Kathy Griffin but why the hell not have soap or former soap stars host?

Timmm ..
the soap awards are only 4 shows out of the many/all the daytime shows..
To have soap stars host might not be too cool but then again it might be very cool ! ..

I understand. maybe have a legendary soap star and Regis Philbin?

Because she has an upcoming show. She does well as host….they win over viewers to tune in. So transparent…a business move disguised as entertainment.

I agree. That does seem like the reason. I just hope she does well. I know she can.

If it’s a soaps- only event like the British Soap Awards, perhaps. But for me, an ideal hsot for the Daytime Emmys should be someone who obviously has ties to daytime programming, in any genre, be it talk shows, game shows, afternoon dramas series, children’s programming or news programs.

Wouldve prefered some former soap star but as long as its not Cameron Matheson or belch—Kathy Griffen—i am happy!!!

Not as good as Queen Kathy Griffin.

But a million times better than Robin Meade. I’m still having nightmares from that event.

Leo..KathyGriffin…REALLY…the only place I expect to see that beautiful disaster after last year is on a portrait in the opening sequence of NIGHT GALLERY being introduced by RodSerling (R.I.P.)…as the night’s HORROR STORY…4REAL…That picture of TyraBanks though says it all for what’s to come this year..but i’ll be all over it…sooo…Que Sera Sera…we’ll no doubt all be watching her in stunned silence like DorisDay trying to sing through the abduction of her son and impending danger of JimmyStewart…but i digress…OR DO I???

She couldn’t even pretend to be a doll pretending to be human…OH MYLANTA…i’ll have some handy!!

UGHHH AND I DO MEAN UGHHH…i’ll watch but she is A.N.N.O.Y.I.N.G. WITH A CAPITAL UGHHH…AUUGHHHH….

Instead of Tyra Banks the host should be a current soap star or a soap legend. Having Ms. Banks host is just a way for ABC/D to promote her OLTL replacement show. Hasn’t TPTB at ABC/D figured we won’t watch her show?

OLTL is off the air for some time now already. We all have to move on to bigger and better things than dwell on the past.

After all, we only have One Life to Live.

So much for the DAYTINME AWARDS. This is a joke.Guess there is no reason to watch this again !

This is great news, said no one.

Are the Daytime Emmy Awards even still significant? The first hit happened many years ago and now we have a clown like Tyra Banks hosting it? Why? Why not a Soap Legend or someone relevant to daytime TV? I haven’t watched this slop of a show for years; I merely check out the clips later. I have more important things to do in my 2 hours. Kathy Griffin was bad enough.

They should pay Drew Carey and/or Wayne Brady a boat load of money to host. They need a COMEDIAN plus they are part of daytime.

Tyra Banks, while a fine individual, will not do the job.

I’m supposed to care because…

Tara has ties to daytime as the host of her own talk show from back in the day, right? So, I’m not over concerned or feel as though they selected a celebrity from prime time who doesn’t even know one soap from the next or who’s on what talk show. However, that being said, the press release has me a bit worried when she talks about shaking things up and putting a fresh edge on things. Haven’t we had enough “shake ups” and “fresh edge(s)” which resulted in disastrous Daytime Emmy shows in the past? I hope she’s talking about… Read more »