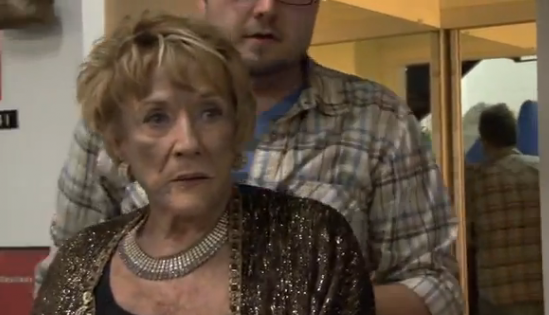 All the rage this Labor Day weekend in soapland has been  his video brought to the attention first by Daytime Confidential, that is probably the funniest thing we, or many soap fans have ever seen!

And what is even better is with video spoofs like the cast of Y&R’s “The Young and the Recyclable”, this week’s episode of  Michelle Stafford’s web series, The Stafford Project featuring Joshua Morrow (Nick, Y&R), and  All My Children’s Cady McClain  (Dixie) spoofing being an interviewer as Suzy F*cking Homemaker chatting with OLTL’s Melissa Archer (Natalie), those that are, or have been in the soap industry, are poking some serious fun at themselves.  And their faithful audience is having fun with it too, because when you break it down, soaps can be pretty outlandish!

Now “The Young and the Recyclable” features the late great Jeanne Cooper (Katherine Chancellor) in a video that tells the tale of what it would be like if Y&R recast the role of Katherine Chancellor!   On-Air On-Soaps spoke to an insider today to get some more details on where this video came from and more!  We learned that it was most likely shot in 2009 and shown at one of the Y&R anniversary parties for the cast and crew.  We also learned that Jeanne Cooper loved being part of it, and that since her passing, many of the cast members wanted to make sure they had a copy of this on DVD, as it was such a wonderful inside joke and treasure.  Finally, the scene where you see Jeanne Cooper getting into a war of words with Jess Walton (Jill), was completely ad-libbed, which is why you see Jess almost busting out laughing.  We have a feeling a lot of this was ab-libbed though!  And wait till the end of the video, where Eric Braeden (Victor) attempts to dress up as Jeanne Cooper/Katherine Chancellor.  Joshua Morrow also proves yet again, he is absolutely amazing at satire in one of our favorite moments!! And might we add, so is the late former Y&R co-executive producer, Paul Rauch who makes an appearance, and keep your eyes for Greg Rikaart (Kevin) throughout who is key to the entire story!

Below, watch “The Young and the Recyclable” and let us know what you thought of it? What were your favorite parts of it?  We thought how ever this got out on the Internet, it was a perfect way to also honor the humorous side of Jeanne, as we come to the heavy drama of Katherine’s memorial episodes  on Y&R next week on September 3rd and 4th on CBS.

I thought this was wonderful – absolutely loved it. Really hilarious to see the cast poke fun at their characters.

Thought this was one of the funniest things I have seen. Also a reminder how Jeanne Cooper lived life to its fullest and loved every minute of it. Great reminder of the feisty dame she was! In all honesty though, Eric Braeden stole the show at the end. Nobody should be consuming a beverage when they see him lol.

I cannot believe you got a copy of this. It is absolutely hilarious. I laughed right out loud quite a few times.

This was the most stupid thing that I have ever watched! How dare you make fun of my favorite show” The Young and the Restless! It wasn’t funny at all. And I took it to be an insult. I love this show and all of the characters in it.

Linda you have no sence of humour. go take your meds. you will feel much better lol.

THANK YOU i totally agree go take your meds you may feel better after! This was absolutely hilarious. Very Tongue in cheek and shows that when a soap or any show can make fun of itself it is not going anywhere for a long time. By the way Young and the Restless made this THEMSELVES SO NO ONE WAS INSULTING THEM. They were taking a lighthearted few minutes to poke fun at themselves lighten up people its a joke by the cast and crew of young and restless GEESH

I can’t believe these people saying how funny it was. I had to stop watching ’cause it was so stupid. Really? A paper bag is funny?

I guess nothing pleases you.

It was quite funny actually! Your sense of humor must be off!

Clearly you don’t understand good humor!! They are making fun of themselves get a grip!

George you asked me if it requires more intelligence to appreciate certain forms of humor–I don’t know, but I do know it requires more intelligence to defend one’s viewpoint based on sound argument rather than just putting someone down on a personal level for theirs. Telling someone they don’t have a sense of humor just because they don’t find something you find funny is a lazy argument — satire isn’t everyone cup of tea, just like I personally find bathroom humor and slapstick boring. Seeing a man get hit in the family jewels on AFV simply has no appeal for… Read more »

Linda– I know you are getting flack for saying you did not find this clip funny that you in fact thought it was insulting to the show and characters you love. First off let me say to those who are putting Linda down for her thoughts, that humor is SUBJECTIVE and NOT FACTUAL, which means something is funny if you think it is. Just like everyone has different tastes in movies, literature, television shows, favorite foods, we can have different tastes in humor. If I find something funny and you don’t that doesn’t take away from my enjoyment, and likewise… Read more »

The fact that you spent so much time explaining satire to an adult speaks volumes. Yes everyone in entitled to have different likes and dislikes(I think we all get that) but sometimes it takes and requires more intelligence to appreciate certain humor.

Now, now children. Play nice. Linda and Becky are entitled to their opinions. It WAS a little on the strange side. 😉

I think it was shot in 2010. Very funny! I love satirical humour!

If Jeanne liked it enough to do, who are we to say anything, except it was funny!

I loved it ,absolutely loved it !!
What fun !!
I wish more shows did “spoof” like this – they probably do ,but not for public consumption.
It was great !!

Very funny and very sad all in one!!!

Saw this on SOC & loved it.

Linda and Becky…do you not see the humor in this? And Linda, THEY are making fun of themselves. It’s HILARIOUS. It was made when Rauch was being forced with budget cuts…it shows how ludicrous he felt the cuts were and how the big names of the show…Cooper and Braeden would really NEVER be let go. All the players are here…I especially loved Greg…his voice over for K-Y. Even though it was short, I also loved Eileen and Melody’s bit. It just goes to show you that the cast is talented, and can more than handle comedy AND poking fun at… Read more »

That was hilarous!!! I love how the actors/crew were in on it and seemed liked they had a great time doing it.

I thought it was funny. A little strange but funny.

Unfortunately, I only saw a small portion of this – It suddenly stopped, and I could not get it to progress further. Too bad, as what I did see was funny, and I loved seeing these wonderful Actors spoof themselves. And too, such a rare privilege seeing Jeanne Cooper doing Comedy. She is badly missed!!!

lmao, I loved it… the WHOLE THING WAS HILARIOUS!!! ESPECIALLY MRS K LISTENING TO BIGGY, THAT PART WAS AWESOME

Fabulous, hilarious. Every person involved was superb. Jeanne Cooper was brilliant. Loved hearing her voice again. Thank you to whomever made viewing this possible.

I thought it was funny.