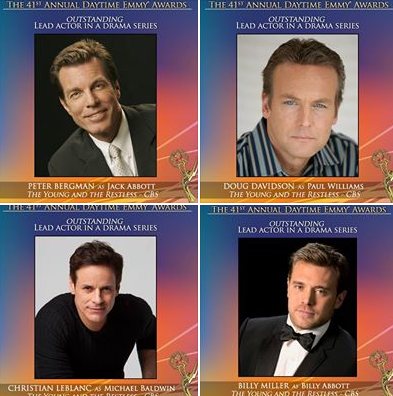 In one of the hotly contested races in this year’s upcoming 41st annual Daytime Emmy awards, five actors vie for the gold in the Outstanding Lead Actor in a Drama Series category!

Four of the men are nominated for their work on The Young and the Restless.  They are: Billy Miller (Ex-Billy), Christian LeBlanc (Michael), Doug Davidson (Paul),  and Peter Bergman Jack), and representing General Hospital is Jason Thompson (Patrick)!

Below are the official Daytime Emmy synopsis  from NATAS of their nominated performances, followed by the video playlist of their performances, where you can watch the actors work back-to-back. After reviewing the reels, let us know who you think should win the Daytime Emmy when the trophies are handed out in ceremonies on Sunday night, June 22nd!

Dr. Patrick Drake had made real progress in moving on since the death of his wife, Dr, Robin Scorpio Drake.  Patrick started dating Sabrina Santiago after the 2013 Nurses Ball. Patrick asked Sabrina to marry him and as they were about to say I do, Robin returned. Her death had been staged and she had been held hostage for the past 2 years. Patrick was thrilled to see the mother of his daughter and yet had fallen for the person that pulled him from the brink of depression. It was time for Patrick to make a decision when it came to who he wanted to be with: his wife Robin or his fiancée Sabrina.

Peter Bergman  – The Young and the Restless

Newly recovered from his addiction to pain medication, Jack is now focused on repairing his relationship with his ex-wife, Phyllis. As they endeavor to rebuild what they lost 18 years ago, he keeps running into roadblocks—odd behavior from Phyllis that he doesn’t fully understand. In his effort to make sense of these strange moments, he starts asking questions.  The answers prove to be more than Jack can handle.

Christian LeBlanc –  The Young and the Restless

Michael and Lauren’s longtime happy marriage turns rocky when their teenage son is accused of a crime and only Lauren believes his claim of innocence.  Upset with Michael’s inability to see things her way, Lauren turns to another man for comfort.  When Michael is faced with mounting evidence of the affair he confronts his wife, who refuses to admit her infidelity.

Billy Miller  – The Young and the Restless

Billy’s seven-year-old daughter Delia has just dazzled the audience at her school play, and the two head home to celebrate with Billy’s wife, Victoria, who wasn’t able to make the performance. Billy stops for ice cream at Victoria’s suggestion. Gone only moments, he returns to find that Delia has gotten out of the car to chase her dog and is now lying by the side of the road, the victim of a hit-and-run-driver. She is rushed to the hospital but doesn’t survive. Victoria tries to comfort Billy but all he can do is watch the video of Delia’s big night over and over. At the park, he finds brother-in-law Adam, with whom he is not on the best of terms. Billy lashes out at Adam when he pretends to understand what Billy is going through. Billy is adamant with Adam that what happened to Delia was not an accident, and he’ll make sure the driver is punished. When Billy returns home he is upset that Victoria has removed the party decorations and put Delia’s belongings away, but eventually realizes how much he needs to lean on his wife.

Doug Davidson  – The Young and the Restless

When Police Chief Paul Williams finds teenager Jamie Vernon, a victim of online bullying, poised to jump off a rooftop ledge to his death, he responds both as a law enforcement officer and as a father still mourning the loss of his own son. Determined to save this boy even though he was unable to save his own, Paul makes a heartfelt appeal to Jamie, sharing his own experiences and convincing Jamie that he has value.  After Jamie comes down from the ledge, Paul gives in to his anger at the near loss of a precious life. He confronts the mother of the girl who bullied Jamie and finds his own parenting skills called into question.

All My Children's Matthew Cowles Has Passed Away!