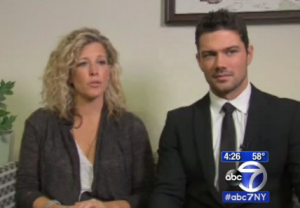 Social media has become a key component these days to our soap opera habits: we chat amongst ourselves, and even with our favorite soap stars, executives, or personalities.  Through social media there is instance feedback on storylines, couples and more,  and a way for cast members to connect to their loyal audience.  Of course, with the good of social media, there can also be the bad.  But if used the right way, fans can chat it up with their favorites, while the cast tries not to spoil any upcoming storylines!

Finola Hughes related, “What I like about (social media) is the fact you are instantly in touch with the fans, the people who are watching the show”  Meanwhile, Herring revealed: “I think there’s a fine line we’re trying to walk to engage the younger people and keep everyone active, but also keep the stories on edge.”

William deVry added,  “And there is a constant sort of struggle as to how much you want to share with the fans.”  While Laura Wright chimed in: “We’re not even supposed to tweet who we worked with that day!”

Watch the segment after the jump! Then, let us know if social media has become a key component of your GH soap experience?

No doubt.. they way people watch media has changed dramatically during this past decade.. The soaps need to change and come into the new media styles of programing, the 21st century media,, I got a kick out of how GH shows the characters texts on the screen, big and easy to read.. Sopas need to modernize, and that means much bolder and a change of lifestyles to survive in this era…. It is great to be able to text/chat with soap stars.. fan letters went out decades ago lol .. goes to show how the world moves forward.. and that… Read more »

I happy to see TPTB promoting GH. I wish they would promote the show more in mainstream media.

No wonder why I stopped watching local TV newscasts. They’ve become nothing but infomercials. On these broadcasts, the amount of cross-promotion and shilling for other programming on the station and its parent network has become beyond nauseating. Broadcast journalism apparently went out the window a long time ago. And seriously, do we really need MORE local news in the 4 pm hour on these ABC stations?? Then another hour and a half before the national network news at 6:30?? And now there’s a full hour at noon!! Please, enough already. I know it’s cheap to put on, but It’s overkill… Read more »

Frankly, very few people in the 25-55 age group watch any daytime show live because most of us work during the day. Most of the people I know who still watch any daytime soap do it via DVR, On Demand, Hulu, or the network’s website. Those views are added into the live ratings. But, it takes up to 2 weeks to get the data from other sources. I don’t think lead-ins matter for a soap. A soap fan will find the program they want regardless of what is before it. That’s how most people younger than 70 watch tv now… Read more »

I agree with you so strongly, and love that we are no longer held hostage with set viewing times and worn out videotapes.

agree KansasGuest…that’s how/when I watch most of my shows..when i can or prefer to. And then there’s binge watching…so fun to sometimes just sit down and watch a few shows in a row. You don’t get that feeling that it’s over too fast. Unfortunately, advertising means dollars…and the more of us that don’t watch during advertising hours might unfortunately add to the demise of the ratings/the profit…and thus the soap era.

Christie…Its’ not just news shows…talk shows which come under the guise of entertainment always promote other shows, films, albums, books, etc. Every guest that appears on a talk show is promoting his/her/their new project. The “celebrity” gets to tout his wares, the fan gets to see his/her public celeb “crush.” LOL…

In the case of this newscast I think anything to promote GH is a good thing…we need the ratings.