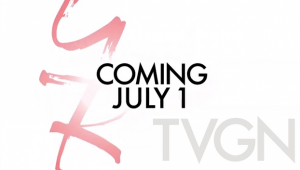 Circle the date of July 1st!  That is when Y&R fans will need to tune-in to TVGN which will become the exclusive basic cable home for the number one soap starting at 8 p.m. ET weeknights!  Currently, TVGN is running on-air promo spots promoting the move and the switch from SOAPnet for same day rebroadcasts to TVGN!

In addition, to help kick-off the new cable home for Y&R, on Monday June 17th at 9PMET/PT, the network will air a special episode to welcome their new Genoa City family, entitled The Young and the Restless On-Set: inFANity.

Now after the jump, watch one of the TVGN promos featuring Billy Miller and Amelia Heinle as Billy and Victoria and let us know if you will be watching Y&R on TVGN this summer!

Love this!! Good for Y&R. SoapNet was a mess and I love using Villy to promote it. BM and AH are adorable as always in that clip. Good luck!!!

do u know what channel TVGN is on direct tv?

This is great way to promote the show’s new home…good job CBS since you own 50% of the network.

now pp this sept. needs to get tvgn to air oltl repeats!!!

I don’t think this will happen to be honest but since CBS is half owner of TVGN… I do see B&B eventually coming aboard to televise the episodes in evening & maybe DOOL because Sony has a good relationship wCBS. I can see The Talk also being rebroadcast on TVGN. I think CBS will use this opportunity to show rebroadcasts of their daytime lineup.

Youre probably right…but one can hope someone will rebroadcast them. thanks 4 reply.

Very nice. Love it. Billy & Victoria are my favorite couple and my main reason for watching. Will definitely be tuning into TVGN.

So what will happen to the extra blocks of time on SoapNet?

I would prefer they show rebooted OLTL and AMC

I still have soapnet on direct tv .

I have charter and i still get soapnet…for now?

Billy and Vicky are a great couple together.

Yes PP needs to get them to Air AMC and OLTL

It’s going to be really annoying to have the the channel guide scrolling at the bottom of the screen.

You need satellite TV then. No scrolling guide on TVGN

I don’t have satellite just cable there isn’t any scrolling anymore, it’s on separate channel. I don’t think it will be a problem because TVGN has changed into more cable network channel.

Glad to see Y&R on TVGN also happy as all get out that Big Brother After Dark will be on TVGN as well.

What is the song in the promo

My awful cable provider does not carry TVGN. Of course, we have an entire channel devoted to fishing….

Lordy lord my husband would love that channel and thank the sweet fairies that we don’t that channel!

I am soo disappointed that this show is going to be moving to TVGN. I have watched this show for over 40 years. I submitted a request to my cable provider Time Warner Cable to please get TVGN and since they have not done so I am now forced to watch my favorite show on regular tv.

Please help me to convince Time Warner Cable to pick up TVGN. Thank you in advance for your help in this matter.