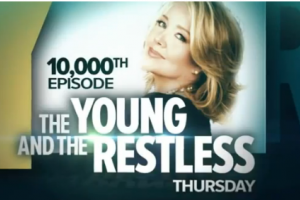 It is a historic week for the number one sudser The Young and the Restless!  The series that has been number one for twenty three years is about to celebrate the airing of its 10,000 episode!  And to celebrate the milestone, CBS has rolled out an enticing promo spot which features, Sharon and Tucker about to take their wedding  vows, only Tucker admits, “He’s been sandbagged.”

And as we all know, Victor who has been MIA, and love of his life Nikki are front and center as this story of familiar and familial drama unfolds, in what was the final script of ousted head writer, Maria Arena Bell.

But while Y&R is set to give its fans the 10,000 episode, there are a few events surrounding the big event to be noted!  First on Wednesday September 26th live on The Talk, Sharon Case ( Sharon) and Joshua Morrow (Nick) will chat with the ladies of the panel about Shick’s long standing and tortured relationship, and of course being part of the iconic soap opera!   So make sure to tune in at 2PMEST/1PMPST.

Then on Thursday, Melody Thomas Scott (Nikki) and Daniel Goddard (Cane) will be live tweeting during the east coast feed of the 10,000 episode at 12:30EST.    Goddard let his fans know by tweeting, “Sept 27th Melody Thomas Scott & I will be live tweeting for the Y&R 10000th episode! Follow now for all the tweets!”  Thomas Scott announced on Twitter, ,”I will be tweeting LIVE next Thursday,9/27 during the east coast airing of #YR (10,000 episode) Daniel Goddard will be joining me!”

After the jump, watch this week’s big promo and then let us if you will be watching the 10,000 episode, The Talk, and will be part of the live tweeting with Melody and Daniel!

I am excited for the 10,000 episode and all the festivities, but the promo left much to be desired. I want more! Ha! Ha!

As is the case with most climaxes of a story, it should be interesting to see whether next week is good or a snoozefest. I hope poor Paul’s situation gets wrapped up and Victor gets back to running his company and then the new head writer give us a good, but fast-paced story.

I LOVE SHARON and Drucilla!!! I am so excited for Dru to return.

So in love with Sharon! She was so funny at Victor’s funeral. OMG she also can do comedy also! Just loved it!

LOL now Y&R is copying the great GH once again with the ”live tweeting”
What’s next Y&R will have band as ” Port Chuck”” lol
There will be more GH familiarity with Y&R with JP taking over.
Y&R has been struggling for a long time, how it stays on top rating wise is a mystery.
I am looking forward to the changes and hopefully better stories and if lucky Y&R will go out of the box! 🙂

I’m not excited about the 10,000th episode but I can’t wait to see Joshua Morrow and Sharon Case on the Talk. Love Shick! They’ve been a huge reason why I’ve watched Y&R for so long.

I am loving the fact that the suits at CBS are finally cross promoting Y&R with other shows (TPR and The Talk). It’s a huge milestone and it all leads up to the 40th anniversary of the show in the first part of next year. The Young and the Restless is known around the world as the best, and most iconic daytime serial out there, and this fan will be front and center for all of the fireworks! Thank you, CBS!

Just finished watching 10,000 show ( day earlier here) I was really disappointed, with all the hype I was expecting something more than what it was. The best part for me was new photos for the opening sequence FINALLY. I think I was more excited about that than for the whole show, because it has been a pet peeve of mine for years that they didn’t update those photos that were so out of date. And now they have, I hope that is beginning of great things to come.

Mary SF, what did you think about episode 9,999? I don’t know if it was my hormones, but seeing the sham of a funeral that the family had to endure and seeing them so heartbroken (especially Nikki) made me cry. It was great to see Victor walking over to Nikki, but after what you said, I fear that this feeling will be shortlived. I hate when a big story has climaxed and then there is a soft landing and then back to business as usual. I am glad that we will finally get to see the long-awaited new opening. I… Read more »

I have been watching since 1979 and I lost count the number of times I have seen funerals for characters I know are not dead that I find it hard to empathize with the emotion. So for show 9999 I like they played up the farce that it was because it made think at least they are not attempting to convince me invest being upset over a death we all know didn’t happen again. I give MTS credit for pulling off another grave side scene off, but it would have meant more if I thought the character really died, like… Read more »

I think there is something morally corrupt with Sharon right now. I know that it is just a SHOW, but think about the implications of having a “body” cremated? It was very unfair of her to take some John Doe and cremate it without finding out who he belonged to. What about that person’s family? I guess I am in the minority because I do not for one second think Sharon’s antics are funny. It is sad. I don’t care what she knows to be true or not, but for the rest of the family to believe he was dead… Read more »

Perhaps Sharon didn’t really cremate John Doe. All we heard her say was she wanted to take care of things right away. She could have paid the attendant to tell the family the body had been creamted when in reality she made other arrangements to store him until she could figure out who he was. I think that is plausible considering how she treated the urn at the funeral. Maybe she knew no ashes were really in it. We can only hope the writers will address this in up coming show and tell us ,who this guy was, if not… Read more »