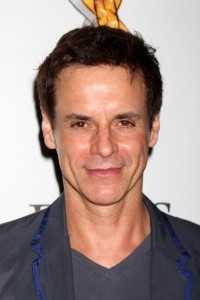 It’s been a few months since we have given out the On-Air On-Soaps Power Performance of the Week accolade, but that is about to change, because in riveting and key scenes on this week’s episodes of The Young and the Restless, three-time Daytime Emmy award winning actor, Christian LeBlanc (Michael) was once again in the spotlight, and boy …  did he deliver!

The brilliant complexities set in motion by the Y&R writing regime has once bad boy Michael Baldwin desperately trying to keep his troubled son Fenmore (Max Ehrich) from going down the same path as he did.   And with that comes drama between father and son, and husband and wife.

Lauren (Tracey E. Bregman) is beyond frustrated with her husband that he could choose and believe helping bullying victim Jamie (Daniel Polo) over their own son, Fen!  On-Air On-Soaps previewed this story back in December with our very special interview with LeBlanc, Bregman and Max Ehrich here!

In key scenes on Tuesday and Thursday’s episode of Y&R, Christian LeBlanc reminded us all of just why he has those three Daytime Emmys!  When Michael confronts Fen about Jamie, and the possibility he could face jail time for his actions,  Fen pushed back and played dirty throwing Michael’s previous crimes in his face!   It was here that the masterful work of LeBlanc was at its best.  Horrified that his son knows of his past with Christine and Paul, and through his tears, Michael tells his son that it is indeed true.  However, through years of therapy and begging forgiveness to all those that he hurt, he was able to change his life.  Now Michael fears for his son, if he doesn’t change his ways.

And still later in a subtle and magnificent performance, LeBlanc listens as Jamie  is brought to the Baldwin home to give his statement to Michael (who is the DA), with Paul present, of his account of what Fenmore had perpetrated on him.  As Jamie gives his statement, Michael listens intently with tears in his eyes at the thought of what the more underprivileged Jamie suffered at the hands of his son!  Next, Michael has Fen arrested and cuffed, as Lauren looks on and says she will never forgive Michael.  This sets the stage for significant trouble for Michael and Lauren’s relationship! The question is;  will this duo be able to withstand the riff that Fenmore’s troubled life is causing them?

In his portrayal as a conflicted father on the right side of the law, Christian LeBlanc’s range of emotions, and his ability to convey so much, whether it is in a emotional battle of words, or a restrained scene where you see it all play out through his eyes, gives him the honor of On-Air On-Soaps Power Performance of the Week!

Watch Christian’s ‘Power Performance’ clips below! Then let us know, do you agree with our choice? And, are you into this storyline that is tearing the Baldwin family apart?

Agree. Christian LeBlanc was perfect with the bullying storyline as does his on-screen son, Max Ehrich (Fen).

Agreed! Christian LeBlanc is an awesome actor and would be great in movies. I am also loving Josh Griffith as a head writer. He is giving Christian great storylines to show his awesome talent.

Excellent pick, Michael – I hope Mr. LeBlanc submits either day’s episodes for Emmy consideration! This bullying storyline has been very entertaining & well-performed by all involved!

Christian is doing an awesome job. He is a wonderful actor. This storyline has become my favorite storyline on the show right now and I am looking forward to seeing how this is all going to end.

Wow I am stun- it has been so long since I heard anything positive about this show that I forgotten what it is like — I agree CL did a great job, but I still find it difficult to believe Fen went being this nice nerdy guy to Ricky 2.0 just because he liked Summer and was jealous of Jamie. I think the actors are doing a good job portraying it, just find the premise of it is a bit of stretch given Fen has no history of behavioral problems– I’m incline to take Lauren’s view- that Fen is innocent… Read more »

I agree! Those scenes this week have kept me on the edge of my seat! Very exciting!

With Friday, February 1 being the last day that we saw Hogan Sheffer’s (his contract expired in November and he was not kept on. So any material we saw up until the 1st of February did have some of Hogan’s writing in it) name in the credits as a part of the writing team and the last hold over from MAB’s regime, we can now breathe a collective sigh of relief and now know that anything on the screen that is written is written by the entire writing team that Josh Griffith assembled together from the time he was hired… Read more »

Fantastic!!!!! CL did as he always does, delivers the goods.

Christian was awesome in his scenes. I wouldn’t be surprised if he wasn’t up for another Emmy Award. Such a brilliant actor.

I agree. Both he and Tracey are awesome. I just wish the storyline weren’t so forced. Y&R just doesn’t flow organically like it did up until 2005. The new regime can take a cue from Cartini at GH and start mining this show’s rich history of interesting characters and stop forcing new ones on us.

Amazing actor I think he will be nominated for an emmy. The new writers are really bringing very powerful material. Keep up the good work.

Y&R has gotten it’s groove back. The writers are magnificent. Yes, I agree, Christian LeBlanc delivered Big Time. I was getting kind of fed up with him letting his family get away with murder. By right, Keving and Phyllis should be in jail. Now he is keeping it real and delivering as only he can. Let us not forget about Peter Bergman in his scenes dealing with his addiction. Another great talent. I am loving Michael. I take my hat off to the new writing team. They are Bringing it to the table.

Finally someone appreciates this great actor who always hits it out of the park..Not only is handsome, Sexy and so believable..I laurgh with him and i cry with him..CLB is delivering and I to am congratulating the writers for seeing this talented man front and center where he belongs..Christian has always made Michael real and you and you sometimes forget that Michael Baldwin is not a real person but a Y and R character.. I have always been a Michael fan and a Christian LeBlanc fan there is no better human being and truly one of he best actors on… Read more »

CLB was very moving and powerful in his scenes. He, Tracey Bregman, Doug Davidson, Max Erlich, and Daniel Polo have all been terrific in this story. It is tough to see such a strong marriage as Lauren and Michael’sgo through this, but I think it resonates more because we know how solid they are as a couple and how much they love their son. This situation can happen to any family. Thank goodness Josh Griffith realized the talent he had in Christian, Tracey and Doug as well as young actors Max and Daniel and wrote a compelling story for them.… Read more »

Great choice Michael. I am beyond thrilled to see CLB finally get a storyline again that showcases his amazing talent. He is well deserving of those Emmys; and it was beyond frustrating for the fans who know him to be the Powerhouse actor he is to see him be written simply as Victor’s lapdog all that time.