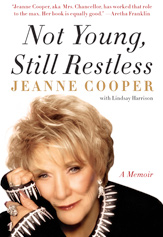 Who says that soap stars and soap fans who watch them every day aren’t a huge demographic and important audience in pop culture?  Well,  look no further than today’s fantastic news from Harper Collins, the publishing entity behind The Young and the Restless’ Jeanne Cooper’s (Katherine Chancellor) tell-all memoir, Not Young Still Restless!  Jeanne’s book is now a New York Times best seller.  It’s in at number 25!

When Cooper was informed of the news she was said to be absolutely ecstatic when she was called by her publishers this afternoon.  Jeanne then jokingly said that maybe she would get a raise at Y&R because of it!

So soapers, if you have not had a chance to get your copy of Not Young, Still Restless do so now and help push Jeanne to the top of the New York Times Bestseller lists! Let’s show em’ soaps still matter and how much we treasure the beloved people in it!

In the meantime, check out our  recent On-Air On-Soaps interview with the soap legend,  and our recent video interview Skype chat with Jeanne  to get more scoops on Jeanne’s life, and what went on behind-the-scenes at Y&R!

Why wasn’t jeanne on the cbs morning show?

Going on Amazon to buy it right away!

FANTASTIC NEWS!! So excited for Jeanne and her success as an author!! Is there nothing this woman can’t do and turn into gold?! She is amazing. Thank you also, Michael, for the autographed copy of “Not Young, Still Restless!” Just received it in the mail last night and I’m over the moon!!!

I am reading the book at the present time, it is so good and thanks for writting the book. I love for you to come to Greenville, South Carolina.

Jeanne Cooper, you are amazing, there will never, ever be another like you… Caught some old episodes on YouTube, just to reminisce, and she is one class act with the acting chops to match… Keep going, Jeanne!!!