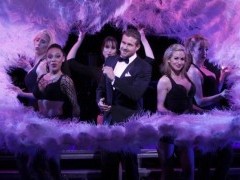 The curtain came down on a fantastic 7-year run for ABC Daytime Broadway Cares/Equity Fights AIDS event last night in New York when the stars of All My Children, General Hospital and One Life to Live headed to the stage to sing, dance, and perform their hearts out to a packed crowd.

We hear that over $301,000 was raised for this year’s event and that during the entire run of this special one night showcase, the event has now raised over $1.8 million towards the fight against HIV and AIDS.

Kudos to All My Children publicist, Michael Cohen for creating the ABC Daytime salute, and this year there were some fresh faces plus some of the regular ABC Daytime superstars who served up an entertaining evening.  Some of the highlights included: GH’s Tony Geary performing, I Am What I Am from La Cage Aux Folles, Jonathan Jackson’s, Endless Night, OLTL’s Kristen Alderson performing, Trouble, and her on-screen mom, Kassie DePaiva singing, I’ll Never Fall in Love Again.  Llanview’s resident heartthrobs, David Gregory, Nic Robuck, Lenny Platt, Tom Degnan, Josh Kelly, and Mark Lawson were involved in some solo numbers, and then some of the guys took to a skit titled, “Dude, Where Is My Shirt?”  Soap fan Jan Morrison won the opportunity to perform in it by being the highest bidder on the online auction for the event.  Susan Lucci made a very special surprise appearance near the end of the show.  It is  bittersweet to have to see this powerful and creative event have to come to a conclusion, but before we do, take a look at our special photo gallery below from the red carpet arrivals to the performances that rocked the house!

Remember to view the photo gallery slideshow in it’s entirety, you can hit the NEXT GROUP icon to the right of the + symbol to view all 23 images in the gallery, or, you can just let the slideshow play.  Enjoy!

Noah Newman Switcheroo! Schmidt back in, Kleintank out at Y&R!

I would have given everything to see Tony Geary sing “I Am What I Am” in drag no less!…

Can some of these people (Tom Degnan, Nic Robuck, and Josh Kelly) ACTUALLY carry a tune, or were they just good sports and winged it out for a special cause?

OK, so I see JK’s picture above the article! So, is this guy really a good singer if anyone was there that night at BC?