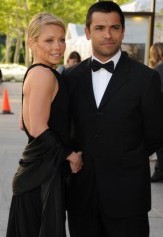 ABC’s Emmy Award winning daytime drama, All My Children will celebrate its 40th Anniversary on January 5, 2010. In celebration of this milestone, the show will welcome the return of Kelly Ripa and Mark Consuelos in two special episodes airing on Monday January 4 and Tuesday January 5.

“It is always great to come home,” says Kelly Ripa.

“As soon as a few of its colorful residents invaded my imagination over forty years ago, Pine Valley became my second home and family. A very large and loving family, beginning with the devoted writers and talented actors who bring the characters to life. Then production, from the executive producer and her staff, to studio crews, whose technical skills work the magic of television. And all this done day, after day, after day. Finally, but most importantly are the millions of viewers down the decades whose loyalty to All My Children and its quixotic characters has kept us on the air for 40 years. To this family, I am forever grateful,” says show creator, Agnes Nixon.

Ripa, Consuelos and La Rue will be joined by a list of fan-favorite veterans to celebrate All My Children’s 40th anniversary including; Julia Barr, Laurence Lau, Taylor Miller, James Mitchell, Leven Rambin and Eden Riegel. In story, Pine Valley will be elected “The Most Congenial Town in America.” Hayley (Kelly Ripa) and Mateo (Mark Consuelos) return to their home town for Hayley to produce and host a documentary for her television show “The Wave,” as she interviews her family members, friends and citizens who all call Pine Valley home.

The timing of the two special episodes also marks a new and exciting beginning for All My Children, as January 4 is the show’s first day of production in Los Angeles. The state of the art studio will allow the show to move into the future, broadcasting in high definition with more expansive studio space and sets which will enable creative growth and storytelling. The show’s first HD broadcast is anticipated sometime in February.

All My Children has successfully maintained its popularity and continues to be one of daytime’s most compelling dramas. All My Children took home the 1998 Emmy Award for Outstanding Daytime Drama Series, the third time the show received this top honor, having also garnered the award in 1994 and 1992. In 2004 the show also received its third consecutive Emmy Award for Outstanding Daytime Drama Series Writing, its third Writers Guild Award and its fourth GLAAD Media Award in March 2007.

Created by Agnes Nixon, All My Children premiered on the ABC Television Network on January 5, 1970, as a half-hour show; seven years later it expanded to an hour. Julie Hanan Carruthers is executive producer. All My Children will be produced in Los Angeles, beginning January 4th, 2010.

Related Topics:AMCRipa and Consuelos
Up Next

SOAPnet.com's Best of the Decade moments on OLTL!