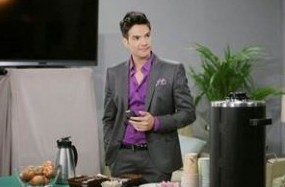 Mexican telenovela, film, stage actor and musician Andy Zuno has been cast in the recurring role of “Rafael,” on The Bold and the Beautiful.   Zuno began taping on Tuesday, May 7 and his first episode aired on Thursday, June 20, 2013.   You probably noticed he is in ca-hoots with Linsey Godfrey’s character of Caroline in trying to get Carter and Maya together!

“Andy is a talented young actor and is a great addition to our cast,” said Executive Producer and Head Writer Bradley P. Bell. “He brings forward a strong comedic talent that plays perfectly into the hot and ground-breaking story we will begin telling this summer.”

B&B is the first and only daytime drama to simulcast in Spanish utilizing SAP (Secondary Audio Program) technology. Zuno will translate his own character into Spanish for B&B SAP simulcast.

Best known for his portrayal of “Hugo Arango” on the telenovela “Al Diablo con Los Guapos,” for which he won a FAMA Award for Best Supporting Actor, Zuna has also starred on Spanish language programs such as “Pasión,” “Mujer Casos de la Vida,” “Decisiones Extremas,” “Loteria” and “Amar de Nuevo.”

Zuno got his start on the big screen in 2004 when he was cast in the film “Emisario del Odio.”  He also has an extensive background in theater, including roles in “The Play About Baby,” “The Goat,” “Te Odio,” “La Luna 100 Watts,” “El Códex Romanoff,” “Unos Cuantos Piquetitos” and “Innana Queen of Heaven and Earth.” He received the Association of Theatre Journalists Award for Best Leading Actor for his performance in “Mentiras.”   In addition to television and film, Zuno is a talented musician.  In June of 2010, he released his first single as a solo pop artist, “Suma de Dos,” from his debut album Andy Zuno: Mas de Una Vida.

B&B fans, what have been your first impressions of Andy Zuno as Raphael?  Thumbs up? Share your thoughts below!

I’m happy about this, I love the way he & LG play off of eachother. they are the perfect besties.

Telenovelas tend to have the same problems w/ racial diversity as american day soap operas. Majority of actors on telenovelas are light skinned Latino actors and white hispanics who are cast as the leading chars. While Afro latinos and dark skinned Latino actors tend to be cast as supporting chars and comedic relief and poor compared to the rich chars who are white hispanics. Telenovela rafaela used blatant racism as “comedic relief” for a scene. They had a racist char bow to an Asian cook bec she thought that she was Japanese when the cook was Chinese. That same racist… Read more »

People wonder how Y&R and BB are the top 2 soaps for decades..
CBS shows Y&R and BB in 36 countries..
And now, B&B will be the first and only daytime drama to simulcast in Spanish utilizing SAP..
Having more viewers does not mean the 2 soaps are the best for the past 3 decades, they just have more people watching in 36 countries..

Could this be B&B’s first gay male character? The first one in a fashion industry in Los Angeles? lol

They can’t have a gay male character because Brooke wouldn’t be able to have sex with him and we all know how Mr. Bell loves to have Brooke hook up with every male on the show—

Amen Mary way to go with the sarcasm I love it!

lol this is true!

It appears he is gay. Recall, Rafael balked at having to accompany Caroline to the July 4th party, because he’d already made plans to bring his apparent boyfriend named “Mario.”

Really Fox? Thank you, hopefully he is!

Yes, Blake, really! .. And since then, Nelson Branco raised the subject in his newsletter writing, “B&B kicked it up a notch by giving Caroline a gay friend, Rafael. Played perfectly by promising newcomer Andrés Zuno, B&B is portraying a gay man who is slightly flamboyant yet masculine. That’s not easy to do — in any medium.”

So far I don’t like his scripts as he appears to be easily bossed around by Caroline.
I give this a thumbs down for the story line.

Not liking this storyline at all. Very silly. Cannot stand Caroline-they have destroyed her character.

I agree with Gloria I use to like caroline But now She acts like a Spoiled Brat (nice words) If she’s so Thinking Carter is all That… Then She Needs to Be with him & leave Rick alone…….As for Raphael…He needs to be casted as a closet gay that Brooke goes after….But can not Get …But Not Understand “Why???” That He Is Not responding to Her Advances…….