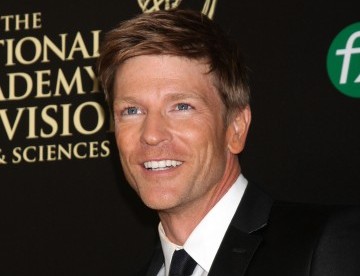 As fans of The Young and the Restless know, late last year Burgess Jenkins departed his role of Billy Abbott, and wss eventually replaced by Jason Thompson.

Back in November of 2015, soap fans were informed in a statement by Jenkins that he chose to leave  the CBS Daytime drama citing one of the main reasons for his decision:  “It”s been a terrific time, but after a lot of thought I have made the difficult decision to leave The Young and the Restless.  Commuting back and forth from the East Coast where my home and family are based has been challenging.”

Now in the Winston-Salem Journal, Jenkins revealed more details about why he chose to exit the primo role.  It had to  do with wife, Ashlee Jenkins who was battling breast cancer:  “I departed the show because my wife was diagnosed with breast cancer back in November, and continuing to travel back-and-forth from the East Coast to the West Coast every week would have made it impossible for me to take care of her.

Jenkins addressed why the couple chose not to make any public announcements until they got a better idea of her prognosis. “At this point, however, we know that she is going to be OK … just in for a long and grueling battle with chemotherapy and radiation. Which stinks, but it’s a real blessing just knowing when we wake up in the morning that she’s not fighting for her life…. It’s great to see her back to normal.”

Burgess also addressed how touched he has been by the fans support from his work on Y&R: “The fans have been tremendous, a great outpouring of folks either asking me to stay or wishing me well, which is appreciated. It’s nice to know that you’ve told a good story and left an indelible mark.”

According to the Winston-Salem Journal, the actor is currently back w0rking with Actors Group, an acting school he started in Winston-Salem that helps prepare students for film and television work. “It’s a studio I’ve had going for nine years and something that I love dearly, so it is good to be back in the saddle with my other instructors and students. Frankly, nothing is more thrilling than watching the students grow and succeed and book work.”

Share your thoughts on Burgess opening up about why he left Y&R in the comment section below!

GENERAL HOSPITAL: What Does Griffin Want To Tell Anna? What Should Helena Leave To Her Enemies In The Will Reading?

Burgess…glad to see your priorities were in the right place. And good news to hear about the improvement in your wife’s health problem.

Good for him, putting his family above all else. Hope she becomes a cancer survivor.

I completely understand Burgess and Ashlee’s decision to not go public at first about her breast cancer diagnosis until they had a much better idea of what they were dealing with. That’s a very private issue and should be dealt with accordingly and only shared with others when the affected parties are ready to share the details of what’s really going on.

I wish Ashlee a speedy recovery and it is refreshing to see a husband give up a very good paying job to spend more time with his ailing wife and family.

I’m happy for the Jenkins family. I wasnt a big fan of his Billy Abbott BUT warmed up to him and thought he was finding his way. I’ve often said, if Jack Wagner DOES NOT want to return to GH, I think Burgess could play that character.

What a good man to put his wife’s care above his career. All the best wishes for them and their family.

You were a great Billy…..wishing you the best !

I applaud him for putting family first before work, but he was very miscast as Billy Abbott from the get-go.

Best wishes to him and his wife in the days ahead.

Unfortunately at some point everyone faces health issues, either their own or someone they love..even people we watch on TV to sometimes escape our own problems.

Wishing the best for rhem.

Happy to hear that your wife is doing much better now. I loved watching you on The Young and The Restless ❤️.I was so sorry that you left but we now know why. You are a wonderful husband to have made the decision that you did. Family comes 1st. My best to you and your wife. Ashlee is a lucky woman to have you support her through this. Hope to see you back on tv one day soon. Best Wishes❤️ Good Luck to Ashlee

This demonstrates what a well ground person he is. I applaud his decision and wish the very best for Burgess, Ashlee, and their entire family.

THIS IS A REAL MAN WHO PUTS HIS WIFES HEALTH AND FAMILY BEFORE HIS JOB…..MISS YOU….. WISH YOU AND YOUR FAMILY GOOD HEALTH AND MUCH SUCCESS….

As a husband and father you done good!!! I do miss you playing Billy but you are where you should be. Praying for the best for your wife and family. I’m also a 16 year breast cancer survivor.

May God heal her body! I’ll pray her strength in The Lord!

I am happy that his wife is doing so well. What a good man, to put his wife first.

I would love to see him back in the role of Billy Abbott now.

Love watching Y & R, your role as Billy & love all the actors in the show. We are so far behind in episodes her in Australia, I have watched Y & R for many years now. Wishing your wife all the best for a positive and speedy recovery, she is very lucky to have such a wonderful and caring husband, family always comes first. God bless you all.

Wishing all the best with love, hugs, healing, prayers and blessings.

Oh my gosh, way to go BJ, being the leading man in your own life. What a wonderful man. My prayers go out to his wife going through this battle. I found a lump recently and it is terrifying just dealing with your own thoughts and imagination. , so I’ll be praying for peace for her through this battle. Praise the Lord they are a team. Support is such a wonderful gift in marriage. He seems like a real gentleman from what I’ve heard out of him in interviews.

Wishing the best to you and your family! Happy to see your priorities are in the right place. Happy to hear the good news about the improvement in your wife’s health. God bless!

Another wishing the best to you and your family.

You have better things to think about, but I had fallen into your Billy.

I gotta say…as time went on, Burgess’s, uh, take and all on Billy Abbott ended up boring me. But, the fact that Burgess is so HANDS ON in taking care of his wife as she’s battling breast cancer…to me, that is an example of A REAL MAN!!!!! BRAVO TO YOU, BURGESS!!!!!