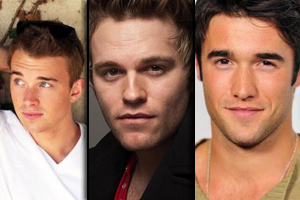 Many of your favorite daytime and primetime soap stars, past and present made it into After Elton.com’s sixth annual Hot 100 reader poll, where over ninety thousand votes were cast by their readers for over fifteen hundred different men.

According to AfterElton.com, “Given their readership of gay men and their friends, it’s no surprise that gay or bi guys are well-represented on this year’s Hot 100 (roughly 20%). And many of the straight folks who made the cut have either played compelling gay roles before, or have spoken up in support of marriage equality and GLBT rights. Our diverse list includes actors, musicians, politicians, and athletes.”

Check out the list and let us know who you think is the hottest from the Hot 100! And, from the men past and present in soaps who made the top spots!

Insulting Article by The Hollywood Reporter on Daytime Community At Daytime Emmys!

Eileen Davidson Rejoins Days of our Lives as Kristen DiMera and Susan Banks!

Matt Bomer for sure!

I’d have to agree with this list. Those guys are hot, Hot, HOT!!

It is ridiculous that Jake Silbermann is not on that list. But that’s AE’s continued bias against him.

What continued bias? Do you really think theire were behind the scenes shenanigans involved?

Chandler is smokin’! So are the other guys for sure.

Van Hansis is the hottest.