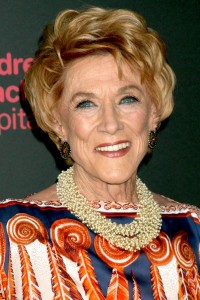 Today was a hard day for many of us in the soap industry who came to know and love the beloved Jeanne Cooper (Katherine Chancellor) of The Young and the Restless.   A year ago on this date, Jeanne passed away at the age of 84 leaving behind millions of fans and legions of friends.

Jeanne’s son, Corbin Bernsen reflected on his mother’s passing a year later with TV Guide Magazine’s Michael Logan, where it was also revealed that Corbin will return to Y&R and continue carrying on the torch when Father Todd returns for a not-so-happy occasion.   Here are a few excerpts from Corbin on how he has coped with the loss of his incredible mother!

Corbin on the feelings the anniversary of Jeanne’s death brings up:  “I can’t lie. It’s really tough. This year has been very challenging, enlightening and exhausting — especially hard in these last few days leading up to the anniversary. My mom was the center of my support system, that place I always went to talk things through, whether I was feeling joy or fear. She was always there with a huge, open heart and the best advice. (Laughs) She could quickly cut through all of your bulls–t! She knew the difference between real concerns and imagined ones, and she had this wonderful healing presence. Her touch literally made me feel better. And, God, how I could use some of that right now! Twelve months later, I’m still grieving for her.”

Corbin on going back to do a stint on Y&R and how it helps keep him connected to Jeanne’s work life:  “I got a wonderful note from (Y&R associate producer) Josh O’Connell telling me that the special tribute episode that the show did for my mom has been nominated for a Daytime Emmy, and that just feels so incredible! So does going back once again to play Father Todd. This time I’m doing four episodes, working with Doug Davidson (Paul) and Lauralee Bell (Christine), which my mom would have loved. She adored them. I really like keeping this link to the show, because it’s also a link to my mom’s fans.”

Share your thoughts below missing Mrs. C and the Jeanne Cooper one year following her death, and what did you think happens that brings Father Todd back to Genoa City?

Wow time flies, I miss Jeanne Cooper so much.

Hard to believe its been a year already…im not a regular watcher(only occasionally) but i can tell the show hasnt been the same without Jeane Cooper! Meanwhile, i always thought the actor playing Stitch resembles Corbin Bersen who i think shouldve played his father!!!

I feel for Corbin Bernsen because the first year after a loved one dies might always be the hardest.Plus the fact that Mother’s Day is this Sunday might make it even tougher.Plus him going back to Y&R might be helpful because he’ll be around people who knew and cared about his mother too.

We all miss her.

I miss Jeanne Cooper. She was the heart of the show.

I have been watching Y&R since its inception in 1973. I loved watch Ms. Cooper portray Katherine Chancellor every day for 40 years. It was one of many things that my mom and I did together. When I got home from work, she would call me to tell me what had happened on Y&R and then on the weekends I would go over to her house and me, mom and dad would watch the tapes together. Yes! Dad was a devoted fan of Y&R as well!

It was heartbreaking when Kiro7 Seattle broke into regular programming to announce that Ms. Cooper had passed. I looked over at my mom laying in her hospital bed that we had for her in her apartment and just bawled like a little baby not knowing that just 2 short months later, I would lose my BFF as well! I know how Corbin feels about grieving a year later for his mom. My mom was also my support system. She was always my go-to person in any situation. She also had the uncanny ability to cut through all the bull and get to the heart of each problem. I miss her soooooo much each and every day! Her 1 year anniversary will be July 25th. God speed Corbin, Caren and Colin…Your mom is looking down over you…

The one thing network exec’s and ratings grabbing writers forget is the heart and soul of the daytime drama is connection. The connection we make with those on the screen and those in our lives we share those stories with. Thank you for sharing your story of connection. God bless you.

Oh, we miss Jeanne Cooper and Katherine Chancellor. And the style and drama and emotion the women — one real, one fictional — brought to the drama. The show is not the same these days for many reasons but this is one that unfortunately cannot be reversed. I lost my mom six years ago and it is always difficult. But how lucky for the Bernsens that they have so much of their mother’s work to enjoy and to celebrate when they miss her. And how lucky are we that they were generous to share their mom with many fans who truly respect her.

I SO agree with your post Iakovos and sorry about your mom.

Jeanne Cooper and her portrayal of Katherine was mesmerizing.

JEANNE COOPER WAS THE HEART OF THE SHOW…..IT HAS NOT BEEN THE SAME SINCE SHE LEFT AND NEVER WILL BE…. ALL OF HER FANS MISS HER .. LOVE TO HER FAMILY….

You don’t have to be on Y&R to maintain a connection with the fans. You and your MOM will always have a place in our hearts and minds.

Each time when the episode airs with scenes from Mrs. C’s estate, the name her loving friend BFF, Ester V gave her, I always think that she’s still alive and in the series, just somewhere on the estate grounds, or at the office, I find myself missing her all over again. having had to meet and greet the living legend, Ms. Cooper, she was a beautiful, spiritual,majestic, the most gracious actress who truly loved her fans, and was genuine, the real deal. The show withstanding will never be the same, without her, but her presence in the story line will continue………….light a candle in her honor this Mother’s Day in tribute and honor for her.

She was the true QUEEN of daytime. She was so kind…sassy at times, but always there for her family, friends, and fans. I will never forget her…never!

Catherine Chancellor has been a household name for 3 generations in my home! She was so beautiful back in the day in all that hollywood glam era. *RIP Jeanne copper*

Mr. Corbin Bernsen…your reflecting and all (one year later) on your mom’s death is so beautifully heartfelt. My mom passed away from cancer over 10 years ago (on November 6th, 2003). Corbin…I miss my mom more and more each day. Yet…the more that I remember my mom (humor and all), the less sad that I am each day. And talking about my mom (a lot) keeps me more and more saner. Corbin…dude…you will ALWAYS be an A+ CLASS ACT in my book!!!!! Most of all, I feel like our moms are keeping an eye on us from up above…24/7 and beyond. Amen.