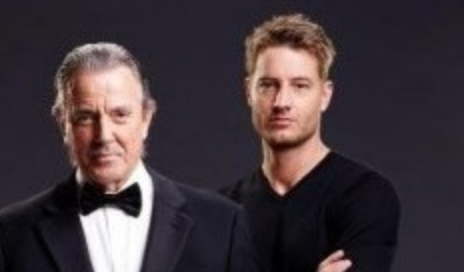 Wouldn’t this be a soapy twist! TV viewers in America have fallen in love with NBC’s critically-acclaimed new hit dramedy series, This Is Us which stars Justin Hartley (Ex-Adam Newman) in the pivotal role of Hollywood sitcom actor, Kevin.

Hartley apppears alongside an all-star ensemble cast led by Milo Vertimiglia, Mandy Moore, Chrissy Metz and recent Emmy winner, Sterling K. Brown.  In just two episodes, Justin has already received rave reviews for his performances, after his character has meltdown during a taping of his sitcom The Man-ny, and then later has to try to apologize to the network brass for walking off the job in such a public way.

Hartley spoke to Glamour about this most perfect of roles for him, the early success of This Is Us, his soap opera roots, and more.

When asked if Hartley could see Victor Newman AKA Eric Braeden on This Is Us, Justin replied: “He could be my dad’s dad! (Laughs) Milo’s dad!  He would do it probably, (Eric)’s a good guy. We hit it off right away. I think I made him laugh, which he wasn’t expecting. Our characters hated each other and Adam wanted to dethrone his father. He wants all the power. We would go at it in scenes together! He gets loud and I do, too. And then afterwards we’d laugh and tell jokes. (Eric and I) got along great. He’s got to come on This Is Us. He should watch it and do commentary! He should live tweet our show! That’d be awesome!”

DYNASTY Reboot On The Way At The CW!

In a word, YES! Would love to see Eric appear on “This is Us.”

That would be awesome. I’ve been watching Y&R since I was 10 years old everydaY over 26 years. Eric should totally do it
They have grear chemistry together as actors would be interesting to see them play different rolls together

Eric could pull it off in his sleep—I saw him do episodics and movies back in the day and he was good even way back then. It would be nice to see another soap actor take a break and do prime time.

Right–Eric owns any room he enters. I recall thinking this when he appeared in The Titanic

Hmmmmm. I wonder if doing primetime or dabbling in other ‘stuff’ is on his bucket list.
That was then, this is now. If he has the wherewithall, yeah!!!!! Go for it. But, I don’t knoooww!! I have noticed that Mr. Braeden reels a bit….very sublte, but it’s there. I am very familiar with the signs. He still looks good; but looks can be deceiving. If he has the ‘stamina’ ( LOL and HaHaHa), he should jump on the train.

Yes would be great to see Eric

Amen! Bad enough having to put up with him on Y&R!
Keep him off Justin’s show!

It shows how much these two hit it off. It would be great to see Eric on something different. I bet he would do it and Justin can put it out there as a suggestion for his bosses at NBC.

Justin was just being nice. He couldn’t get off of Y&R fast enough. Eric Braeden’s hideous reputation has been known for years. He wisely had an outs clause in his contract and got the Primetime role. Smart man. Now he doesn’t have to look back at Y&R anymore.

As far as Braeden being on THIS IS US, uh, no thank you. Why ruin a hit show with an egomaniac whose acting isn’t up to the level of the present cast?

Betty, you obviously do not like Eric. That is fine. He is in person like he is on screen, mostly. He is a tough SOB who didnt have anything handed to him and doesnt go for the bull that is served up in Hollywood. I do believe its Eric’s show. He has been there forever and is a legend. He is widely know outside the acting circles. He is very popular with football players. Some of his female co-stars say he is a teddy bear behind his rustic shell. I firmly believe he likes Justin. How couldnt you. He is… Read more »

listen; the writing is on the wall

why work with Eric Braedon

overthrew everything that is

Have a good one, dude.

I agree. As the saying goes, let sleeping dogs lye

for – ALL – intent and purpose

Michael Muhney and Justin Hartley … won the war, as it were

AND… that counts in my book… decades plus watching his sir

have at him… let’s GO

the character of Adam… brought alive this show

if it has to include EB… so it is

this at least brought some switch…. one of Victor Newmans own offspring challenged

Yes, what an awesome idea!

Maybe if enough girls dream together we can make it come true!! I’ll rub his wet back anytime!! Wet or dry

LOL…I love Milo but I don’t think he’ll be doing daytime anytime soon. But never say never, right? Besides Gilmore Girls he’s had steady prime time work. He was on “Heroes”, “The Bedford Diaries”, “American Dream”, “TheWhispers” and was in one of the ROCKY films. Dude’s in demand!

I was never into Milo…not my granola bar.

I’ve seen Eric do comedy on The Nanny. Now I think it’s time for him to do some network drama! He could play Kevin’s psychiatrist !!

Or sink in his own ship the same way he did in ‘Titanic’.

I would love to see Eric and Justin team up again. Their acting chemistry together, was wonderful. It doesn’t get any better. The two of them on YR was awesome . They really need to do a big screen film together. It would be a block buster.