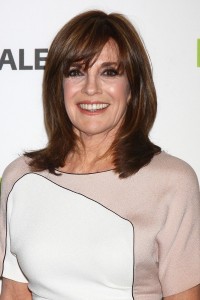 Monday night, television will say goodbye to one of its most iconic characters and the best villain of all-time, J.R Ewing on a very special episode of TNT’s Dallas (9EST/8CST).  In doing so, the cast and the viewing public, will also be saying our farewells and remembering legend, Larry Hagman (J.R.), who died of complications from cancer back in November of last year.

Look for a wake, a funeral, and some twists and turns apparently engineered by J.R. from beyond the grave during the episode entitled “J.R.’s Masterpiece”.  From what the producers and writers of Dallas have put together to honor Hagman, this episode may just be the masterpiece of the reboot of the series and for any long time Dallas fan.

Today at The Paley Center for Media’s annual PaleyFest in Beverly Hills,  the cast of Dallas was on hand for a seminar talking about the inner workings of the series, previewing what is to come, and much more. On-Air On-Soaps was there and caught up with fan favorite Linda Gray (Sue Ellen) to find out what she thought of the funeral episode, how is she doing after the passing of her dear friend, Larry Hagman, and what can we expect from Sue Ellen, post-J.R’s passing.  Here is what Linda had to say!

We heard that tomorrow night’s episode “J.R’s Masterpiece” (the funeral episode) was shown to the cast and crew at Southfork on Friday night.  Were you there … and what did you think of it?

How are you feeling now several months after Larry Hagman’s passing?  I know how close you were with him.

LINDA: I think the same things I would tell anybody, and as Larry would say, “The show must go on! Stop crying and get out there.  Put that make-up on and those high heels and go do it and be the best Sue Ellen you can.”  And I would go, “OK I got it. Alright, let’s go.”

In tomorrow night’s episode there have been some preview scenes where it looks like Sue Ellen has taken a drink and fallen off the wagon! What can preview about that?

LINDA: It’s very difficult for her with J.R.’s passing. She may have a little dip and come back up.

How do you think Sue Ellen will behave now that J.R is gone? Can we expect a good Sue Ellen, or a more villainess version?

LINDA:  I think a lot of her decisions will be based off her mother/son relationship with John Ross, and what thinking about, what would J.R do?  All sorts of things come to her mind now that she wasn’t forced to check out before for 20 years.  We all in our lives have changed over 20 years, so you can’t expect Sue Ellen to be the same as she was 20 years ago, either. We hope she has looked at her life and sort of wrestled with her demons, and come out the other side a better person, or a more cleaned up version of who she was before.

So Dallas fans, are you ready to watch the emotional episode?  What do you think of Linda’s Gray comments on honoring her friend Larry Hagman?  How do you think J.R.’s death will impact Sue Ellen?  Weigh-in!

I bet that Episode is going to be Good! Sue Ellen was a great character!

This is going to be great but sad Larry is gone. I love that the actor is back that took some time off for Y&R is back on Dallas!

i will definitely be watching – i also have my dvr set to record it!

Maybe there will be a Sue Ellen and a Gary Ewing hook up?

I can’t wait to see it. Loving the show overall!

This will be a sad one to watch tonight, Dallas will never be the same without JR Ewing, But it will survive, Sue Ellen will make out ok, She is a strong character drunk or sober.

It’s going to be heartbreaking for many reasons especially for John Ross and Sue Ellen. Mother & son are headed towards a downward spiral after his passing for a spell. When their done having their pity party, they’ll raise up STRONG & do JR’s legacy PROUD. Gone but not forgotten. RIP JR.