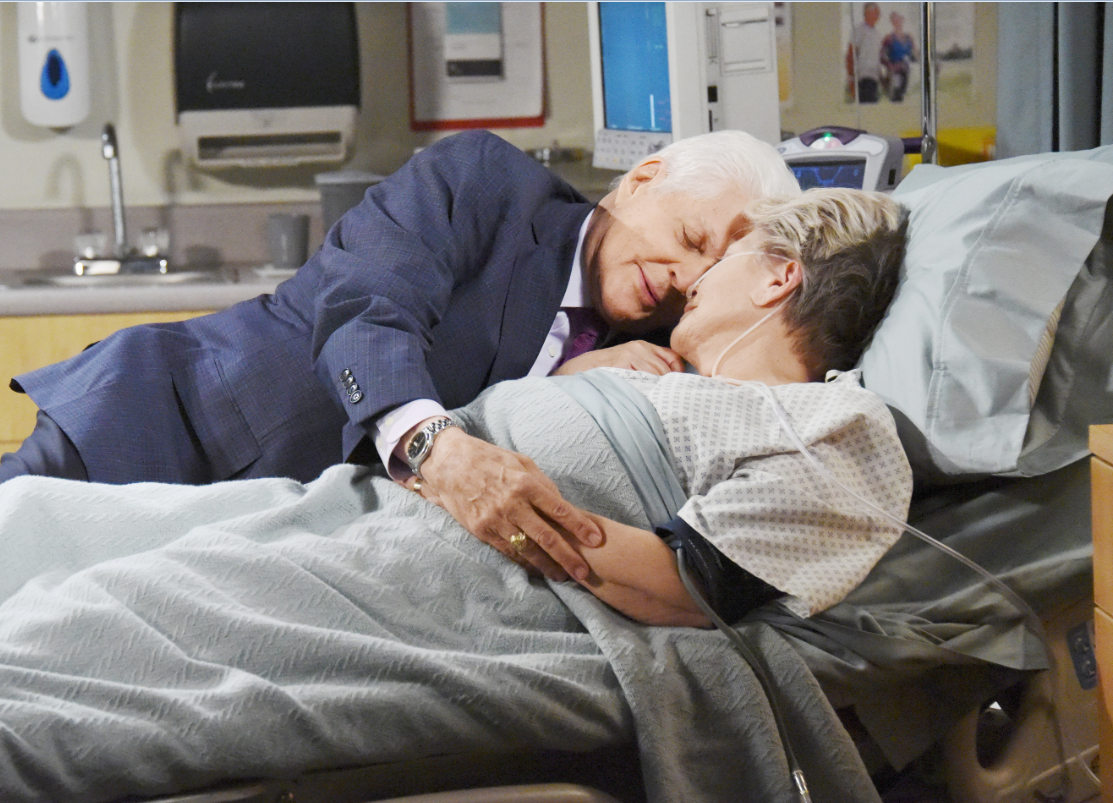 If you have been witnessing this week’s episodes of NBC’s Days of our Lives, you know that Julie suffered a massive heart attack that has rocked Doug to his core, and has made the once invincible Julie devastated that she may not survive this medical crisis to continue her enduring love with her husband.

The heart attack which came about after Julie minced words with Gabi (Camila Banus), has given veteran stars and Lifetime Achievement Daytime Emmy Award recipients, Bill and Susan Seaforth Hayes, some emotional and heartfelt material to play.  As everyone knows, the popular duo has been married in real-life for decades.

On their official Twitter handle DaysHayes, the couple shared this tweet to their followers: “Those scenes between Doug and Hope, and the ones between Doug and Julie were so beautifully written, we didn’t have to act them. The love between us played them for us. Thank you, Ron!”

Of course, Bill and Susan were referencing Days of our Lives head writer, Ron Carlivati for this storyline and giving them these impactful scenes to play which mean so much to them and the longtime DAYS viewing audience.

So, what have you thought about the recent Doug and Julie scenes, since Julie suffered a heart attack?  What do you think of giving vets like Bill and Susan the ball in this storyline? Comment below.

Angelica McDaniel Reflects On Her Time At CBS In Her Parting Words: “It’s Time For Me To Move On To New Innovative Territory”

Angelica McDaniel OUT as CBS Head of Daytime As Network Restructures

I love Julie. I hope she gets well soon!

Victor dies…Julie gets his heart….i watch in bed since its all ican do lately is watch this stuff

If anyone was around when Doug and Julie ruled daytime, then this story is going to satisfy alot of long-term viewers. I know I’m happy seeing these scenes!!!

I’m happy too. I been watching DOOLs since they aired in 1965.
Doug and Julie have always been a power couple and Doug always own a club. He had a daughter named Patty whom sung in the club and Mickey Horton had a son named Michael who dated Patty. Days of our Lives have always been a great story, that what we called them back in the 60s and 70s. Julie deserves the highest award that can be given. She goes back to the western era, because I watch her over and over now on GRIT TV

They will always be number one

Always be the heart of that shiw

How many times will “Julie” be at deaths door fighting for her life with “Doug” falling apart at her bedside?!?! We all know she will recover!!

It was beautiful,yes Julie does speak her mind without thinking a lot of the time,so if she starts that stuff people need to give her”The Look”or nudge her in the side.She wears her heart on her sleeve,always has and she loves her family more than her own life.The love between her and Doug is real,real,not just camera,role playing love.I’m praying that Julie doesn’t die,I think this story and the one when Julie”fell”down the stairs is leading to something big.Can’t wait to see what happens next.

Best thing about the show. Her feud with Gabi is a riot. It was a mistake in my view to break up Gabi and Eli because that dynamic with Julie in the mix was smoking. Julie is so good at comedy. They should have had her involving herself, Doug and Maggie in Eli’s and Hopes crime solving business a long time ago just like Alice Horton when she was outfoxing Larry Welch.

I love Julie and Doug. Hope Julie gets well soon. And really I hope,they have more blessing in there marrige.god bless you both

They are awesome and it, they deserve to run with it. If anyone can touch us it would be these two veterans.

I think the love that they have for each other Julie will survive this, but all in all the storyline between them is very beautiful.

Love these too people lots,GET WELL SOON Sweetheart and please don’t leave the show! I have been watching you 2 for a very long time and DOOL would never be the same without you too!!

They are just beautiful people, actors and characters. I consider them the present CORE of Days.

your message is like the pot calling the kettle black.

Love seeing some of the DOOL veterans get a good story line for a change, been watching the show since the beginning and characters like Doug and Julie feel.lole family!

I sure hope Susan isn’t sick for real, it’s only for the show!

Get well soon Julie! You and Doug are the “heart” of this show.

I know how they feel I lost my husband when he was only 51 that was 15 years ago and it still hurts .I think she will recover.Gabby needs a good swift kick in the butt.I can’t believe she left Julie to die like that.

They are truly a loving pair. No acting needed. It brought tears to these old eyes. Hope we don’t have to lose Stefan to save Julie though.I like and want to keep both characters.

This comment is for TPTB who are using Julie’s problem to get rid of another character, and for what stupid reason? I will not say more. I do not want to ruin it for other viewers, as you have ruined it for me.

Wish Julie wasn’t leaving I think the two should have been lost at sea or somehow went together!