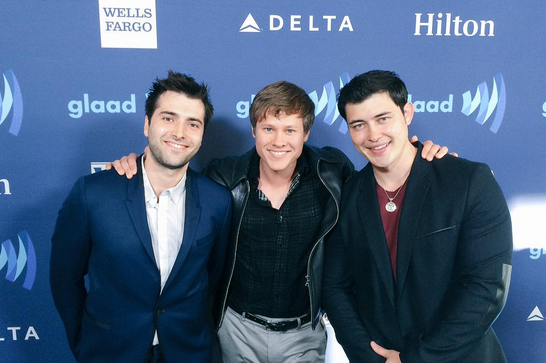 NBC’s Days of our Lives was the winner last night in the Outstanding Daily Drama category at the 26th Annual GLAAD Media Awards held at the Beverly Hilton Hotel, in Beverly Hills, California! The series bested General Hospital for the victory.

The GLAAD Media Awards recognize and honor media for their fair, accurate and inclusive representations of the LGBT community and the issues that affect their lives.

DAYS gents: Freddie Smith (Sonny), Guy Wilson (Will), and Christopher Sean (Paul) were on hand to accept the award for the LGBT storyline in Salem.

The night’s other big winners included: Transparent which co-stars former soap favorite Judith Light as Outstanding Comedy Series,  How To Get Away With Murder took home the Outstanding Drama Series,  Outstanding Mini-Series or Movie Made for Television went to The Normal Heart, and Outstanding Film-Wide Release was given to The Imitation Game.  In addition, Scandal’s Kerry Washington received the Vanguard Award presented by Ellen DeGeneres.

Guy Wilson tweeted some photos of himself, along with Freddie Smith and Christopher Sean driving to the ceremonies together and then on the red carpet!

So, what do you think about DAYS win for Outstanding Daily Drama in the GLAAD Media Awards? We say, “Congrats to all involved, and well-deserved!”

Cate Blanchett Wants To Do A Guest Spot On Downton Abbey!

Great news and well deserved. The Sonny/Paul/Will story is the best on Days and on all of daytime in my opinion. Congrats Days and the actors and writers.

@ blake – Totally the best news! The Sonny/Will/Paul storyline is the main reason I keep watching, it’s intriguing, real, honest, and totally deserving of this great award. Congrats to the writers and to the show for committing to these very worthy characters. And, to Freddie, Guy and Christopher, three professional actors who consistently deliver strong performances. What other soap right now, can say that with a very strong LGBT storyline? DAYS all the way. They’re committed to Will & Sonny and Paul. Thanks DAYS for stepping up and depicting challenging and empowering strong male characters who happen to be… Read more »

Days has so “many” reasons to BUILD around… this story line… and has the actors on DAYS are 2nd to none… with GH the potential for stir… emote… build… intrigue box office.. tune IN honestly… Leo.. you are being harsh there are so many fine actors attached to Will… Sonny… Paul and they are ALL bringing their A game… forward for the life of me… disgruntle mode I’m so over ! Daniel, Jennifer… the magic elephant story befuddles me.. where are they going with this? outside of that? I know DAYS is squandering… the potential of the canvas will Stefano… Read more »

ITA with everything Jeremy and Patrick said.

@ Patrick – I too, love other characters, the vets are tied to Sonny & Will. Grandma Marlena having a therapy session with Paul and learning of what William did. Classic. Grandma Kate encouraging Will to do whatever it takes to get to Paul’s truth. I love how DAYS utilized them, and I hope we see soon more of Marlena’s gentle coaching and words of wisdom to Will. Especially, since we have Lucas working with Will to dig deeper into Paul and Tori’s history. I would like to see Marlena help balance out Will’s choices moving forward. So, pleased that… Read more »

Its the only writing Days deserves at the moment…

not far from the truth

seems to be the only part of days that is catching

So glad Day’s won. I had no doubt. Great soap. Love you all.

Best story line on Days. I hope they wisely continue to feature the Will/Sonny/Paul story as it develops.

Congratulations on the well-deserved win!

Congratulations to Days of our Lives for their GLAAD Media Award win. I so like the Sonny/Will/Paul storyline.

Glaad to see Freddie Smith in the back seat!

New drinking game: take a sip every time Will says “my husband!” God, if I’d thought of this game sooner, I’d be drunker than Y&R’s Neil, Y&R’s Nicki, and B&B’s Brooke put together!

Thank you, Mollie! You’ve made my day! 🙂

Nu-Will (yes; I know he’s no longer “new,” but…) unnerves me. I have to fast-forward through his Sami-esque temper tantrums. Will, put on your big boy pants (and donate your cardigans) and take some responsibility for your actions and show some remorse. I think if it were another actor who portrayed Will, I would feel entirely differently. The actor just has never grown on me.

I agree with you completely, dmr!

Congrats to Days ..well deserved. Love Will/Sonny and Paul. We need to find Paul a man..;) Freddie, Guy and Christopher are doing an amazing job!

Me too. Always been a huge fan of Will & Sonny as a couple. And I have no problem with Guy Wilson. But I’m all for Paul & Sonny right now. Their past history is sooooo intriguing and the chemistry is off the wall. So PaulSon plz !!!

@ AnneVanH – I too, have always loved Sonny & Will as a couple, and actually ever since Guy took over – he’s one me over, I love his version of Will…sure, it’s definitely a different approach yet, he and Freddie, also Christopher all have great chemistry together.

I’m pleased DAYS is continuing strong with this big storyline, and I hope Grandma Marlena can help Will see the bigger picture of what his future looks like with his husband, and Aria.

correction: “and, actually ever since Guy took over – he’s WON me over, I love his version of Will…”

Very well deserved, DAYS has done a great job with this story, respectful and exciting.

Glad they are doing gay story lines. Stay with them no matter what other changes are needed or come. This is the best aspect of Days currently .