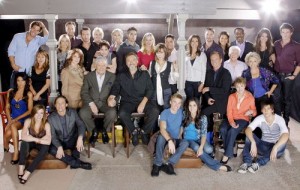 NBC released today this official statement and press announcement that Days of our Lives has been picked up by the peacock network for two more years through 2012-2013 season on this their very special 45th anniversary day. The announcement was made today by Jeff Gaspin, Chairman, NBC Universal Television Entertainment.

“Days of our Lives remains vitally creative through the years as it continues to draw new generations of viewers, especially among its loyal female audience” said Gaspin. “NBC salutes the series on its 45th anniversary and we look forward with great anticipation to working with the production team for the years to come.”

“This important and enduring series is an iconic part of NBC’s history as well as that of daytime drama,” said Bruce Evans, Senior Vice President, Current Programming, NBC Entertainment. “The creative team, cast and crew work hard each day to ensure that ‘Days’ continues to remain fresh and relevant to its legions of devoted fans across the country.”

“With great joy, I am pleased to announce the best news any soap opera could receive. Days of our Lives has been picked up through September of 2013,” said Ken Corday, executive producer of “Days.” “We extend our greatest gratitude to NBC for blessing us with the gift of such an amazing commitment.”

“We continue to be big believers in the serialized daytime drama and we’re thrilled that our great partners at NBC have renewed Days of our Lives,” said Steve Mosko, president, Sony Pictures Television. “An iconic global brand, ‘Days’ entertains millions of loyal, engaged viewers, on television and online, in the US and around the world.”

Days of our Lives (Monday-Friday, 1-2 p.m. in most markets; check local listings) first premiered as a half-hour drama in 1965 and expanded to an hour 10 years later. Today, it remains a consistent favorite among viewers of daytime television serials and is currently tied for #4 for the season among all daytime dramas in women 18-49, tied for #2 in women 18-34 and tied for #1 among girls 12-17, according to Nielsen Media Research. Through six weeks of the 2010-11 season, “Days” is averaging 2.6 million viewers.

In its 45 years, Days of our Lives has garnered numerous Emmy Awards and nominations, as well as multiple Soap Opera Digest and People’s Choice Awards. Days of our Lives is set in the fictitious Midwestern town of Salem. The core families are the Bradys, the Hortons and the DiMeras, and the multi-layered storylines involve elements of romance, adventure, mystery, comedy and drama. Days of our Lives is produced by Corday Productions Inc., in association with Sony Pictures Television. Executive producer Ken Corday is following in the tradition of his parents, Betty and Ted Corday, who co-created Days of our Lives and helmed the series for many years. Gary Tomlin is also executive producer. Dena Higley is the head writer and Christopher Whitesell is co-head writer.

I’m so glad that my favs won gold medals! Shawn, Peter, Crystal, James, Ari, and John! The Day of Days livestream was wonderful. I was able to watch the walk on the Red Carpet, autograph signing and interviews at the end. It was a great day!

A mixed bag. Glad to see the show’s elders getting romantic stories. Love the cunning of Skate and the charm of Magic. Not wild about Bope. Prefer Carbo myself. Am refusing the contrived pairing of EJ and Taylor. What a complete joke! Don’t see it happening with Ejole either, EJ’s a one woman man. Thanks to TPTB for decimating Bricole, Mate, and Phloe. You make leaving you so easy.

I will never buy EJ with Taylor. If EJ falls for Taylor then he is not the EJ we have grown to know and love. Taylor is such a turn off for me. EJ belongs with Sami they are two peas in a pod. EJ will have to do a 360 to be compatible with Taylor and I don’t really want EJ to change that much. Sami is dull with Rafe is EJ will be dull with Taylor. WHy can’t these writers get it straight and put the right people together. EJami would make a great gray couple fighting Stefano.

Congrats on the renewal! It’s a good sign for Days during these hard time for soaps. Go Days!

OMG! Smokin hawt! Loved all of them! ALL of them! Course Im partial to the Galen and Ali ones! That man is insanely SEXY! The hat thing? OMG. They’re all beautiful. Every last one of em! What I love most is that they all look like they sincerely enjoy working together. Makes it fun to be a fan!

Sexy, Hot I love it! James and Nadia wow crystal chappells sexy but Too much Galen Gering! Why they still pimping GG I don’t know kissing Ali,Ari,Nadia? I mean he’s all over God! Is he related to Tomlin or cordey what’s up with that? Anyway as long as James Scott in the show i’m watching. Micheal the slow-motion clip of Galen & Ali NOT sexy! sorry Micheal

Sami and Rafe always get my vote! Love their on screen chemistry!!! I caan’t get enough of them!!!

They all look gorgeous and from the promos seem like they know how to lighten up and have fun together. I love the creative idea of looking through a window. These must have been awesome up on the NYC JumboTron. Beautifully done, Days should be proud.

Oh and you can never have too much of Galen Gering! Come on, the guy is hot-cha-cha-cha!!!

My vote goes to Sami and Rafe!! Lovin their smokin hawt chemistry. It sizzles up the screen.
Besides being a hot couple, they are a natural-looking couple who seem to enjoy working together.

SAFE is a natural looking couple because they radiate friendship more than hot sizzling romance. Hot sizzling romance belongs to EJAMI. The video had too much Rafe and he was with a variety of women, yet EJ was restricted to very few scenes. James is the lead actor on DAYS and the emmy nominated one, he should be given priority not Galen. In any event have been given good vibes for EJAMI’s future by reliable source so the video means nothing.

WOW Exactly! You hit the nail on the head!

Hate fake Rafe but I love that Nicole will find out how arrogant and obsessed EJ really is that he would be so jealous of Sami’s /Johnny’s/Sidney’s affections that he would endanger the people around him with fake Rafe. EJ is no hero, and Taylor no heroine… so let’s end the facade.