Alley Mills decided to use her cupcakes as headphones or earmuffs! 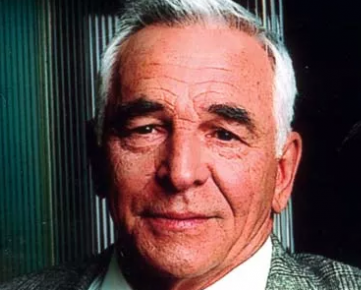 Sad news to report on the passing of former The Young and the Restless star, Donnelly Rhodes.

The Canadian-born Rhodes, who played the original Phillip Chancellor II from 1974-1975,  and was involved in one of the classic Y&R triangles between his wife, Katherine Chancellor (the late Jeanne Cooper) and Jill Foster (Brenda Dickson), passed away at age 80 from cancer.  Rhodes died  at the Baillie House Hospice in Maple Ridge, British Columbia, according to talent agency Northern Exposure.

After leaving Y&R, when Phillip was “killed-off”, which set the stage for the long, and enduring feud for decades between Katherine and Jill, Rhodes went on to star on the primetime series and spoof, Soap as the dim-witted Dutch.

In Jeanne Cooper’s interview with On-Air On-Soaps back in 2012, when asked about working with Rhodes, she responded:  “He was self-assured, nice and cocky, and a very talented actor.  I spent some time with Donnelly.  I had an affair with him, too. (Laughs)  I always say, don’t do things where you work.”

With a career that included over a 100 film and TV roles some of Donnelly’s other most notable roles included parts on: Battlestar Galactica Report to Murphy, Hill Street Blues, The Flash, The X-Files, Double Trouble, Canada’s Danger Bay and Da Vinci’s Inquest.

Watch a classic clip from Y&R after the jump when Phillip asks Katherine for a divorce.  Then share your thoughts and condolences on the passing of Donnelly Rhodes in the comment section below.

GH’s Head Scribes Shelly Altman & Chris Van Etten Take You Inside The Writer’s Room Of How A Soap Is Written!

I remember him as a caterer on the Golden Girls! He was of course, had by that show’s “Welcome Wagon”, the one and only Blanche Deveraux!!

YES! That is where I remember him from, The Golden Girls-still love that show!

I loved Donnelly Rhodes. I remember him in so many great and varied roles. Thank you Mr. Rhodes for sharing your wonderful talent with all of us. Rest in peace.

Classic soap! Mr. Rhodes enjoyed a long career, working with some great people. How wonderful we remember this talented man and his role on this iconic drama and ever affecting storyline. It still resonates.

Will never forget the scene when Jill walked into Phillip’s empty hospital room & was told he had died. Many memorable scenes between Katherine, Phillip & Jill. Sympathy to Donnelly’s family.

Oh Debbie, yes! So many wonderful memories of the 1970s years came flooding back with this sad news. I used to watch back then before going to high school classes (we had split schedules). I became a big fan of Jeanne Cooper/Mrs. C in her scenes with Philip and Jill. Mr. Rhodes also gave a sweet, memorable performance in an episode of THE GOLDEN GIRLS opposite wonderful Rue McClanahan in the mid-late 80s. Many condolences to his family.

One of my all-time favorite shows, The Golden Girls! I still watch it, never gets old!

Oh, how I loved Phillip on Y&R. Don’t think I ever forgave Jill, for taking him away from Katherine. I liked D.R on the nighttime SOAP too, with Billy Chrystal, etc.
Is it just me, or did he resemble our own Michael Fair man?

I so remember this watching this with my mom…I so miss these days of Y&R, long dramatic scenes and great drama/story lines…My mom loved Phillip Chancellor…So sad to continue to hear of losing these wonderful people like Donnelly, Jeanne Cooper then Beau Kazer died about a year of so after Jeanne…I loved Y&R from the beginning till 2006…RIP Donnelly, you will be missed and prayers for Donnelly’s family…

He was so handsome.

I know who he portrayed, but never watched him….before my time. But, I do enjoy watching the reruns of the sitcom SOAP, where Rhodes played the part of ex-con Dutch…..
RIP.

Hah….”Soap!” That is where I first encountered Mr. Rhodes, too, CeeCee! I was amazed when I discovered the actor who portrayed the thick ex-con Dutch had also played the late Phillip Chancellor who had been long dead by the time I started watching Y&R in the ‘80’s. At least it put a handsome face to the character when Jill and Katherine went umpteen rounds over her departed husband!

Soap was a great show, wasn’t it? Unless I am mistaken, it was the first role for Billy Crystal, too. Katherine Helmond, Richard Mulligan, Robert Guillaume, and Cathryn Damon were also great in it.

Hey, James,
You can catch SOAP on ANTTV—– you need to check your availability, depending upon your location…..
Love the show, and also, BENSON, where, the housekeeper, Olga? sounds just like Dr. O.
That show went to many ‘places’, which was , at the time, as outrageous as Elvis’ swinging hips, I read….LOL.
I think it must have been the first audacious program to dare tackle a gay storyline ( Billy Crystal).

James…oh, yes…Soap was DEFINITELY a great show!!!!! I found it to be TOTALLY LOL HILARIOUS!!!!! Classic example: Remember when that Burt Impostor took the Real Burt’s place??? L-O-L!!!!!

Thank you, Celia! I will check it out! 🙂

Liked him on Soap….

Don’t remember just a kid but I thought he was on longer but what a shame the Chancellor Mansion a joke and nobody left to go on with the legacy they screwed up!

Mail Young you are now making a joke out of Alzheimer’s you live supposedly what our family is living thru it is not a joke!!! You can’t let them out if your sight for one second yet Jack and the rest let Dina take taxis whatever no control what a bloody joke shame on you!

You are so right, Kay…..this is not a true, fair depiction of a person afflicted with the disease. I think many people know someone or, of someone in this predicament. My friend’s grandmother ( in her early eighties) displays very concerning actions—so, yes, these poor, poor souls need twenty-four hour surveillance. These writers, it seems, have made a joke out of Dina’s illness. I did not find blowing kisses in the courtroom, by Graham and Dina, particularly ‘funny’ or ‘cute’. Well, now we know….or do we, these two are married? Timmm has said it. Graham had the trump card all… Read more »

Sad news, indeed. Each time I read about the death of one of the original cast members, I grieve. I hope he had a very fulfilling life after his works on the aforementioned shows.

The scene is illustrative of the brilliance of both actors. Jeanne Cooper was knocking it out of the park even back in 1975!