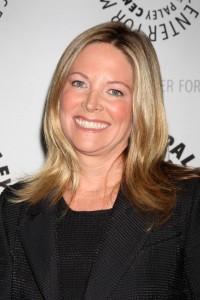 While The Young and the Restless continues without Maria Arena Bell, who was let-go by the show in favor of Jill Farren Phelps and Josh Griffith as the CBS soaps executive producer and head writer, she is staging somewhat of a comeback with a new production company and shopping some projects around to hopefully get off the ground in the very near future, according to a piece on Bell in the fashion and style section of the New York Times!

Here is an excerpt from the N.Y. Times piece on Bell, who has a screenplay she hopes to sell:  “She named her fledgling production company Vitameatavegamin, after the I Love Lucy health tonic. That screenplay, a time-travel comedy with a Disneyland element, has been written, and a marquee comedian is “circling” it, as they call tentative interest in Hollywood.  She is talking to the cable network OWN about a show. And Ms. Bell has all kinds of ideas about online and mobile programming, like a Web soap about a woman trying to keep an old-line soap afloat.”

Bell told the N.Y. Times: “I’m out on the pitch brigade. I truly feel that there has never been a better time for a creative person to dive in and try and figure out these new platforms. How do you make a great show that’s a great cable-online hybrid? How do you successfully make a serial for a mobile platform? As everyone knows — especially the viewers, who are moving on — network shows have become more cautious and watered down.  I miss the show (Y&R)  enormously, but almost a year after leaving I am really so incredibly happy.”

The N.Y. Times piece also related what Y&R mainstay Eric Braeden (Victor Newman) said about Maria’s departure from Y&R a year ago, “I was very sad to see her go. Maria understood what makes the show tick.”

So what do you think about Maria’s projects?  Especially, the one for the web about a woman trying to keep an old-line soap afloat? Intriguing?  Or, not interested?  Do you now miss Maria at the helm of Y&R, or prefer Josh and Jill’s Y&R?  Comment below!

Eileen Davidson Posts Message To Fans On Her Departure From Days of our Lives!

I am a strong believer in freedom of speech and creativity. Network TV is censored. However; Books, Music, Movies,Games, cable, internet programing etc are free from censoring. When writers have the freedom to express and create their visions then we get great media.. It is the baby boomers who mainly watch Network TV. Most younger, the now gen people, are use to upper cable, and internet programing of uncensored viewing. I see in the future network tv going pay/cable for their survival. The Boomers are the ones keeping network tv alive and grew up with their media being censored, but… Read more »

I hope it goes well for her!!
She just wasn’t good with Y&R eventhough she kind of knows the history of it but her writing and showrunner sucks as HELL…………….

I miss MAB’s writing and characters at Y&fR. Best of luck to her!

Same here. Granted, she could be awful at times … she wasn’t 1/10 as horrific as the Jill Farren Phelps/Josh Griffin team. And it’s only going to get much worse in the next couple of years.

I wasn’t a fan of her work on Y&R, but I wish her well in her new endeavors.

It was time for Ms. Bell to go. She went. And now we are seeing brighter sets and more current type writing and often on the edge of our seats. My Grandma would not be happy but at 53, it was a great move.

It may have been time for MAB to go, but what we have now is a well-documented show wrecker. JFP will have this show near cancellation before she’s kicked off.