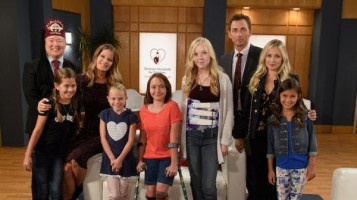 Once again, ABC’s Genera Hospital has partnered with Shriners Hospitals For Children for a story arc over a series episodes that will shed light and bring awareness to the wonderful work they do.

Shriners Hospital For Children provides extraordinary care for children in the areas of Orthopaedics, Burn Care, Spinal Cord Injury, and Cleft Lip and Palate regardless of a family’s ability to pay.

In the past few years, GH has incorporated Shriner’s into their storylines.  In 2015, it was Spencer Cassadine, who was dealing with the aftermath and burns he suffered after the fire at Wyndemere, and last year in 2016, it was Elizabeth’s son, Jake, who Monica advised needed to receive care after he was hit by a car.

Now in 2017, GH is tackling scoliosis, when Charlotte (Scarlett Fernandez) is concerned about a friend of hers who is in the facility suffering from this spinal condition.  Charlotte’s father, Valentin (James Patrick Stuart), suffered the same fate until he was given corrective surgery and treatment. Will he be the person to help Charlotte’s friend through this difficult time?  Stay tuned.  The episodes begin airing tomorrow on the September 19th episode.

In another interesting element, Shriner’s has developed the SpineScreen app that is available in the iTunes App Store and Google Play that helps parents check their children’s spines for signs of scoliosis simply by moving their phone along the child’s back. The app is free to download.  This story was first posted by ABC Soaps In Depth.

So, do you like how GH has continued its relationship with Shriners Hospital For Children and created storylines to bring awareness of the work they do?  As the story plays out in the next few days, let us know what you thought of it in the comment section below.

Days of our Lives Announces Launch Of DOOLMoji App – The First Of Its Kind For A Daytime Television Series!

@Shay. Hi, Shay, I think, as usual, the introduction of scoliosis, was an attempt in making Valentin human….with a heart. the “guys at the helm” are really going out of their way to exalt Valentin to a higher level ( almost God-like) to his daughter and especially the viewer. ( the same could be applied to Sonny—except, it “ain’t” working for moi. Yes, they could have utilized one of the others kids…maybe one of Ms Lizzie’s boys? No matter, Shaybelle; the point is, Valentin is now a hero in the eyes of the hospital, the afflicted little girl, and family.… Read more »

They brought our Spencer there for treatment. Storyline gave us insight of they AMAZING loving care at Shriners.

Is Emma back for this, too?

Which begs the question why—despite the noble storyline—-was it necessary to create yet another character in order to tell this story??? (Or a similar one?) Port Charles is already crawling with kiddos that we care for because of their familiar familial links….it would have been much more appropriate, efficient and heart-rending to concoct a curable condition for one of them which required treatment at Shriners’. It’s this sort of thing that just ruins the flow of the show…always introducing short-term newbies when the reliable current characters would more than suffice…

I am very pleased to see this association continue. It is stories likes these that raise awareness & inform people.

While the intent is good here, it just doesn’t work. This is a show that continually glorifies all kinds of violence, including the mob and various other criminals. It almost reeks of bad taste to continually feature children in peril as well. These arcs feel inserted and forced. If Claire Labine were writing and it was 1994-1996, these episodes could have been seamlessly woven right into the fabric of the storytelling! With the BJMaxie story, Emily’s introduction, or the Lulu illness that brought Nikolas on. At one time, soaps did a credible job at social issues, but those days are… Read more »

Quit watching the show. Just please make a donation to the Shriners!

Tim for your information, my cousin received wonderful financial assistance from the Shriners related hospitals. She was a 23 year old scholarship hockey student at Yale, and she came from small town Canada. Her story inspired people all across North America to donate cord blood to help others with her form of leukaemia. I know of the work they do and appreciate it! I was saying that the merging of a show that glorifies violence does not mix well with a real life Childrens hospital! And why tell me to quit watching the show? Enough people have quit that’s why… Read more »

I agree! 1996 was a huge turning point but there was a lesser one before that that led up to ’96’s changes and made them possible.

Great to hear the Shriners were a part of your life in some way. I only suggested you quit watching it since you seemed so put off. Remember this, even though the show has so much sex and violence, its just a show we choose to watch. The mob was around before Sonny. You need drama in a show for it to work. I would love for GH to focus more on the hospital. But, through Sonny and Julian’s mishaps comes lots of trips to the ER and THEN we get to see our beloved nurses and doctors. Its the… Read more »

I understand. But I am also very sick ьof people saying “the mob was there way before Sonny”! True….but they were the bad guys. They were the villains. They were not written and presented as heroes. They were criminals that the good guys could bring down..and that’s why we rooted for then. They we re not made the centrepiece of the show! They were antagonists to the heroes. We looked forward to their comeuppance! Sonny has not paid for a crime in over 20 years.

i agree with you – gh is a fictional drama that is only for entertainment and i definitley applaud them for their support of such an awesome organization…………….

I don’t mind the Shriners s/l if it does some good. The thing that gets on my nerves is the constant repeating during each show about Shriners. One announcement at the beginning or end of the episode each day would be sufficient.

I think it’s a lovely and important organization to shine the spotlight on.

why?? is kin shriner involved with the shriners in real life???

Hey there, elm1951! No, I was just making a joke about Kin’s surname. I should have added a smiley face… 🙂

Why do they have to say the name of the hospital every five seconds?

A very worthy cause! It just seems awkward when they have the characters speak the full name “Shriner’s Hospitals for Children”. I know that’s for promotion, but I assume most people refer to it as just Shriner’s.

In the past, Rebecca Herbst and Tyler Christopher did public service announcements for the hospital. Nothing this year from James Patrick Stewart.