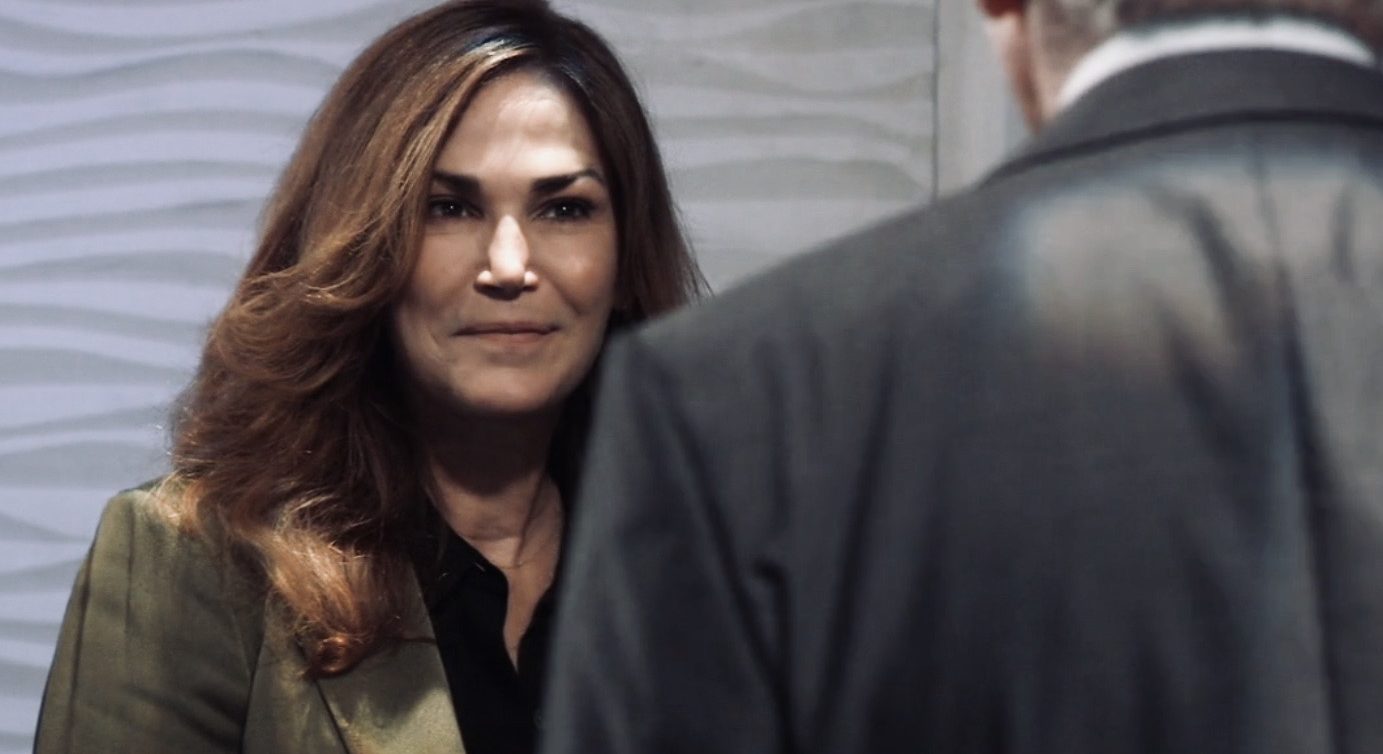 Tuesday’s episode of General Hospital brought with it the arrival of Kim Delaney back to the soap opera scene.  The fan favorite primetime, film, and daytime star has returned to the network (ABC) that made her soap-famous when she played a young Jenny Gardner on All My Children back in the early 80’s.

Fast-forward to 2020, and Delaney is actually a recast in the marquee role that kicked off Demi Moore’s career, that of ace investigative journalist and reporter, Jackie Templeton.  Moore played the role of Luke’s (Tony Geary) new love interest (following the disappearance of Laura into the fog) back in 1982.

Now Jackie is brought into the present day story by snooping reporter, Lulu Spencer (Emme Rylan).  She wants Jackie’s help in bringing down Cyrus Renault (Jeff Kober) who is creating havoc in Port Charles at the hospital.   After their brief meeting, who should Jackie run into?  None other than her ex, Robert Scorpio (Tristan Rogers).

As longtime GH fans remember, after her involvement with Luke, Jackie became romantically involved with Robert.  But that went bust when Robert married a pregnant Holly (Emma Samms) to keep her from being deported out of the country.   All of that begs the question, is Jackie the one holding Holly hostage in some twisted vendetta from years gone by?

It was great to see Kim Delaney back on daytime, and now GH fans will wait to see what the writers have planned for her.

Do you think Jackie is good, evil, somewhere in between?   And according to reports, look for Jackie to have a profound effect on the lives of Chase (Josh Swickard) and Finn (Michael Easton).

So, what did you think of Kim’s first episode back to daytime and as Jackie Templeton? Comment below.

I never liked Jackie. Towards the end, she acted like a spoiled, ill-tempered brat. I think she could have kept Robert had she not incessantly behaved like a jealous shrew, blowing up and yelling at him, when it came to Holly. Robert was not even in love with Holly at the time. I hope her temperament has improved.

This is General Hospital. Having Jackie’s temperament improve would be too easy. It would be more fun if Jackie is still obsessed with Robert and blames Holly for stealing her man.

It’s brilliant to bring Kim back as the well remembered Jackie Templeton, I think she’s a great fit for the role and like her playing against her normally sweet type. She has grown into this role, good for her.

Chase’s mom? And obviously some past involvement with McVampireFinnWhatevernamehe’susingthisweek??

What a steaming pile of unimaginative dragonshit that is.

I think Jackie and Finn had a thing years ago which was first implied when Chase first came to P.C and Finn was not keen on having anything to do with him.It was circulated by fans that he was probably in fact Chase’s father, not brother. Finn was very upset at the time that Jackie was married to his father, though we did not know what the connection was, but now is making more sense.

Ummmmm . . . OK. Of all the legacy characters available, I would not have said Jackie Templeton was the one fans were clamoring to see again. (I would not even have put her in the top 50.) Let’s hope the writers know what they’re doing; Kim Delaney deserves something worthy of her talent.

I sure hope that her performance improves. She’s swallowing half of her sentences. I think she seems very nervous, but that could be due to the hectic pace.

Thad, I think she will find her sea legs; she hasn’t acted in quite a few years. I have seen what she can do as Jenny on AMC and as Diane on NYPD Blue. This actor has got “it”. I can’t define what that “it” is exactly, but she’s got it. She has that special blend of charisma and natural acting ability which just makes one root for the character she is playing. I think she just sparks with Finn ( don’t like him with Anna) and I can’t wait to see her in scenes with her former brother, Martin… Read more »

A good twist the things that GH was made of. She might have been Finn’s girl before his father took her

Having Jackie back in town. And her having a son gives her a lot more depth.

I’ve never had the privilege of watching Kim as “Jenny”–my grandmother still talks about Jenny and Greg—-so, I welcome Kim’s presence.
Someone here had suggested ( I think it was jimh) that perhaps Chase is actually Jackie’s and Finn’s son—-Hmmmm. That would make an intriguing plot to pursue.
….this brings to mind another plot which could possibly take flight—-Nina had twins—Nelle was one of the twins. Will we see Chloe again, as Belle? — the living twin?

Hi Celia!!
Great to see you well and sassy 🙂
Ahha! Last month- I said to my friend-
Niana had twins therefore the interlocking heart
one side for each twin…….
And-00ooh yeah Finn and Mama got it on-
I think Finn and mama were a couple
and papa stole his son’s woman.
As for this Kim/Jenny – never heard of her.
I rarely see anyone in soap the news that I know.
I click in look at the soap news and go-
”who in heck are these soap people/actors??”
I never heard of them.
(( Celia- Be well and happy!!! ))

Hey, SusieQ—thank you, my friend—- I am happy and well…. I must have replied to your comments at least twice—but, did not post. We may be of a different mind on certain issues, but as adults and humans with an open mind, we can accept diversity. Furthermore, you are kind and do not resort to calling fellow-posters names. Well, you know how jimh and I had this guessing game going on over Nina and her baby. I was more than certain Kiki was the long, lost daughter—-so disappointed when my wish went nowhere. The PTB did a number on us—-they… Read more »