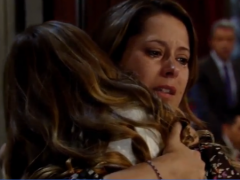 Remember the week of December 2nd through the 6th! That was when the viewers saw the efforts and the payoff of the work General Hospital had been leading up to for months!

During that ratings week, which marked the episodes where Robin (Kimberly McCullough) is reunited with Emma (Brooklyn Rae Silzer) and Patrick (Jason Thompson) for the first time in almost two years, and the fallout from Patrick and Sabrina’s (Teresa Castillo) wedding, scored tremendous numbers for the ABC soap opera who is finishing up its 50th anniversary year on a high note!

So, were you tuning into the big moment of Robin’s return last week?  What do you think of General Hospital’s ratings? Have you enjoyed the show and what the creative team and cast delivered in this major ratings week? Comment below!

TVGN Premiere's: Who Shot The Daytime Soap? Watch The Preview!

I hope the show runners realize it is Robin & Patrick together that brought in the ratings!!

I agree! but the way they are writing it how has lost people and fans are mad for wrecking Patrick and Robin and I am one of them. I hate to say it but if things don’t change I am done. I Want Patrick to pick Robin because she is his one and only love, end or story. I will tell the truth, I fast forward everything but Robin parts of that wedding. I don’t even know if Sabrina said I do. People watched to see scrubs back together ,not Sabrina get her dream wedding.

Be patient…i believe Patrick and Robin will get back together maybe for Christmas?

Kirsten Storms, Bradford Anderson, Emme Rylan, Dominic Zamprogna, Maura West and William deVry should also be applauded for the great job they did in the fantastic peaks of their story lines!

The article spells out that Robin’s return is what got the ratings. The only part the wedding played is people waiting to see Robin come in and if she would. Come on Michael and be fair and give credit where it is due and that is on Robin’s return. Many like myself left after being baited that the NB was about Robin and when she didn’t return ratings went down. They went up when it was announced Robin/Kimberly was returning. Many like myself came back to GH to catch up. Credit goes to Kimberly FIRST then JT, and Little Brooklyn… Read more »

the return of KMc/Robin is not all that brought the ratings up..
People were curious to see her back ,however-
— ”’ALL” the stories are grabbers and the awesome acting and the great stories ‘did’ play a part in the higher numbers..

I watched to see Patrick and Sabrina get married not so much to see Robin, that character is not all that much of a big deal, not at all .. lol ..

I have to agree with su0000 the shows ratings were up yes a big part was Robin’s return but AJ’s trial etc also played a big part in these episodes. Also the Friday, December 6, 2013 episode which Robin was not even in was the highest rated episode of the week

What do you mean on December 6th Robin was not in it? wasn’t that the day robin and maxie saw each other? I watch GH because of the vets, and that’s where the numbers come from.

well,
I am not a Robin fan, I could careless of her return..(wouldn’t have minded if stayed gone)
But!! all the other stories are ROKIN HOT!!!!
GH is outstanding entertainment!
I like Patrick with Sabrina, Robin and Patrick were a worn out dull couple years ago, time to move on ..

Sorry but the ratings are for the VET returns!! Robin coming back after almost 2 years is what made people tune in again… As a GH fan of almost 40 years , this show under Hacktooni is a JOKE!!! The other s/l are horribly written and many people are going to tune out when it is over! Also, their hiring people when people like Anthony Geary is offering to take a 50% cut and they wanted him to take half of it. Ridiculous the man help put GH on the map! The other s/l take forever to be told and… Read more »

Those two moments… were priceless… out of this world, through the roof ratings…. – what… IS General Hospital… #1 Emma seeing her mother…. #2 Patrick, seeing his wife these two happenings… should have snowballed… came crashing in on OUR hearts this is treading on some serious mayhem…. RC? FV? I did like the part…. Robin took control…. when Patrick showed up at the door… the following morning… to take Emma to school. Robin pointedly asked… SO? are we going home with you? blah, blah, blah… from Patrick… and Robin fired back… “didn’t we already talk to Sabrina” LOL… that was… Read more »

In my opinion, the ratings sweeps was largely due to the Robin/Emma reunion. Seeing sweet Brooklyn say “Mommy? Mommy!!” then run down the aisle to her mommy was the most emotionally charged, loving moment I have seen in over a decade on a soap! What a beautiful moment, and I am so glad I got to see it all build up and unfold 🙂 Way to go FV and RC – you know what we want and you delivered big time!!

It mirrored the moment a 5-year-old Robin ran to Anna’s arms after being kidnapped 30 years ago.

Sure, Robins return helped but it still takes good stories to keep the ratings up and GH has them…but there is still room for improvement!

Y&R still has MORE viewers over all…..

Been watching soaps a long time and GH is working the formula to perfection. When soaps stick to good story telling everything clicks, invest in your writing team– get writers that understand how the soap formula works and you create anticipation. Anticipation is what drives viewers to watch, if the viewer isn’t interested in the outcome, if they don’t care what happens next, you lose them. GH is great at building anticipation, case in point, waiting the whole episode before Emma saw Robin in the back of the church. Viewers had to watch the whole show, never certain when the… Read more »

That feeling of anticipation can be related directly to the editing, which changed a lot from a year ago. Scenes are shorter, there is much less verbal exposition, and one episode carries more stories. It just feels like GH has eliminated all the “fluff” usually found in soaps to get to the meat of things. This isn’t always good. Some fans think the writers are pushing the stories too fast & not savoring moments fans look forward to, i.e. Patrick never hearing Robin’s frantic message on his cellphone that she was coming back to him & Emma.

Love GH; all the cast members and all those behind the sense that make this wonderful show shine and keep me glued to my seat…except when I’m jumping up and down, or shouting at the TV like a nut….Just saying.

I agree with Jay …. GH is Number #1 wow, LOVE MY GH. Congrats.. All the characters are so great . Kudos to all!