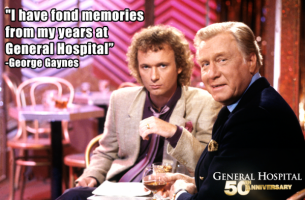 When General Hospital’s Luke (Anthony Geary) and Laura (Genie Francis) went on the run in the 80′s from the mob boss who caused so much trouble for the duo throughout their lives, actor George Gaynes was playing the despicable villain.

It was one of the most pivotal story arcs in the history of the iconic soap opera.  On Monday, Gaynes passed away at 98 in North Bend, Washington. When Gaynes left the show in 1980, Smith had been sent to prison, but as viewers know the character returned a few times over the next decades played by different actors.

It was Smith who originally hired Luke to run the Campus Disco as a money-laundering operation. Luke was always under the thumb of the notorious crime lord until he managed a way to break free. However, Smith even resurfaced in 2015 and one more time tried to destroy Luke and his family.

Gaynes, who was not only a character actor but a baritone singer, made hundreds of appearances both on TV comedies and dramas, as well as 35 films (counting both features and made-for-TV movies) and many plays, musical comedies and even operas in the U.S. and Europe.

After leaving General Hospital in 1990, Gaynes went on to appear in one of the most notable roles in his career in Tootsie, as the actor with a crush on Dustin Hoffman’s, female alter ego, Dorothy Michaels.

Gaynes, also played the absentminded Commandant Eric Lassard in all seven Police Academy films, and became well- known for his performance as Henry Warnimont on the NBC series Punky Brewster.  The actor also appeared on the soap, Search for Tomorrow.

In addition to his wife, Gaynes is survived by a daughter; one granddaughter; and two great-granddaughters. His son, Matthew, died in a 1989 car crash.

Share your thoughts on the passing of Gaynes in the comment section below, and if you watched him as the original Frank Smith on GH during the heyday of Luke and Laura’s story?

Alexis and Julian's Wedding Day: How Many Interruptions Will There Be? Watch The GH Promo!

That’s harsh, even for him. I would have been cool if he reprised his role for Anthony Geary’s farewell episodes.

Back in January Meg Mundy who played Mona Aldrich Croft from the 70s to the 80s on The Doctors passed away at the age of 101…in Nov. 2015 Fred J. Scolly who was an original cast member on The Doctors in the 60s and later appeared as Charlie Hobson-the fourth husband of Rachels mother Ada on Another World from 1977 to 1980 passed away at 92…now sadly, here is George Gaynes who played Frank Smith on GH when i was soooooooooooo young has passed away…so many good actors we have lost .

I know what you mean, yesterday I saw a commercial with Florence Henderson and even though she looks great her voice was definitely off. I was like nooooooooooooooo!

The perfect mob boss–suave, underplayed, Frank Smith was much more effective than an over-the-top protrayal. George Gaynes was a GREAT villain–soft-spoken but sinister at the same time. LOVED his acting. Unforgettable performance–played to perfection. RIP.

BTW, I did find it so ironic that the talk shows made NO MENTION OF HIS PLAYING on a soap opera. What is that about? Playing mobster Frank Smith on Genral Hospital was one of his most iconic roles.

Nancy…not just soap backgrounds. Talk shows never seem to acknowledge actor’s roles in the sci-fi genre where they also built up a big following if they have gone “legit.” And the actors never mention it. Two come to mind…Nathan Fillian (Mal on Firefly/Serenity as well as Joey on OLTL) or Jessica Alba (Max on Dark Angel). And I bet we could make a list of other actors this has happened to. It seems soaps and sci-fi are orphan genres as far as respect or career builders.

So true Nancy. He was just as instrumental in the whole “Luke and Laura” machine as Kin Shriner. Luke and Scottie represented Laura’s conflict. Scottie and Frank represented Luke’s conflicts.

MF…thanks for reminding us of George Gaynes whose Frank Smith character gave us some great Luke and Laura storylines. Coincidentally I watched Tootsie over Valentine weekend on a movie channel. Always thought George/Dr. Van Horn looked familiar. Now I know why. And I loved it when he serenaded Dorothy/ Dustin in his baritone voice. One of my favorite movies along with Soapdish. Wonder how true they are to the real inside world of soaps.

Rose, it didnt even click the “Frank Smith” was on “Punky Brewster!”

I was in high school and would watch GH with my older sisters during the original Frank Smith saga. Great memories of a great period in American TV history.

R.I.P. Mr. Gaynes. Thank you for the fond memories. Condolences to his loved ones.

Rest Mr. Gaynes! Sorry to see you go and sorry you had to witness the revival of your character in 2015! That was as bad as Evil “lil” Jake returning from the dead! I just watched one of the “Police Academy’s” recently. He was great in all them and will be missed!

I liked him in Tootsie and Police Academy. RIP

Tootsie, another great one he was in.

Only one of the FS recasts was worth his salt … Mitchell Ryan. But Gaynes was the MAN! So smooth! R.I.P.

One of those actors who cared more about his craft than being a star. He was committed to all of his work and will certainly be missed. May he RIP.

I saw him in the 50 th anniversary GH specials online . However Gaynes will always be remembered for the part he played on Punky Brewster by me and many others . Punky was my childhood ! Of course we also remember him on Police Academy but he moved me and he touched me in Punky Brewster .

I certainly remember and loved him as Frank Smith. I have enjoyed his many other performances too. May he RIP.

Oh man, I liked him as Henry on Punky Brewster and the Police Academy movies. He was in so many thing. And to live to 98! Wow!

He was also great in one of my all-time favorite series, “The Days & Nights of Molly Dodd.”

I watched him when he was on GH. He was forcing Luke to marry his daughter, Jennifer, played by Lisa Marie. He’s the one who hired Hutch to kill Luke and Laura when they went on the run after that great fight scene on the boat between Scotty and Luke. Happened right after Scotty found the letter Laura wrote to Luke, admitting he raped her. Those were truly the best days of GH. George Gaines was always Frank Smith to me. RIP, Mr Gaines!