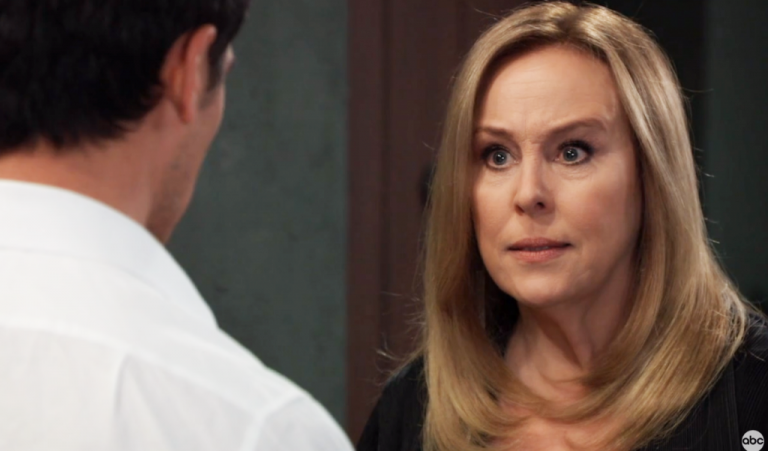 This past Monday’s episode of General Hospital was one of the series best installmnets in recent months filled with long awaited confrontations and reveals.

The cast at the epicenter of it which included the talents of: James Patrick Stuart (Valentin), Cynthia Watros (Nina), Marcus Coloma (Nikolas), Maura West (Ava) all had stellar moments.

However, there is nothing like getting to see the icon herself, Genie Francis (Laura), do what she does best; the momma bear who is at once shocked and overjoyed that the son she grieved for over three years was very much alive, and the flip side of the anger over the fact that he let her, his sister, and most importantly his son, Spencer, continue to believe that he was dead, all for his vendetta and quest for revenge against Valentin Cassadine.

For it was Valentin who was the man who shot him and now is no longer the heir apparent to the Cassadine throne, now that the codicil said that it all belongs to Nikolas and Valentin was Helena’s son, not Mikkos’.

The thing of it is, everyone is great when Francis does her performances, and you could see that in the work of soap newcomer, Coloma, who you could just see through his eyes the disappointment and despair he caused his mother all these years, by Francis’ mesmerizing delivery.

Beat after beat in that episode, Genie brought the fire, the sorrow, and the wisdom, as Laura to every moment.  It was also well-written that Laura did not just have a happy reunion with her son, but a complex one fraught with issues to be ironed out.

Then, in the punctuation of that episode, was there anything better than watching Laura’s jaw-drop when Ava struts in telling Nikolas it’s time to tie-the-knot?

That is why Michael Fairman TV names Genie Francis “The Power Performance of the Week”.

Let us know in the comment section below, if you enjoyed Genie’s performances as much as we did.

emmy nominations for sure

Genie Francis is the VERY best of the VERY best. TPTB at GH should appreciate her way more and have her front and center MUCH more often. She is a force and Laura is a character that we cherish. Many of us were kids when we started watching the Left Handed Boy days on GH, which still puts us in GHs prime demographic. They need to respect the core long term audience more.. one way of doing this would be to feature our characters and our families and stop shoving newbies, not connected to the core cast, in our face.… Read more »

Well said, Sus! Would love to see her EVERY day. She IS under-utilized. She glows!

Saw that one coming from all the way down here in Hell! First she’s gonna hug him, out of relief that he’s alive. Then smack him upside the head for letting his whole family – especially Spencer – believe he was dead for three years.

Which is exactly how I would expect Laura to react. So at least the writers got that one right.

NuNik just isn’t cutting it for me. He has no sex appeal or chemistry with his co-stars. Has he even hit puberty yet? Is the facial hair supposed to make him look “tough?”
Genie Francis always brings it. Insipid Lulu can go and cover school cafeteria “stories” off-screen.

Hi, DMRR,
We usually agree, you and I, however I find nuNikolas soooo sexy!! His eyes are a little blood-shot, LOL—-but his mouth is perfection ( like my husband’s, LOL)–those lips!!
Genie gets more and more beautiful—-her performance floored me. WOW!! Every nuance was delivered with incredible precision—her movements; her facial expressio–her indignation and hurt. Superb!!

Hahaha. Maybe I am comparing him to Tyler Christopher, who will always be Nikolas to me.
& yes, Genie is incredible!

Also, I wish that they didn’t dress Genie Francis like an old lady.

I remember when she wore purple or lilac a lot. Looked beautiful! Yes, the costumes are too conservative. I’d like to see her dressed informally, in jeans, once and awhile. Her hair looks beautiful. And her face, always.

Did we enjoy Genie’s performance? It was worth tuning in for! Finally some real emotion about characters we care about and have history with. Hopefully being part of this story will be good for nuNikolas in “raising his game”. Though I like Marcus, right now, Nikolas’ “threats” are giggle-inducing and during his reunion with Elizabeth, she wiped him right off the screen. But I’m still hopeful. Meanwhile, more Laura can only be a good thing.

GH has the best of the best actors;
problem was- they were given horrible material for the past two years
(if not longer)
Now;
The great dynamic thrilling ”’ Cassadine’s”’ are back!!

With the loved Cassadine back in action, now, it’s in the hands of the writers.
Will they fluff it up
or
give us on the edge suspense, drama, intrigue and mystery..
time will tell.. (hoping for the best!!

Horrible material, yes, Su–and for much longer than 2 years, I’m afraid.
I remember drama–some of the scenes (earlier years) are seared in my brain. So well executed.

NuNikolas has good chemistry with Liz..Franco with Ava..and Britt returns and paired with Valentin while Nina and Jax work the best..meanwhile i hope tptbb seen Genie’s performance and keep her front in center..storywise, i did not like her slap Nik..so kept it from Spenser that he is alive..would laura prefer he remain dead..she should be a little angry but more grateful he is alive!!!!

The legend Genie Francis showing everyone how it’s done. When you see those eyebrows raise up, the “you know what” is about to hit the fan. So many wonderful performances in that Monday episode. GH is on fire right now, and it’s showing in the most recent ratings, +207,000 viewers from the previous week, and very close to catching Y&R in the 18-49 demo. Hope they can keep the momentum going!

of course Genie was great, that’s nothing new, and so was the whole cast. its great when the writers get their ducks lined up and we get to see the whole cast just shine. GH has the best ensemble cast, and when the writing matches their talent then its explosive and epic.

I love when gene francis is on. She is the best. And as a mother I could see every emotion in her eyes n face!! Job well done Laura!!

IT IS ABOUT TIME ,LAURA LET HIM KNOW THAT SHE,SPENCER,AND LULU HAVE BEEN GRIEVING FOR HIM FOR THREE YEARS