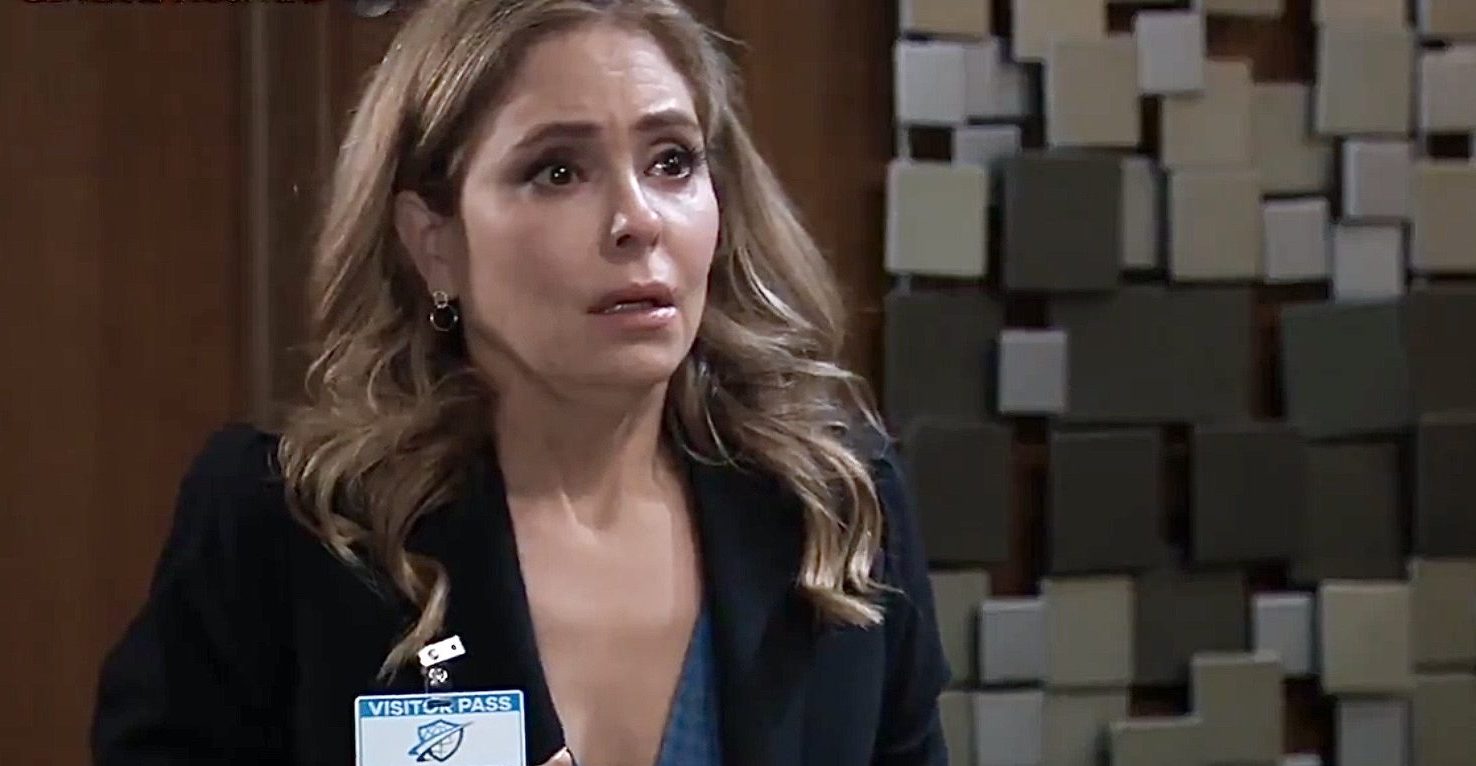 Let’s just make this official as we tweeted about it last week when these scenes aired on Tuesday.  And let’s just say, that Lisa LoCicero (Olivia) could very well receive another Daytime Emmy nomination next year in the Outstanding Supporting Actress in a Drama Series, if these moments are part of her reel.  LoCicero was previously nominated in 2015 in this category.

Now on to that performance that had everyone a-buzz on social media after it aired.  In the scenes, Robert (Tristan Rogers) has worked his WSB contacts to get Olivia to Geneva to secretly see her son, Dante (Dominic Zamprogna), who is suffering from severe trauma and PTSD and is at this facility for treatment.  After traveling half way around the world to get there, with anticipation and wanting to hold her son and be there for him – when she arrives the doctor (Christopher Cousins) tells Dante his mother is here to see him, but Dante refuses to let that happen.

When the doctor tells Olivia that Dante will not open the door to his room to talk to his mom and come face-to-face with her, she goes into momma bear mode, releasing such heartache and anguish, just wanting to see Dante, but she is met with a steely shut door instead.  But as viewers saw, the scenes were made all the more poignant by the split screen; where Dante is on the other side of the door – heartbroken hearing his mother’s cries.  Dominic Zamprogna, who is always stellar, was also moving in these moments.

However, it was LoCicero’s ability to call up such deep rooted love and pain for her child, that any parent could relate to, which broke our hearts, rang so true, and showcased Lisa.

Later in the week, we also see how Liv was there for Robert in return  – and the two are now off on a mission of their own to find Holly (if she is indeed very much alive) which is sure to put a further wedge in her marriage to Ned (Wally Kurth).  That begs the questions, too.  How would you feel about a Robert and Olivia pairing…or would you be rooting for Olivia and Ned to work through their issues?

Through it all, it was Lisa LoCicero who grabbed our attention, brought out the hankies for all of us, and truly compelled the audience.  For all of these reasons, Michael Fairman TV names Lisa’s work The Power Performance of the Week.

So, what did you think of Lisa in these scenes with Dominic? In case you missed them, you can check them out below, then share your thoughts in the comment section.

WATCH: Dante didn’t give Olivia the warm welcome she was hoping for. @lisalocicerogh @dom_zamprogna #GH pic.twitter.com/VW5MX1oguO

Robert is an agent and could find Holly on his own if he had to. Also, doesn’t Olivia have responsibilities at home like a child, a husband and a job? Searching for Dante I totally understand. But running off with Robert in search of Holly, NO

Liv has the same babysitter as Sam and Jason!

I am going to say it: since returning from the pandemic-mandated break, Lisa LoCicero has been delivering, on a consistent basis, her best work in the role of Olivia, and I can only hope it will continue! Kudos to her; her Emmy is coming!

I would have selected Sharon Case from Y & R.

Sharon, hands down! Olivia on GH yells her lines too much!

I missed most of Olivia’s scenes because I FF’d them. I’m sure Lisa is a lovely person, but I can not stand Olivia. Her whiny voice is most annoying, and all her scenes are overacted. Better direction would help, I’m sure!

LiLo has been on fire since the show returned in early August. The scenes with Dante at the door were icing on the cake.

The show will probably go down a heavy flirtation route with Olivia and Robert (as LiLo is a longtime fan of Tristan), but Olivia needs the Quartermaines and they need her. For the past 6 weeks, she and Ned have played a classic soap plot of a happily married couple facing obstacles. They’ve quickly become a favorite couple to watch.

I thoroughly agree. Lisa was absolutely wonderful. Only a mother would understand her pain and knowing her child was suffering the same too, only a few inches away. For one thing this woman is as loving and compassionate as can be. She is not phoney and tells it like it is. Should she be with Robert, I don’t think so. I’d rather see her work it out with Ned. Robert is a sweetheart but let him be that with some other woman, probably his ex Holly, which he acts like was the love of his life, and I thought all… Read more »

Make Ned and Olivia a stronger pillar couple. Don’t make them boring, but give them rich stories and a great life at the center of Port Charles society. The actors are so engaging. The over-the-top drama and plot lines wear thin, and Olivia and Ned help ground it.

When I think Robert and Olivia, I think “odd couple” but they are great together .Am loving their scenes in Monte Carlo, what a pair! I like her and “Nedski” but he looks now even more stodgier than usual. He’s so rich, influential, etc. Why can’t they give him more swagger, like Jax for instance.

Boy this week with Robert and his spitfire sidekick was pretty exciting. I remember that rotten Rudge guy when he was Julian’s older sister Olivia’s henchman. Still as creepy as ever! Iam surprised that Scorpio gave up that easily just because they were told they found Holly’s ring on a dead body. Doesn’t mean it was her body.Could be anyone’s body,maybe Cassandra’s. Hopefully he was biding his time to check it out further. There seemed to be total acceptance from Holly’s son too, so that is wierd also.