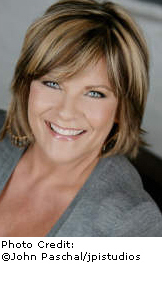 In a fascinating and revealing finale to Guiding Light,  TV Guide Canada’s Nelson Branco interviews Guiding Light’s Emmy award winning Kim Zimmer (Reva). During the interview, Branco and Zimmer touch upon a myriad of questions and topics that fans of the show and long-time followers of the amazing actress want to know.  Always open and honest with her feelings, the interview is a must read.  Here a few excerpts!

TVG: Soaps are still living on but on prime time. I think soaps shot themselves in the foot when they didn’t modernize their soaps in terms of casting and storytelling after shows like Six Feet Under and Sex and the City provided a much more realistic and entertaining canvas. O.J. Simpson didn’t kill soaps.
KZ: I completely agree with you. Except for the No. 1 show on daytime, Y&R. They replay the same story over and over again with the same cast, day after day, week after week, month after month, year after year. Those veteran actors stay because they are a smaller cast and whether or not they are repeating the same age-old stories, the fans keep watching because they know what to expect on Y&R which is a very valuable thing — consistency. No one over at Y&R is trying to re-invent the wheel. I hate that cliché, but that’s what I reference when I speak about what GL was forced to do under the guise to keep us on the air. Which I refuse to believe was really the case to this day. I still believe we were used as a guinea pig. And we paid the price.

TVG: Over the past two years, it has been unimaginably horrific and extremely painful to see this iconic show dissolve into a joke. You’re a smart cookie — would you ever consider working behind the scenes as a producer?
KZ: All I know is that I wanted to scream from the top of my lungs when I saw how our show was being run over the past two years. Could I have done it any better? Well, I think I would have put up a better fight — that’s for sure! Or if I was in Ellen Wheeler’s position, I would have said, “You are raping the show. No, I won’t produce GL this way.” I give Ellen credit for trying to be the second coming. [Laughs] I had a really hard time with the new production model because it affected how the writers wrote our show — and that killed us in the end. In turn, the viewers didn’t relate to the story or our characters. Originally, Ellen’s initial concept was for the viewers to feel very close to the actors so that you could literally smell the flowers they were planting in their garden. Ellen wanted to know what kind of flowers each character planted in their garden.

Advocate.com EXCLUSIVE with "OLTL's" Scott Evans, and his mom, Lisa!

60 Minutes profiles the end of Guiding Light this Sunday!