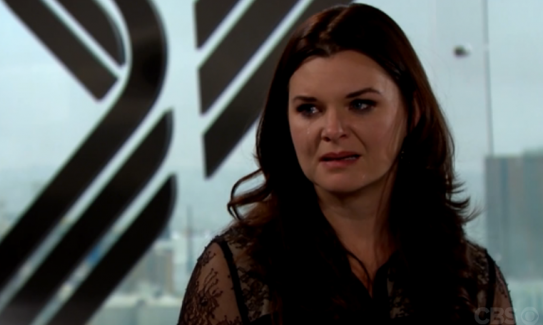 It’s a very busy time for five-time Daytime Emmy winner Heather Tom (Katie) on The Bold and the Beautiful! First, the actress revealed on Saturday via her Instagram account that she is indeed prepping to direct her second episode of the CBS daytime drama series.

Heather will be directing this Wednesday on February 3rd, while viewers will see that episode air on March 14th.  In her social media post she expressed: “Just sitting here doing some work for next week! #director”

But at the same time as she is busy behind the camera, Katie has major story coming up that kicked-off this week when she found her sister Brooke (Katherine Kelly Lang) professing her love for her husband Bill (Don Diamont).  Later, When Brooke finds her almost passed out on the floor at Spencer Publications,  after Katie took a drink to calm herself after overhearing Bill and Brooke, Katie reams Brooke for wanting to steal her husband.  Then, Katie reads the riot act to Brooke, and basically tells her she is no better than a common hooker!

Watch Katie laying the smackdown on Brooke after the jump.  Then let us know … are you glad to see that B&B is letting Heather direct more episodes of the soap?  What were your thoughts on Katie telling off Brooke?  Heather shared in a tweet last week that the story is not going to be the same ole’ same ole’ triangle,  so what twist do you see coming next? Share your thoughts in the comment section below!

On WATCH WHAT HAPPENS LIVE: Eileen Davidson, Michele Lee & Tracey E. Bregman Weigh-In: Are 'Real Housewives' Or Soaps More Shocking? What Was The Y&R's Cast Reaction When They Learned Eileen Was Joining RHOBH? Plus, How Knots Landing Influenced 'Housewives'!

I don’t even watch B&B but Heather Tom is always on target in her scenes. That girl is spectacular. Kudos to her for a great display of her acting chops once again. Her acting reel from last year’s Daytime Emmys was just out of this world great. And this should earn her another. Bravo!

I love her acting and it’s so real and great to see that she enjoys her work. I hope she stays with Bill or if not someone new that really loves her. I hope to see her son on the show soon.

Great acting by Heather Tom and Katherine Kelly Lang… but here we go again. Just when it seemed like Brooke was going to be given a good story-line…she’s back to being the fall guy!!!

What about Bill??? He started it! And let’s not forget about Dishonest, Selfish, Manipulative, Self-righteous Ridge!!! He used women, is currently concealing a lie from his son about his unborn “grandson”. But oh right! Remember he dropped Brooke because she was dishonest and he wanted a peaceful life! Such Crap!

When are these double standards going to end for my favorite characters..Brooke Logan, Sharon Newman, etc.

I think I’m going to take another break from B&B; Y&R.

Also…what is Michael Muhney doing these days! He was wonderful. Black listed it seems unfortunately!!

Ollie, I couldn’t agree more… Y&R’s Sharon and B&B’s Brooke are the heart of each show, and the actresses deserve much praise and Emmy glory!

Now, Michael Muhney was an awesome actor! It’s reprehensible the way he was treated. Talk about being a fall guy…

I don’t like Brooke at all. I especially hate the triangles she’s always in but this story with Katie who is always playing the victim. Maybe she should remember the wedding Brooke & Ridge we’re having when she pretended to pass out just to keep them from getting married. I wish Brooke would have slapped her back because she needs it. If I could give Katie advice I would say get a backbone and stop playing the victim with the heart condition & if I could give Brooke advice I would say you don’t need a man and for gosh sake the next time poor victim Katie slaps you, SLAP HER BACK.

Why are they repeating this already “done to death” storyline?!?!?! The Bold and The Beautiful can be very Monotonous & Slow and sometimes it takes a lot out of me to remain a fan of this show, but that’s just a personal struggle.